Awards season is almost upon us. And there is one question on every Eurovision fan’s mind: could Will Ferrell and Rachel McAdams’ Netflix spoof Eurovision Song Contest: The Story of Fire Saga take home any awards? That’s looking increasingly more likely, as American music industry magazine Billboard has named “Husavik” as one of their early predictions to pick up an Academy Award nomination for Best Original Song.

The songwriting trio behind “Husavik” — Savan Kotecha, Rickard Göransson and Fat Max Gsus — are tipped to receive an Oscar nomination for their work on the Eurovision movie. The fan favourite show-stopping ballad “Husavik” is one of Billboard’s early picks for Best Original Song.

“Husavik” is the 11 o’clock number from Will Ferrell’s Eurovision Song Contest: The Story of Fire Saga. The song is a touching piano ballad about the Icelandic hometown of Rachel McAdams’ character. It features lead vocals from My Marrianne — also known as Melodifestivalen star Molly Sandén — as McAdams mimes her lyrics on-stage. “Husavik” proved extremely popular with fans, reaching the top ten of the worldwide iTunes song chart.

Usually, films are only eligible for Oscar nomination if they have received a theatrical release. But this year, that rule is changing. Now, films that received their first release on streaming services are also eligible. This means we can expect to see Netflix, Disney+ and Amazon Prime original movies on the ballot. The Academy made this rule change in response to the impact of the COVID-19 pandemic on the film industry. Public health restrictions had resulted in delayed releases and cancelled premieres.

Netflix launched its Oscar campaign for the Eurovision movie in October 2020. The “For your consideration” website highlighted the virtues of what Netflix considered to be its most prestigious movies. It targeted members of awards voting groups like the Academy of Motion Picture Arts and Sciences that presents the Oscars.

If it gets the nomination, “Husavik” will be up against some fierce competition. Also tipped to receive nominations are tracks like Janelle Monáe’s “Turntables” from All In: The Fight for Democracy and Justin Timberlake’s “Just Sing” from Trolls: World Tour.

But the dream of award show glory doesn’t stop there. In November 2020, the Eurovision movie picked up a Grammy nomination for Best Compilation Soundtrack for Visual Media. There, it’s up against soundtracks from box office hits JoJo Rabbit and Frozen 2.

For now, we will have to wait to find out if “Husavik” scores the Oscar nomination. The full list of nominees will be published on Monday 15 March, ahead of the 93rd Academy Awards on Sunday 25 April.

What do you think? Could “Husavik” win the Oscar for Best Song? Let us know in the comments below! 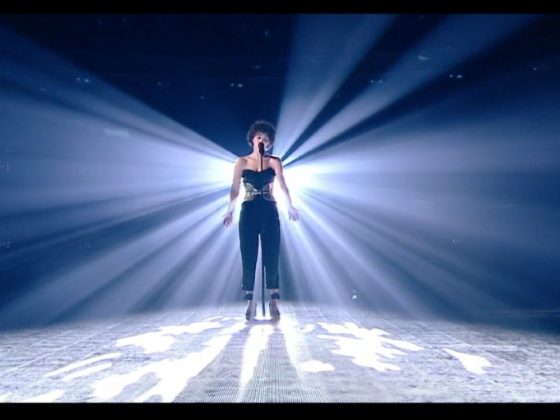 Definitely YES! 2020 was influenced by covid and not many mainstream movies came and brought any great song. But Husavik made it and it would make it in my heart even without any covid. The song is literally captivating in any of its versions (movie one, but also the acoustic one). There was not such an amazing voice for long long time. Hope Molly Sandén not only gets Oscar but also more opportunities for another movie songs in the future. She really deserves it!

That was quite simply brilliant. Acted and sung. If that doesnt bring you light in a dark year then there is no hope for you

Volcano Man should be nominated! Hahaha

i would be so happy if “Husavik” made the list and won!

Fingers crossed! Such a gorgeous magical song that took my breath away first time watching Fire Saga, Don’t forget the Golden Globe nominations are this week too as Oscar season is well and truly under way!

“Husavik” is the only good thing in that movie though.