Gebrasy has touched thousands with his ballad “Where’d You Wanna Go?”. After winning both heat two and the semi-final of Pabandom iš Naujo! 2021 with maximum points from the jury and the public, he’s now seen as The Roop’s main competition in Lithuania’s national selection.

Scroll down for “Where’d You Wanna Go?” lyrics

Gebrasy — whose real name is Audrius Petrauskas — is a 26-year-old singer-songwriter from Kaunas and a former X Factorius finalist. “Where’d You Wanna Go?” is his fourth attempt to represent Lithuania at Eurovision, and the second attempt written by himself.

He has dreamt about a career in music and Eurovision for a long time. He graduated with a degree in English Philology and hopes to be able to make a living from his songs, which is currently hard due to the pandemic. “The more music I manage to release, the happier I will feel”, he tells Lithuanian broadcaster LRT.

Before entering the 2021 edition of Pabandom iš Naujo!, Gebrasy participated in the 2017, 2018 and 2019 selections. In 2017 and 2018, he performed songs written by amongst others Ashley Hicklin and Eurovision 2018 fourth-placer Michael Schulte.

In 2019, he penned the entry himself for the first time, performing under the pseudonym Gebrasy. He chose the name — which had been his nickname since he was eleven — since his first name “Audrius” was often mistaken as “Andrius”, a more common male name in Lithuania.

Before the success of “Where’d You Wanna Go?”, Gebrasy’s entries enjoyed mixed results. While he made it up to the sixth heat in 2018, he could not move past the first round in both 2017 and 2019. However, Gebrasy received a respectable jury result in all his attempts.

What do the “Where’d You Wanna Go?” lyrics mean?

“Where’d You Wanna Go?” is a result of Gebrasy’s creative collaboration with composer Faustas Venckus. In general, Gebrasy reckons that writing lyrics is one of his favourite things to do. He described the process to LRT, saying that the act of writing the song came incredibly easy to him:

“Sometimes the most beautiful songs are written in just half an hour and you can’t imagine how it happened,”

The singer from Kaunas adds:

“The song itself is a story of unrequited love, but as it ends, it is left to interpretation. There are various details associated with driving and that sense of strong connection is equated as a journey, as relationships can be tortuous, sometimes things move very fast, sometimes slower, and the duration of a relationship is also completely unpredictable.

This song is about the fact that both main characters of the story, although they love each other, realise that they will not be together in the future, the feelings fade. Finally, there is even a metaphorical comparison of that end with an accident. It is imbued with many different lyrics that anyone can relate to.”

When asked whether the song was related to things he experienced himself, Gebrasy answered:

“No, the song isn’t about a story that happened to me, and it’s not hard to guess. Because I sing about driving, and I haven’t gotten my license yet.”

Where’d you wanna go?
You said, “I don’t care at all
As long as I’m with you”
Oh-oh, hands gripping the wheel
As you told me how you feel
Oh-oh, eyes staring through glass
We’re running out of gas
I thought that our enginе would always work
It’s time for you to go where I can’t follow you
Oh-oh-ooh

What do you think of the “Where’d You Wanna Go?” lyrics? Do you want the song to win Pabandom iš Naujo! 2021? Let us know in the comments.

Read all of our Lithuania Eurovision 2021 news. 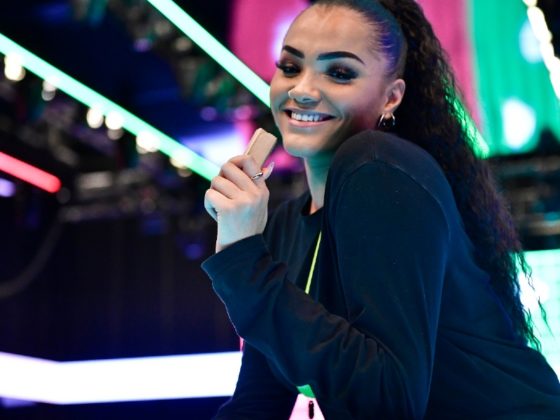 This song is so beautiful, it’s a pity that you only have eyes for The roop. Anyway, i’m sure Gebrasy is gonna represent his country veryyyy soon, cause he has the voice and the talent writing lyrics.

Hello.Its very beautiful song… i can’t stop listening.i showed to my colleagues at work (they are English people) and they said is amazing song is much better than the roop.i like the roop also,but this song i like more.good luck for Gebrasy. UK

Gebrasy is one of my favourites so far but it sucks that Lithuania will probably send The Roop again. Not a fan of Discoteque, but I guess it’s the only option Lietuva have if they want to do well.

I absolutely love this song, possibly more than The Roop. However it breaks my heart to say that Lithuania has to send Discoteque to achieve in Rotterdam.

Why??? This song can have a good result in Eurovision. He sings 10 and the song is jury friendly.

I agree whit Neil, I like Gebrasy ‘s song also very much. I hope he will be the winner, but I think The Roop goes to Rotterdam with their song which I like too.

I know y’all r gonna hate me for this but I like Gebrasy’s song better than the Roop’s….

It’s Fine to have him as a personal winner,

I do too! I don’t care about the haters 😉

Lovely song! Good luck to him in the Final.