The renaissance of Duncan Laurence‘s Eurovision 2019 winning song continues. After simmering around the low end of the UK Singles Chart, “Arcade” has now shot up to the top 40, this week sitting at No.39.

The Top 40 appearance follows “Arcade” making this week’s UK Trending Chart, which picked up on the song’s increasing popularity.

The position of “Arcade” at No.39 is its highest UK chart place yet.

Following the Eurovision grand final performance, “Arcade” debuted in the UK chart on 30 May 2019 at No.67. Its second appearance in the chart was almost year and a half later, when it re-entered early this year on 14 January 2021 at No.90.

Though at No.39, “Arcade” has a little way to go before it overtakes Daði Freyr’s Eurovision 2020 song “Think About Things” which peaked at No.34 last June.

The song’s continued success is largely related to its popularity on TikTok. The refrain “All I know, All I know / Loving you is a losing game” has struck a chord with TikTok creators.

Back in October, “Arcade” had gone viral on TikTok, with fans using it to make “Dracotok” videos. The videos highlighted a cut scene from a Harry Potter film, showing the good side of Draco Malfoy.

The continued popularity of “Arcade” shows that a Eurovision winning song can have a new life beyond the song contest and the new role that TikTok can have in helping a song find a new audience.

While TikTok has a reputation as favouring songs with catchy dances, the success of “Arcade” shows that sometimes having a well-written song that connects with listeners is what matters the most.

And with Eurovision 2021 just months away, will the next edition of the contest give us another TikTok hit? 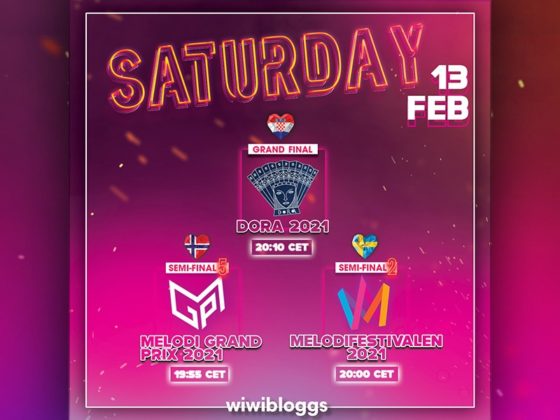 I’ve always been surprised that Arcade did not take off after ESC in countries like UK and Ireland where songs like Arcade and singers like Duncan usually enjoy radio success. I guess it wasn’t a good timing as it’s almost summer and people want something uplifting to listen to. So happy for Duncan, he’s talented and a well-deserved winner. I am still confused how it did not win the jury vote and entries like Proud and that Swedish song got a few more points, it’s crazy! Anyway, I think it will get a new peak next week (fingers crossed for… Read more »

I’m surprised it didn’t happen sooner, honestly. The UK loves singer-songwriter stuff like Lewis Capaldi or Ed Sheeran and Duncan here blows both of them out of the water.

On a related note: even though I’m pretty sure I played most of the 2019 songs for my family before the contest, my sister didn’t know “Arcade” was a Eurovision song until it blew up on TikTok. I guess the real mark of a Eurovision winner is becoming a TikTok meme, seeing as now “Arcade” and “Toy” have gotten a boost of popularity two years after their respective victories. Could we do this for other Eurovision winners from longer ago? Is there any way to make “Un banc, un arbre, une rue” a meme?

Tik tok is a bubble, a lot of songs that became viral are not the best, and despite the million daily streams, we all know who is the true, shining and talented star of Eurovision in these recent years.

Meh this guy is a flop, like any other ESC winner… comments here are so cringe lmao talm bout “unstoppable” jaksjsjshsjsjsj

A FLOP??? Hahaah come on man, everything but a flop..

A flop? LOL. A flop wouldn’t come in the UK CHarts Top 40 2 years after its release.

Maybe you are a flop,lol

I still find it as a boring and mediocre winner.

While everyone predicted that it will win with a landslide, the truth is that it won largely as a compromise – other songs won the jury vote (and Arcade not even being second) while few others were more of a televote favorites.

Arcade only got 4 points less from the Jury’s than number two (Sweden) and only 10 points less than the Number one (North Macedonia)…So that’s NOT a big difference at all.. And Duncan became second with the televote, only Norway got more points, so who are the “few” other televote favorites you mentioned? Arcade was the ONLY song who ended up in the top 3 with both Jury’s and Televote…so yes, this was a worthy winner.

OGAE is a very specific audience.

Loreen actually would have been number 1, but british people aren’t so open minded about refugee backrounded people like we are in Sweden

I don’t understand why success in the UK is considered more of an achievement than success in other countries.

I understand the historical and industry-based reasons for it…but I don’t like it. Not all vestiges of empire were unravelled.

That said, the UK has a very crowded music market so Duncan deserves to celebrate breaking through 2 years after Arcade’s release. I hope people listen to his other songs!

That fact proofs us how strong and beautiful “Arcade ” is. I am so proud of “our” Duncan

The second life success of Arcade feels a bit surreal, especially since it goes on for months now. At the moment there are more then a million daily streams on Spotify. And since this week it is certified gold in Sweden. I get the impression Duncan himself is as surprised as most of us.

Last edited 1 year ago by sTommie
17

It was also certified gold in Poland

Wow. And that’s almost 2 years after its release!

That’s great! Congratulations to Duncan! I hope Jamala finds a way to make 1944 TikTok relevant because she’s the only winner of last decade not to have charted in the UK top 100!

Yeah…a song about the deportation of Crimean Tartars is ripe for TikTok memes.

Not everything wants or needs to be TikTok relevant.

But I agree with you Jamala’s fabulous! She’s just not particularly Top40.

As Conchita would say, Duncan is UNSTOPPABLE! 😉