Four weeks ago, Sergey Lazarev took to the dancefloor for the first time on Танцы со звёздами 2021 (Dancing with the Stars Russia). Since then, the two-time Eurovision bronze medallist has continued to show that he has the moves, strutting all the way to Sunday’s grand final. In the end, Sergey emerged victorious and waltzed away with the glitterball trophy.

The Russian version of popular British dancing show Strictly Come Dancing, the format sees stars partner up with professional dancers as they learn the art of ballroom and Latin dancing.

Despite arriving to the contest a week later than everyone else (due to his flight from Indonesia being delayed), Sergey quickly grounded himself as a contender for the trophy alongside his professional partner Ekaterina Osipova. The Eurovision alum finished first on the judge’s scoreboard in all but one of the weeks he competed in the contest.

For the grand final, Sergey and Ekaterina had to perform two dance routines. The first was a fiery samba. Things were made a bit more challenging with the fact that the Russian singer had to perform with another professional dancer in addition to Ekaterina. Sergey rose to the challenge and ensured that he matched their energy – there was an impressive double lift thrown into the routine as well.

The judges responded very positively to the routine and awarded Sergey a perfect score of 40.

Sergey and Ekaterina performed the second routine as a couple. Slowing things down a touch, the pair took on the waltz. While it may be seen as one of the simpler ballroom dances, skill is still needed to make it look completely elegant.

Performing to an operatic tune, Sergey and Ekaterina told a story of love and loss through their routine. It touched many people emotionally, including the judges. They scored the couple 39 points.

Sergey and Ekaterina’s combined score of 79 points placed them first on the judges leaderboard.

The public were then given a chance to vote for their favourite dancing couple. The final result, like each week’s results, was determined by a 50/50 split between the judges and the public.

Sergey received the second highest score from the public vote. However, the couple that received the most votes from the public were ranked third on the judges scoreboard. Thus, that was enough for Sergey to secure the highest overall score and be crowned the winner of Танцы со звёздами 2021.

Below you’ll find a roundup of the dances that Sergey performed during episodes three to six of Танцы со звёздами 2021. You can review our previous article here for the result of his debut performance in week two of the competition.

Scores from the judges for each dance are also included. For this season of Russia’s Dancing with the Stars, the judging panel consists of actor, director and choreographer Egor Druzhinin, TV presenter Darya Zlatopolskaya, choreographer Garik Rudnik and ballet dancer Nikolay Tsiskaridze. Note that Garik was not present for week four of the show, thus the total score is out of a maximum of 30 (rather than the usual 40).

What did you make of Sergey Lazarev’s performances on Russia’s Dancing with the Stars? Sound off in the comments below! 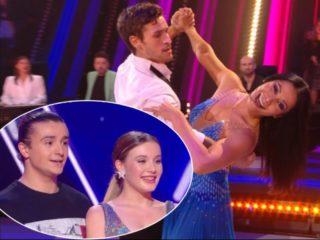 I didn’t know he participated but he’s excellent that’s for sure! I’m glad he managed to win then! <3

Why do we care about this.

The waltz is epic, a classic russian tragedy. If you are familiar with russian novels, you know what I’m talking about.

Odd for us in the UK to see a reality TV competition carrying on as normal at this time. Large live audience, no perspex screens, no social distancing.

Last edited 1 year ago by Fatima
0

I really want, that Zivert should represent Russia in the Eurovision 2021

The continued irony of Russia voting for someone for being light on his feet isn’t lost on me (and I’m sure not him). Congrats to him.

Last edited 1 year ago by AnastasiyA
11

well if your close friend is Kirkorov, you win anything in Russia lol.

Last edited 1 year ago by Anna
5