The grand final of Portugal’s Festival da Canção 2021 is just a few hours away. After two intense semi-finals, broadcaster RTP has prepared a stacked show for this Saturday. Ten acts will perform but only one will win the coveted trophy and represent Portugal at Eurovision 2021.

Ahead of the show, we asked you to vote for your favourite act, and you made your voices heard. After counting a total of 2,748 votes, we can now reveal the result…

NEEV is your favourite to win Festival da Canção 2021

The clear favourite to win it all, from the results of this poll at least, is NEEV. His contemporary, sometimes cinematic, ballad “Dancing In The Stars” received 33.01% of the vote, or 907 votes specifically.

The Wiwi Jury also has the song under its radar. Wiwiblogger Tom writes: “It’s a song that makes you shut up, stop in your tracks and watch for those three minutes. (…) The fragility he conveys makes you believe in what he is singing. It’s a real performance.”

Songstress and established star Carolina Deslandes rounds up the top three. The paired back and classic ballad “Por Um Triz” was able to gather 8.77% of the votes, which is 241 votes. The strong semi-final performance that trended top 10 on YouTube Portugal predicts a bright future for the song.

Pedro Gonçalves came in fourth with the retro-pop inspired “Não Vou Ficar”. He earned 7.68% of the vote (211 votes).

All remaining acts trail behind the top four with less than 7.5% of the vote each.

Festival da Canção utilises a 50/50 voting system. In the grand final, the decision will be split between the public televote and seven regional juries. If there is a tie for first place, the act who scored the most points from the televote will prevail and be crowned the winner.

This year, the grand final will be hosted by Eurovision 2018 host Filomena Cautela as well as Vasco Palmeirim. Meanwhile, Inês Lopes Gonçalves will be the green room host.

The winning act of Festival da Canção 2021 will represent Portugal at Eurovision 2021 in the second half of semi-final 2.

Do you agree with the results? Is NEEV your favourite to win? Will we witness any surprises? Tell us in the comment section below! 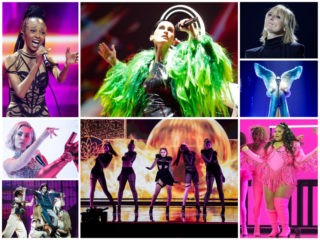 Black Mamba won!
Can’t believe that the public voted them over Carolina Deslandes singing in Portuguese!!

And the 9th in the poll won. Just to tell how bad Portugal’s choice is.

Saudade was my favourite but the staging is a carnival mess.

NEEV won the televoting but old juries gave it low points, once again the public winner does not go to Eurovision.

They really need to change this outdated voting system.

The Black Mamba will not qualify. Portugal is back to last places.

EU.clides, symplicity at its best. Probably won’t win, but Thanks for this little monument of pleasure

Neev, Karetus and Eu.Clides are are the best, my personal favorites. I also like Joana, but i wouldnt be upset if they choose Valeria as it is a perfect fado song which kinda needs to represent Portugal at some point.

I hope Sara Afonso – Contramão wins, she definitely deserves it!

i throw my black hat in the ring. 🙂

I’m really hoping Neev.
In this Esc season, no other song and performance gave me the feeling and warmness of this entry.

Saudade for me. I remember last year the international block came back automatically at 01.00, right in the middle of the results – hopefully that won’t happen again.

Try watching through the RTP1 feed.

Hard choice for Portugal. Neev: best chance of a Top ten finish in Grand Final (very “Arcade” like performance) OR stay faithful to language and tradition and go for Carolina or one of the other native language options. A very hard call to predict the winner.

I think the winner comes from which ever way the jury decide to vote. Carolina has such a big fan base here in Portugal if they all start getting behind her then there is no way she is losing the televote so it depends where the jury place her.

The public will choose Carolina, however, I think the juries will prefer ‘Saudade’. Neev could also come close to winning if the juries change their opinions on the English language representing Portugal. I’ll be happy whoever wins!

Sara Afonso is so mesmerizing i hope ppl give the song the attention it deserves.

My favorite is Eu.clides. Since he has no chance, then Neev. I never saw anyone complaining about the use of English when it comes to other countries. It’s not unique? So? Is every other song from every other country unique? No. So I don’t understand this argument. Portugal sent a unique song in portuguese 2 years ago. We all know how it went and the love shown to it.

I think it’s more of that people can always rely on Portugal, and italy to always send a song in their native language and prevents the contest from being completely English-dominated so they do feel threatened on what Neev represents as an artist who writes and performs his own songs in English.

No english song for Portugal please. Choose Karetus or Euclides, also Caroline would be great.

Neev? Really? Come on, it’s been done a thousand times before. Yawn!

Like the other songs haven’t been done to death. Just cause they aren’t in english doesn’t mean they aren’t overdone, especially here in Portugal.

I really don’t understand the Arcade comparison other than this guy decided to play a piano onstage which is how Netherlands staged the song at Eurovision…if NEEV decided to stand alone at a microphone then it would be a Salvador copycat?…I find Arcade to be a much more modern pop synth and Dancing to be more traditional–if anything it mirrors the vibe of Michael Schulte…I still can’t see NEEV winning in Portugal–Carolina is a household name and the juris would never given an English-language song the edge…even if the juris don’t favor Carolina, I can’t imagine her ranking lower than… Read more »

Given the recency of “Arcade”, it may come across as Portugal trying to replicate what won before and I don’t think Neev would want that haunting him if he wins the selection.

It’s mostly portuguese people that love him. I don’t see many foreigners hyping the guy. Hopefully the jury will cut his chances

It’s such a strong final! I hope that Sara Afonso or Carolina Deslandes win!

For what? Portugal to get a 17th in the semi?

Carolina will probably win, but I think Neev would make a very deserving winner. His performance gave me chills honestly, and he’s Portugal’s best choice of having an impact in Rotterdam.