On Saturday 6 March, Denmark will choose an act to fly the Danish flag at Eurovision 2021. The final of Dansk Melodi Grand Prix 2021 will see eight acts compete, all with hopes of representing Denmark in Rotterdam.

Ahead of the final, we asked our readers to vote for their favourites. The results are in — and it’s a close battle between two acts.

We counted a total of 1,353 votes in our poll. And with just two votes more than their first runner-up, The Cosmic Twins are your favourite to win.

Identical twin brothers Chris and Alec Andreev are also one of the bookmakers’ top picks to win the competition and represent Denmark at Eurovision 2021.

A very close second place goes to Emma Nicoline. Her song “Står lige her” picked up 422 votes — 31.19% of all votes cast. As part of our DMGP 2021 interview series, Emma tells wiwibloggs that her song is about friendship and unconditional support. This track was also a favourite with many members of the Wiwi Jury.

The margin widens significantly thereafter. Rounding out the top three is Fyr & Flamme, whose 1960s-1980s fusion track “Øve os på hinanden” received 157 votes — 11.60% of the total vote. This duo is another one of the bookies’ favourites to take home the DMGP trophy.

The rest of the acts failed to break through into triple figures. Claudia Campagnol, Jean Michel, Nanna Olivia, Chief 1 & Thomas Buttenschøen and Mike Tramp are all further down the list.

All eight artists will perform their songs in the Dansk Melodi Grand Prix 2021 grand final. Chief 1 & Thomas Buttenschøen will open the show and Jean Michel will close. Last year’s champions Ben & Tan will not appear in the final as guests.

The results of DMGP 2021 will be decided entirely by the public – there is no jury. TV viewers will initially vote after all eight acts have performed. Three entries will then make it through to the superfinal. The public will vote once again between these three acts to determine the winner and the artist they want to wave the Danish flag at Eurovision 2021.

What do you think? Will our poll results match the Dansk Melodi Grand Prix results? Let us know in the comments below. 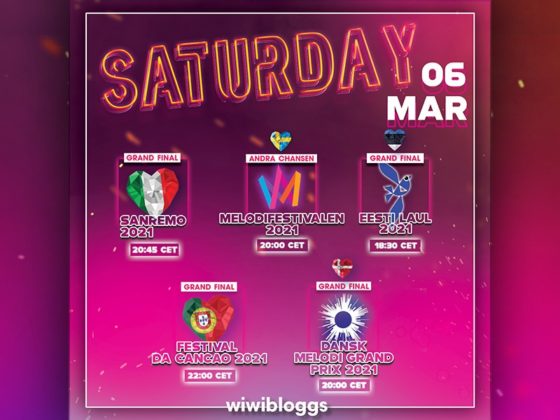 Neither CT or EN to the top 3!!! Denmark is the worst nation for sure in this years Eurovision season. I am now upset!

The cosmic twins or Emma are my personal pics to represent Denmark, but honestly I don’t care who actually wins. I don’t think Denmark will make it to the final this year

Honestly, don’t know what’s going to happen. The bookmakers think it’s between Øve os på hinanden, Silver Bullet and Højt over skyerne. Then, there’s a big gap to Emma Nicoline who is, largely, the fan favourite.

I think this is the final where a big upset is more than possible. I’m really starting to think that an “Abracadabra” or “Beautiful” flukes this.

Indeed, I am 99% sure that will happen. Jean Michel seems like this year’s Lighthouse X. Ironically, a member of Lighthouse X was one of the songwriters of Beautiful.

Fyr og flamme will almost certainly win. They have had 2 huge recent hits in Denmark, and are definately the most well known act in dmgp. I think the bookie’s favorite will prevail here.

I’d be *so happy* if these results would come true tonight. Fingers crossed!

Almost identical order for me as well (just swap 2nd and 3rd places)! And before you say, no it wasn’t me doing the voting over and over again! (I realise a lot of people are down on Denmark this year for some unfathomable reason so probably didn’t bother voting)

“Står lige her” or a probable non-qualification – it’s up to Denmark.

these two are also my favourites.