Every weekday, between now and the contest in May, the team from wiwibloggs will round up the latest titbits from the world of Eurovision 2021. We trawl through Instagram, Twitter and elsewhere so that y’all don’t have to. In today’s Daily Digest, Daði og Gagnamagnið get a beer, speculation builds around Jeangu Macrooy’s staging and Manizha rubs shoulders with Ani Lorak. But first…

Manizha and Eurovision 2008 runner-up Ani Lorak were among the prize winners at this year’s Best Style Awards in Russia. While Ani won Most Stylish Female Singer, Manizha won the prize for Discovery of the Year. Backstage, the two ladies showed support for each other too. Posing alongside Manizha, Alena Zhigalova and Maya Serikova, Ani Lorak wrote on Instagram: “Girls met, chatted and received our awards. We are the power. We are the best!”. (Renske)

Croatia’s Albina recently attended the annual awards ceremony Večernjakova ruža, which was broadcast live from the Croatian National Theatre in Zagreb. While there, she took the opportunity to perform a more sophisticated rendition of her Eurovision 2021 entry “Tick Tock”. Described as a “vintage version”, Albina was accompanied by a series of string instruments and also a jazz band. She sung predominantly in Croatian and looked stunning in a red gown that draped along the floor. We’ve previously shared the performance in an digest some weeks back, but it has since been reuploaded to the official Eurovision channel.  (Jonathan)

The Black Mamba and “Fuego”

We also previously covered The Black Mamba’s cover of “Fuego” during an Instagram takeover on the official Eurovision account. The Portuguese crooners have now extracted the performance from the session, cleaned it up and uploaded it to the Festival da Canção YouTube channel.

Daði og Gagnamagnið get their own beer

Belgium’s Hooverphonic have had a beer brewed in their honour. And now, so have Iceland’s Daði og Gagnamagnið. Writing on Instagram, the group’s frontman says” It has been a dream to make a beer, even dreamier to make it with @borgbrugghus and the dreamiest that it tastes just like I wanted! Also how beautifull is the can? I mean, just look at it! It’s only available in Iceland for now.”

I mean… how beautiful is that! pic.twitter.com/UBbCMKKRIX

Finnish broadcaster Yle has shared pictures of the staging plans for Blind Channel’s Eurovision 2021 performance that were sent to the organisers of this year’s contest. The visuals are set to remain very similar to those from UMK earlier this year, with some minor modifications. Video footage of the band will be shown on the LED wall and floor while Blind Channel give it their all on stage. Yle explained why they decided not to change things too much in the description of the Instagram post:

“The stage proposal largely follows the UMK’s proposal. It’s exceptional that there’s such a well-performing group on stage that you don’t have to hide with any kind of gimmicks. The pictures want to show the drive and energy of the band. No radical changes are promised, because Blind Channel themselves already have that power. And you don’t want to lose it in the show, no-nouuu! The band is at the heart of it all.

The video on the background of the Eurovision show has been somewhat renewed. For that, a few new stories were filmed and the video is rhythmized differently compared to UMK.”

Manizha for the Wiwi Jam at Home

At Eurovision, she’s singing a song about women’s empowerment. And at the Wiwi Jam at Home Concert, she’ll prove it’s an empowering song for *everyone*. Yes, Manizha has RSVP’d! On May 19 the UN Goodwill Ambassador for Refugees will fill our digital stage with her gorgeous voice and her very big heart. We can’t wait to welcome her. (William)

Go_A will also jam with Wiwi

Their song “SHUM” celebrates spring and renewal. And Ukraine’s Go_A will serve LIFE at the Wiwi Jam at Home concert. The group famed for mixing folk and EDM will light up our YouTube concert for the second year in a row, showcasing their incredible musical talents and Kateryna’s unique voice. Get ready to say WOW as they slay SHUM. (William)

Blas Cantó continues his string of TV appearances with a performance of “Voy A Quedarme” on Sálvame (Save Me).

Dutch newspaper, The Telegraaf has published a few articles in the past few days, hinting that Jeangu will use some kind of special animation in his stage show. However, the company that will provide Jeangu’s LEDs tells a regional newspaper that they’ve only been asked to design the animation on the LEDs for Jeangu. They decline to give any further details. (Renske)

The Roop’s Vaidotas becomes a pharaoh

Azerbaijan’s Efendi sang of Cleopatra in 2020 (and name drops her again this year). However, she’s not the only one channelling ancient Egypt. The Roop’s Vaidotas has dressed as a pharaoh as part of a campaign with the Lithuanian National Museum. The “Discoteque” singer explains: “The Lithuanian National Museum invited three young designers to visit the museum’s departments, exposition and exhibition spaces and draw inspiration for their work from the past. After the visit, the young creators presented different clothes inspired by the museum environment. Fashion designer Katrina Knizevičiūtė-Bajoras was looking for inspiration in the newest and most modern department of the Lithuanian National Museum – the House of Stories. The exhibition “What does a sarcophagus hide?”, Which tells about the research of ancient Egyptian mummies in Lithuania, will open its doors here on May 6.”

Ana Soklič had a press day in Slovenia, during which she revealed that she’ll be singing a slightly different version of “Amen” in Rotterdam. She also shared that worries about finding a Eurovision 2021 song “haunted” her throughout last summer. She mostly – if not consciously, then subconsciously – dealt with the question of what kind of song she will present in the Netherlands this year. “That concern stayed with me throughout the year. That this energy shines the way it shone last year,” she admitted. The press conference coincided with the release of an a cappella version of the entry.

What do you think of Ana’s a cappella “Amen”? Are you excited for Jeangu’s staging? Let us know in the comments. 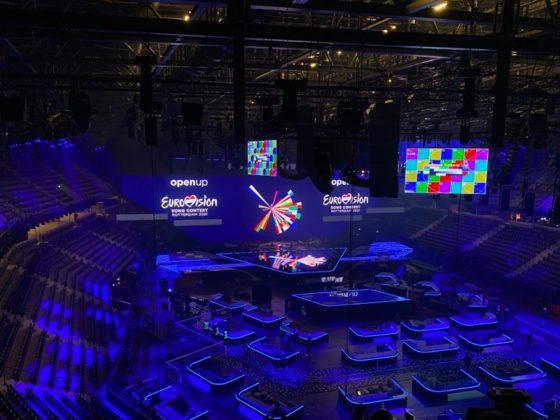 Poll battle results: Eurovision 2020 vs. 2021 — Your favourite entries from all of the returning artists

Vaidotas is a perfect model. I love his posture and his style. So simple, yet elegant.

I really love “Birth of the new age”, but the staging during Jeangu’s live performance on dutch TV was kind of underwhelming. So if he and his team manage to offer a better staging – maybe like the one in the MV? – it would be amazing. And it would probably help highlight a song that is, in my opinion, quite underated.

You guessed it right, she (as well as Loboda) were collectively excommunicated by the Ukrainian public. Not part of the news anymore even though they sometimes try to employ crocodile tears to get their access to the multimillion market back lol

Hopefully Ani Lorak has learned something from Manizha.

3 million Ukrainians work on Russia (including Eurovision stars Ani Lorak, Loboda and many others). Why would they be viewed as traitors by people apart from nationalists?

if they support Putin bloody regime who killing Ukranians every freaking day they are traitors, and Ani Lorak not just working in Russia she choose to live there permanently and willingly performs in propagandist concerts and events on tv

People can work anywhere they want, but there is no excuse to support bloddy dictator

Ukraine is killing it’s own people in Donbass. Thanks Russia not a person has been killed in Crimea in 7 years.

Because that state is killing their compatriots and spreads hateful misinformation about them? Seems like a good enough reason to me.

Honestly, the vintage version of the Croatian song is way better than the original and showcases Albina’s strong voice.

I completely agree, I hated the over-the-top loud noises from the original. The tempo was also too fast for her. I found all of it very annoying. and grating
But this new version with the orchestra really gives her time to actually control her voice, she’s not just screaming the words this time. They’ve allowed her to actually SING instead of belting it out.

in Ukraine she viewed as Russian artist, since she lives and performs there for many years, also she is friends with many Russian artists who supports Putin regime,
though she still comes to Ukraine few times per year to visit sibilings as I know

and yes majority seeing her as a traitor, but it happened 7 years ago and now we just don’t really care what she is doing, she is not part of local showbiz anymore

Last edited 1 year ago by Berta
18

Portugal is so underrated, the guys are amazing and deserve more success.

I like Finland’s staging, it doesn’t need more than what we saw in the national final. But honestly, i can’t see them going higher than 15th in the final.

I hope the Dutch have prepared an interesting staging for Jeanguu! I guess it will be focused on Suriname and roots.

Portugal will shine for sure

I can’t see Finland going lower than 10th if they have the exact same performance as UMK. However ,live vocals will decide if they do make the Top 10 or not.

Juries will matk them down I guess. Top 10 is still possible, but I would bet more on a top 15 place or 16th-17th in the very worst case

Seems like a good staging for Finland, contender for the win amongst others.