As day five of Eurovision 2021 rehearsals draws to a close, just two acts are left to take the stage for their second rehearsals. Last up for today are the penultimate semi-final one contestants from Azerbaijan and Ukraine. What changes will we see from their first run-throughs? Let’s take a look…

Oliver: Despite earlier speculation, the stage show from Team Azerbaijan remains mostly the same. The few minor changes seem to be that the serpent in the golden ball features less frequently, and Efendi’s look is cleaner. Her ponytail is now tightly snatched back and the neckline is slightly dropped, sculpting a much more flattering silhouette. Still, the backdrop is rather garish and Efendi’s vocals and choreography need some sharpening up. Qualification is borderline for the former Eurovision powerhouse.

Padraig: Efendi has made one small but very effective tweak to her outfit — she’s lowered the neckline. This elevates her look massively, giving her back her neck. She’s also straightened her hair so that her ponytail now resembles the style she wore in the music video. Like most of the other acts, Efendi is more comfortable on stage. She’s better able to handle the choreography and she’s less reliant on her backing vocalists. It’s overall a much tidier package than the one we first saw on Sunday.

EBU statement on Ukraine’s second rehearsal: “The lead singer of Ukraine’s band Go_A, Kateryna Pavlenko, reported feeling a little unwell this morning. In accordance with the health and safety protocol she has undergone a PCR test for COVID-19 and, as a precautionary measure, Kateryna will miss this afternoon’s rehearsal and press conference. We wish her good health and will share more information when we have the results of the test. The other members of Go_A have all tested negative for COVID-19 and will perform with a stand-in singer. They will also attend Ukraine’s press conference later as scheduled.

Oliver: The stand-in singer gives the illusion that a lot has changed from Ukraine’s first rehearsal. But in reality, this is exactly the same. Go_A’s first performance was excellent, and this is too. The only thing missing from this run-through is the intense energy of Kateryna Pavlenko, who will surely be back on her feet in time for the semi-final. This rehearsal truly shows how important Kate’s presence is on “SHUM”, even though the stand-in singer did a great job filling in.

Padraig: In Kateryna’s absence, it’s pretty hard to judge this rehearsal. And while her stand-in does an excellent job at stepping into Kateryna’s shoes on such short notice, she hopefully won’t be the one singing in the live show. This is in effect just a technical rehearsal. And since Ukraine were pretty much there last time, there’s nothing much else to report. 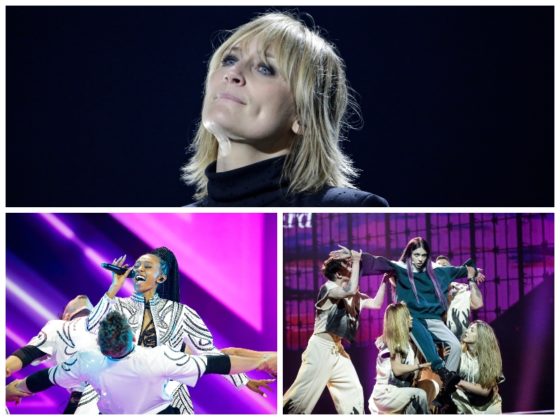 I am happy that she have negative test!
Go_A has one of the best stagings in this Euro.
I really like the folklore component, in this song there really is hope for a better future and the coming of spring. It is beautiful.
Good luck!

To anyone who might care: she’s tested negative :)! Hopefully she’ll be ready to slay as always on Monday and Tuesday.

Azerbaijan’s song ends at 1 minute and afterwards it’s just mata this hari that with some ma-ma-ma in between, it’s just an empty song that lacks.. well pretty much everything.

I don’t understand the hate on Azerbaijani song and performance. They did better before but I think Efendi will qualify.
Ukraine has a good song and such a great performance, maybe top 10 but we all know how unpredictable Eurovision is ?

Is Azerbaijan an Eurovision powerhouse? Didn’t they do well by buying votes?

Turkish diaspora all over western Europe.

Turkish diaspora is not into eurovision since their country has gone. If they supported Azerbaijan , they would have better results and televotings.. As i see Turkish diaspora did not effect Azerbaijan’s televotes because their televotes are too low

Last edited 1 year ago by raylee
0

Azerbaijan: I’m glad Efendi got her neck back! By the way, I’m on the minority that likes her outfit (at least now that they corrected the collar situation). The staging is weirdly unambitious coming from Azerbaijan though.

Ukraine: All my best to Kateryna and Go_A, I hope it was just a scare! We need this performance in the arena, the staging is amazing. And kudos to the stand-in singer, she did a terrific job today.

I hope Kateryna gets well in time for eurovision. The other singer did a really good job tho.

As for Azerbaijan Efendi’s dress ruins the performance for me

OK they finally uploaded the Ukrainian snippet so:

Azerbaijan: for me, this is the least effective ‘bop’ in this semi so far (haven’t seen Malta). Even though I like the ethnic vibes, the performance lacks something and I could see this as a shock NQ
Ukraine: first of all, the stand-in was great! I liked the staging from the beginning and now with camera angles it looks amazing! I’m not the biggest fan of the song, but I do want to see it do well, they deserve it!

Someone really loves wide shots this year. I would like more focus on what’s happening on the stage and faster cutting between the shots during this performance.

What we saw at the rehearsal would make sense if there were thousands of fans bopping under the stage but right now it just takes away the focus from the excellent staging by Go_A.

I need to know. Does somebody have some news about Go_A’s singers’s test results? The waiting is so nerve wrecking.

antigen result is negative, but we are waiting for another one, let’s pray it will be negative as well

Thank you Berta. I hope with all myself it will be the cade. We can’t lose this masterpiece for Covid.

A Rapid antigen test takes 2 minutes to do literally , whereas a PCR takes 2 hrs in the machine itself. You have to process the sample before it and a PCR is run for multiple samples together else it will be very costly . So it takes a lot more time.

Oh no Kateryna! If she’s tested positive then we’ll have to stick with the live-on-tape, which: 1. doesn’t give the same energy 2. Both Australia and Ukraine may struggle, because at least Montaigne was the only one with a live-on-tape

But most importantly I hope she feels better now!

Last edited 1 year ago by Vsl
8

Azerbaijan’s dancers and choreography in general reminds me of Artcvik Fly with me. Even the ponytail.

Irama had to stay in his hotel until everybody got their results, I’m not sure why the rest of Kateryna’s band aren’t doing the same.

Yeah, so did Irama’s. There is usually still a self-isolate time even after that, because sometimes Covid isn’t detectable for ten days. That’s my non-expert understanding.

They probably had a blood test or an antigen one, which are way quicker than the PCR

Why would Kateryna have gotten a different one? She had symptoms, but they were close contacts.

I think the same as Trina in the comment below, they take quick tests very frequently and in case someone is positive or shows symptoms they should confirm it with a PCR which is more accurate

@Jonas – if she does confirm out, Dutch public health will probably do more extensive testing (including confirmatory PCR) on those close contacts. (This is usually not the algorithm (prioritization of resources), but because this is a potentially high impact situation, I suspect they would be more aggressive in close contact management.)

Last edited 1 year ago by Trina
3

They are close contacts of some who felt bad in the morning, that’s not a huge deal. If she tests positive with PCR, I imagine they will be retested with PCR as well.

If the initial rapid test was positive, they would likely have to confirm it out via PCR. There is not a lot of info here, but this is what I’m guessing is going on.

Efendi gave us an iconic music video with Cleopatra but this staging looks rather underwhelming if I have to be honest. I’m not getting the green and pink background visuals at all. Why not use some bright gold and yellow colors with some black and white during the rock parts, this would fit this ethnic song much more.

Because the staging was supposed to be for Cleopatra and that’s entirely obvious. Dub Cleopatra over the staging and it would all probably make sense.
Sorry but Azerbaijan is cheap this year and should NQ for the greater good of music

Why didn’t they swap Ukraine and Malta then ???? Or just start 30 minutes sooner tomorrow ! I’m pretty sure if it was Malta the rehearsal would be rescheduled.

You’re the only one that cares about Malta, honey.

I am so anxious to see what will happen with Ukraine. I really hope that they will be able to perform live during the whole contest. Them and every artist!

It depends whether you do PCR or antigen. Antigen is quick, PCR takes longer but is more reliable. But I guess they have some kind of a preferential access to lab so same-day result should be possible.

All the best to Kateryna!
Hopefully just a precaution.
Go_A are one of my favourites this year

I’ve just heard she is negative

Same! Go_A is art and definitely the best Ukrainian entry since Ruslana

In case Kateryna tests positive , they will use her first rehearsal video as the back-up or the live on tape ?

I suppose this year in emergency they always have the live on tape material that was recorded weeks ago. I really hope we don’t go there this entry deserves to shine on the Eurovision stage

But they also have a live on stage performance from the first rehearsal !!! They should use that I suppose ? Isn’t it better ?