“Oh my god, that’s good”, enthused Nico Santos as he and the rest of The Voice of Germany panel turned their chairs for Eurovision 2015 singer Ann Sophie during the latest round of blind auditions. She blew them all away with her soulful rendition of the jazz classic “Summertime”.

Talking to the coaches afterwards, the “Black Smoke” songstress admitted that it took a lot of courage for her to venture back into the limelight after her nil points defeat in Vienna six years ago.

Ann Sophie on The Voice of Germany | Blind Audition

Watching the blind audition, it’s clear that Ann Sophie has the quartet of music experts in the palm of her hand from the off. Santos and Sarah Connor turn their chairs almost as soon as she begins to sing. And Mark Forster and Johannes Oerding quickly follow suit. The studio audience is also impressed, and Ann Sophie struggles to hold back her emotions as they cheer and applaud. Connor comforts her, saying that it’s perfectly ok to let a few tears roll down.

Before disecting her performance, Forster and Oerding reveal that they remember Ann Sophie from Eurovision. “It took me a lot of courage to come here today,” she responds. She explains that going home with nil points haunted her for a long-time. Now 30, Ann Sophie says that it took years for her to go back into television. She was disappointed in herself and was unsure if she should continue doing music.

Nico assures her that coming to The Voice was “exactly the right move”. Sarah looks on the bright side, telling the singer that the negative experience has helped her as a singer — “You need a few spikes and a few scars in your biography. You can hear that in one voice”. In the end, Ann Sophie opts to join Connor’s team.

Ann Sophie discussed Eurovision a little more away from the judges. “I’ve been thinking for a long time whether I dare to take part. For me, The Voice is the step to show me again and give me a second chance… After [nil points at Eurovision], it’s just a stop. I thought that was it. Who wants to play a musical with a loser?”

Ann Sophie was always the outsider to represent Germany at Eurovision 2015. Going into the Unser Song für Österreich she was the only one of eight acts who had to qualify through the wildcard round. However, through a convoluted process that saw each act perform two potential songs for Eurovision, Ann Sophie found herself in the superfinal with Andreas Kümmert. Despite getting almost 80% of the final vote, Kümmert sensationally withdrew the moment his victory was announced and Ann Sophie became the new winner by default. She went to Eurovision with “Black Smoke”.

However, she wasn’t to sneak victory a second time. Germany finished last with nil points. The blow was perhaps softened slightly by the fact that hosts Austria also failed to pick up any points.

What do you think of Ann Sophie’s audition? Can she win The Voice? Let us know below. 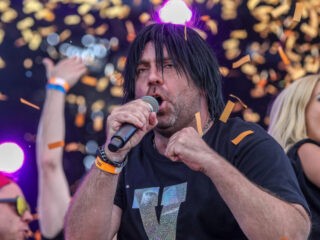 It breaks my heart seeing all these former Eurovision 2015 contestants spilling their soul out on the voice! First Lisa Angell, now Ann Sophie… How I would like to tell these two gorgeous ladies that their poor results back then were not about them and their talent by any means, but rather something seems to having been deeply wrong with the whole results of that year’s contest! So many brilliant songs robbed, and, what’s more serious, talented artists unfairly discouraged. Black Smoke was my mother’s winner and absolutely didn’t deserve the null points. It also reminded me of “Mad About… Read more »

Why is she competing at Voice of Germany, I wonder?

I love “Black Smoke” and Ann Sophie’s voice but at Eurovision she didn’t sing, she shouted the song!

What an outstanding performance! I hope she can come back to Eurovision someday with a song that shows the depth of her voice and puts the focus om her like this one does. I got Amar Pelos Dois vibes just from how much room the song gives her to be creative.

Has anyone read the book “Nul Points” by Tim Moore? He Interviewed a large number of contestants who scored the dreaded 0. Most of them were quite traumatized by the experience. Gunvor from Switzerland who scored Nil in Birmingham was treated disgracefully by the Swiss press. Only Jan Tiegen from Norway seemed to bounce back.

Her surname is Turkish? wow didn’t know it! Anyway, her audition was amazing, she’s a lovely and sweet person that absolutely did not deserve the result in 2015. Great song and voice. Staging could’ve been better but in any case it deserved so much better. It’s sad to hear that it had a negative impact in her confidence and future. By the way i don’t buy the ‘i recognise you from Eurovision’ bit, judges were already told that she took part in ESC with zero pts so they had to mention it and start a chat about it, otherwise it… Read more »

I expected she’s be judge at this point. What’s up with German audience?

The sad thing is she should never have been in Vienna to begin with.

Yes you are right. She came a distant second to an act that was already a favourite. The fairest thing to do in that national final would of been to have another vote. It wasn’t fair to Ann Sophie.

I couldn’t believe the null points for Black Smoke. It was actually in my Top 5 that year. Super underrated. Glad Ann Sophie is bouncing back. She’s got an amazing voice <3

you know very well how to get downvotes all the time 😀

popularity doesnt always mean youre right lol. the MAJOIRTY supported black separation at one point and many other things lol. Ill say what I have to say regardless. Also i dont crave attention maybe like you: its called being secure in your opinion.

Happy for her. I just got addicted to Black Smoke this month and honestly it is an amazing song. It has also aged really well, I could see it placing 15-22 in an actual contest. Totally undeserved last place and 0 points.

As opposed to the “actual contest” that happened in 2015. Like it or not, no one even remembered it. That wouldn’t change today.

Great for her! Black Smoke was probably the most undeserved last place in the past 20 years

Do it for your lover lmao

This goes to show that doing badly is always about the song and never the artists fault! Her voice is splendid and a great addition to this ‚The Voice of Germany‘ Season!

It’s the eurovision SONG contest not the eurovision voice contest. Many great artist do badly with a poor songs and not so good singers ( moldova 2021…. ) do well with good songs. How we the voice does matter a lot, look what happened to roxen. Still in this case it was clearly the song, if she had come with a good one most surely she would’ve been top 15 at least!

In roxens case it definitely wasn’t the song that made her fail but the live performance.

It all comes down to a formula with 3 variables, which are the song itself, the vocals, and the performance (staging). All three need good cohesion for the performance to be good. If one of them is off, the whole product will suffer from it. Take Ireland 2021 for example.

but black smoke wasn’t even that bad??? in no way should she have come last in a year that had electro velvet

at least electro velvet had enough appeal to get a point. the problem with black smoke is it is just vanilla. its okay but just okay doesnt cut it, you need to be peoples winner for them to actually vote… not the song thats like oh its okay but lets see what is interesting

you cant blame anything than a bad entry for the disappointing result. and australia wouldve won in 2016 with the voting the year before. Oh well

Still bitter for her. Both the jury and the audience gave her few points, but the bizarre combined system zeroed out every single point of her.

if we went by the system we have today, she would literally have 29 points. not the best result obviously, but a whole lot more deserved than 0 points was

You know, I wouldn’t be surprised if the reason the jury and televote results started to be presented separately from 2016 onward was because of the double 0 point cumulative in 2015. It’s really bizarre that Germany and Austria got 0 in the end, despite the fact they did get points (okay, Austria got a zero from the televote, but still). As terrible as it was to see the United Kingdom get a double zero from jury and televote in 2021, it was at least a fair zero point score.

I thought it was because the Swedes liked the drama of the split vote. The winner was obvious way to early and the process so long that viewers would drop out early knowing who had won.