The Swedes won Eurovision 1974 with “Waterloo”. The Italians won Eurovision 2021 with “Zitti e buoni”. And now ABBA and Måneskin find themselves competing against each other for Best International Group at the 2022 BRIT Awards.

The five-act shortlist for the group category also features BTS, Silk Sonic and The War on Drugs.

Past winners of the award include U2, Foo Fighters, R.E.M., Fugees, and Kings of Leon.

the nominees for BRITs 2022 International Group of the Year are:@ABBA@BTS_twt@thisismaneskin@silksonic@TheWarOnDrugs

Regardless of how that category goes, Måneskin have a shot of glory elsewhere. They’re also up for International Song of the Year for “I Wanna be Your Slave”.

Fifteen songs have made the shortlist, including Billie Eilish’s “Happier Than Ever” and Olivia Rodrigo’s “good 4 u”.

Måneskin’s song, which explores the many facets of human sexuality, gained widespread international attention following the Wiwi Jam at Home concert, which we published two days before the Eurovision final.

At the time, the band did not have a music video for the number. But the video they shot for the Wiwi Jam soon went viral as users took clips and posted them on TikTok. It’s now been viewed more than 48 million times. You can watch it at the end of this post.

International Song of the Year

ABBA’s BRIT nomination follows the release of Voyage, their first album in forty years. Earlier this year it secured a Grammy nomination for Record of the Year for their song “I Still Have Faith in You”. Shockingly, it is the band’s very first Grammy nod.

Are you happy with the shortlist in these two categories? Do you think that ABBA and Måneskin have a chance at glory? Let us know in the comments box down below. 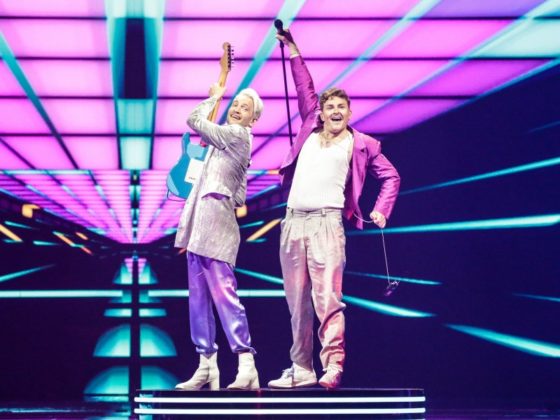 wow this is HUGEEEE. I hope they are invited to perform!

If brits will award them in at least one nomination, that “UK juries gave NO points to Italy in Eurovision” could be forgotten and mistake could be forgiven.

Not random given that Maneskin are perhaps the most successful ESC winner after ABBA. xD

I agree, i totally forgot about Celine Dion. Yes she was also extremely successful

No offence. As great as Måneskin are I doubt people will remember them in 30 years time. They need to have hit after hit in order to stay on top all the time and we aren’t there. I think this is as big as they will get, sadly. I hope I am wrong..

I see them being constantly on tour and multiple events and their fame has already reached America. I think they will have a lasting impact, could be wrong of course but that’s my feeling.

I honestly see them following in footsteps of legendary rock groups like Areosmith and the Rolling stones. They have the talent and the detacation

Sod the Grammys, the BRITs are better at recognizing talent and come across more laid back. It’s awesome Måneskin got TWO nominations although it’s tricky for them to win either but make this another lesson that dispels the myth of how Eurovision kills careers and doesn’t do much for music which numerous snobby British record bosses have spewed for ages along with other crooks across the continent. Since 2009… winners such as Alexander Rybak, Lena, Loreen, Emmelie de Forest, Conchita Wurst, Måns Zelmerlöw, Duncan Laurence & Måneskin achieved international success and improving the credibility and pop cultural impact of Eurovision… Read more »

Well, will Måneskin be remembered in 30 years time? Will they be big next year? You could say they got a fluke after ESC but hasn¨t really had an impact since this past summer. They are still on the verge of being two-hit-wonders. If more singles flop they will soon be forgotten..

Last edited 11 months ago by Denis
-9

That is an impossible question to answer at this point. You’re in a post talking about them being nominated for BRIT Awards, so right there is the British music industry acknowledging they expect Måneskin to stick around. We discuss the apathy the UK industry shows towards Eurovision often so let’s not act like this is the norm. Next year, they’ll be headlining a European tour, playing massive rock festivals like Rock am Ring, Reading and Leeds, Rock in Rio (far from ESC’s expected reach), etc. What happens next is anyone’s guess. But managing even a fraction of the longevity of… Read more »