Semi-final one second rehearsals are done. Now, it’s time to look to the second semi. Finland’s The Rasmus kicked off the first batch of semi two run throughs with “Jezebel”. How did the rockers get on? Let’s find out…

Padraig: It’s currently raining in Turin. And The Rasmus have come prepared. Frontman Lauri dons a large waterproof yellow trench coat, while his bandmates wear big yellow boots. Although given the rest of their rock n’ roll aesthetic, it’s questionable how effective their outfits would be at keeping them dry should they venture outside. We begin with a close-up shot of Lauri holding a yellow balloon. He soon lets go and as it floats away, the camera pans out to reveal that the stage is actually filled with black and yellow balloons. The remainder of the performance is a typical rock show. The band show off their stylish instrument playing techniques, while Lauri tears off his jacket to prance topless around the stage. It’s certainly a captivating opener for the semi. But, despite their decades of experience, some nerves appeared to be present and Lauri’s vocals were not the strongest.

What do you think? How will The Rasmus fair in the semi-final? Share your thoughts in the comments below. 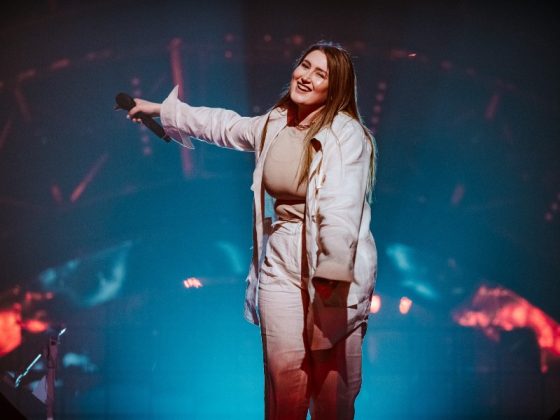 …it’s a no guilty pleasure ! Lovely !

Lauri’s singing is kind of a letdown. With all of his experience, one would expect better. Should still be a rather safe qualifier, though.

Am I the only one hearing “Jezebel, I don’t know how you got in my butt”???

Despite the vocals it still looks professional

Just a thought: Whenever I see balloons on a rock stage, I wonder how long it will be before they get thumped around the audience and popped at irregular intervals.

His vocals were pretty shaky at UMK, so I don’t think we can expect a much stronger vocal performance. That being said, I really like this song. Love the black and yellow – and the balloons. All the best.

All the other countries used backtrack, but why not Finland? It keeps the songs strength as it has vocal parts that need to come from it or the other band members.

Finland and Norway in black and yellow. Now that I’ve seen it, I can’t unsee… good thing they are in different semi finals.

Eurovision.tv has a photo of the Rasmus with the Subwoolfer dancers, it is the exact same yellow color ? https://eurovision.tv/live-blog-thursday-5-may/snippet/dance-classes-have-resumed

Why Finland is 14th in the odds is beyond me. Its a certain nq

Vocals are not Lauri’s strong point…

I didn’t like the staging in the national final. I do like this staging a lot more.
If they can just improve the vocals a little, I think this qualifies easily.

Wow I really love the stage for Finland (mainly cause it covers up you know what!), it looks edgy and cool, I like the the yellow and black theme also. My only issue is the vocals sound quite shakey in the clip, especially at the beginning, maybe he’s trying to save his voice for the final.

This song is sooo generic and bland.

I can’t with this photo, I wanna be this happy too

He looks ready to go play in the rain, jump in some puddles maybe xD

I love this song too, one of my favorites this year

What is this with the baloons? Don’t get it. The UMK final staging was amazing but this is much weaker. Unless they are so confident they will qualify and then do that staging in the final. Fingers crossed! Hyvää Suomi!

I wouldn’t even call some black balloons “staging”. It looks like a emo-kid birthday party circa 2001.

Sadly, he reminds me of it. That clown also loved balloons. Same hair style. Just replaced red with black.