Eurovision 2022 second rehearsals returned from their lunch break with Serbia’s Konstrakta. The handwashing queen performed “In corpore sano” in front of press for the first time. How did she get on? Let’s find out…

Padraig: “In corpore sano” was pretty much a complete package when it won Serbia’s national final, so there were no unexpected surprises during today’s rehearsal. The set-up is the same, with Konstrakta seated centre stage washing her hands. Once again, her choir stand around her, towels at the ready. The Serbian songstress is as captivating as always, with her steely stare sure to hypnotise audiences across Europe and beyond. The song’s message is communicated by some key lyrics appearing on screen in English. Sadly, the stage show seems to have been heavily hampered by the faulty sun. For large parts of the opening third, Konstrakta sits before a screen of black. We see glimpses of beautiful flowers and clapping hands to the side of the stage, but, of course, these are blocked out by the rainbow of death. Luckily, the performance is built completely around Konstrakta so this isn’t enough to derail things, but it’s a shame regardless.

What do you think? How will Konstrakta do in the semi-final? Share your thoughts in the comments below. 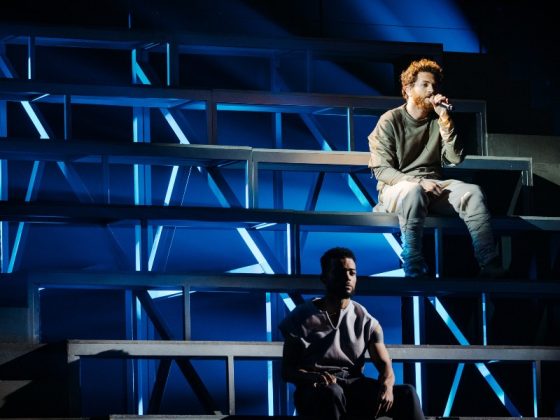 it looks much worse that in the national final. and she is kind of nervous/tense. might be a non qualifier. sad

This short clip looks visually arresting, as I knew it would, but there seems to be portions where the sun is blocking the performance and you can’t see her. At least when the camera pans away. I wouldn’t want to lose the mood lighting but we also lose her a bit.

Nobody said anything about this in the page so I feel obligated to. Hurricane had announced their dissolution to occur in autumn of this year. The girls will go solo after that. On a positive side maybe we will see ksenija or ivana next year in beovizija.

As far as I’m concerned, I liked them better as soloists. Sanja Vucic’s entry in 2016 is one of my favorites from Serbia.

It’s Konstrakta and the rest of the world for SF2, as far as I’m concerned.

I LOVE her. This is pure genious, so fresh and original.
Like someone below, it reminds me of Conan Osiris but I dont think it’s pretentious, it’s arty and iconoclast.
I hope she hypnotizes everyone watching the semi-final next Thursday and get massive amounts of votes. 😀

I’ll sleep if she hypnotizes me…

Sailing into the final

Really starting to like this. It’s daring and different, and she has a fantastic stage presence. Top 10 in the final. Best of luck from Sweden.

She needs to invest in some good moisturising cream. All that washing will dehydrate her skin. So the corpore won’t be that sano!

She looks like she is sacrificing a newborn baby in that washbolw. Poland, Greece and now Serbia. What’s up with all these creepy acts with year?

This reminds me a bit of Conan Osiris from 2019, it’s got that pretentious art student vibe. I can’t see many people voting for this,unless they’re the sort that are taken in by “The Emperor’s New Clothes”.

she is the best ever. i am obsessed with godstrakta and need to see her at the very least reach the top 10. her band zemlja gruva followed me on tiktok the other day and i was so happy <3

I have read somewere that Serbia suport Russia, if thats true, dont wote for Serbia

Oh darling, where have you read that? I assume on twitter?

Please check your facts before you write anything

Serbs always support Russians. Although I don’t agree that is their prerogative. Support for one country or another or one faction over another is very subjective and us dependent in a number of facts and issues. Besides there are many amongst us who hypocritically are denouncing Russia (as they should) but then are mum or worst still support others who have been committing crimes for decades. While Russia has been banned from international events and sanctions have been imposed on it, other countries can continue with their crimes as if nothing is happening and worse still if you dare criticize… Read more »

Jghtl
Reply to  The truth

Many Serbians in fact do support Russia (usually those that are brainwashed), but not a whole country. You can’t speak in the name of the whole nation.

Read the articles. No one country can say that its population supports another country 100%. One can only speak as an average or a majority and the Serbs as a majority support Russia or sympathise with it.

Steven
Reply to  The truth

Yes. Serbia knows best what it means to be hypocritical. A country that was forcibly deprived of part of its territory in 1999, which has its largest Christian monasteries. A country that was confronted with separatism and in which armed separatists kidnapped and killed people, killed police officers from ambushes. The country that did not attack any other country at that time was brutally bombed by the same people who are now worried about Ukraine. That is hypocrisy.

Serbia literally voted to kick out Russia from the UN Commission for Human rights, what are you talking about?

I’m really sorry people; I think this might be flopping. I really like Konstrakta and I hope she qualifies, but this looks like a black hole victim to me.

I wonder if it will be understood by the wider public

I am really sorry, I just don’t get this song and performance. I try but I always stop the video or song at 30 seconds. I just can’t. Good luck Serbia, though!

What are you sorry for? It’s just not your type of a song, and that’s okay

I loooove this woman so much. I love how she is a cheerful aunt during interviews, but then immediately switches to a Disney villain when on stage.

This act is too confusing for the general public, i’m sorry but it will crash and burn in the semi final.

It’s okay to have your own opinion, but you can’t speak for the general public

Who’s gonna vote for this?

I’m going to. Thank you very much.

Obviously i’m talking about the general public who will see this for the first time and who don’t understand the language. I just don’t see people voting for this.

I feel it may be a shocking non qualifier. Shocking = high in the odds. But can’t see how ordinary people (not fans) will pick up their phones to vote for this entry. Nor the juries. Serbia needs to reallign with their values and music tradition, and send masterpieces like they did in the past.

Lol, they can send whatever they want to send

I think you are delusional, let’s meet here after semi and have this conversation again cause you are soooo wrong man. Also, it’s not 2005 anymore, balkan balads are past, so is the swedish europop, we can’t recycle music from 20 years ago anymore. It’s not gonna work in 2022

The same thing was said for Konstrakta in Serbia… She killed the competition that was supported by a huge music industry in Serbia while Konstrakta came from an underground music scene. Everything is possible. And also: this “music tradition” argument is tiring. Konstrakta’s music is Serbian tradition as much as Serbian ethnic music. Serbia cannot be labelled only with one music genre in Eurovision.

Serbia are about to get their best for the past ten years.
This is going to get so much televote support. It’s brilliant.

The song’s been growing on me and given I’ve seen her in interviews, Konstrakta doesn’t seem like the lifeless corpse I first thought she was. Still unsure how first-time viewers will respond but if this does qualify, I wouldn’t mind it.

I just saw rehearsal video, and I am very happy

Now i saw the rehersal clip. Konstrakta is absolutely TOP 3 this year. Staging is great, song is great, the message of song is fantastic. Go girl!!!

This will be the televote winner in this semi-final for sure!

if it is true, i hope either konstrakta or monika liu wins

I am trying so hard, but I just don’t get the hype around this entry.
To me, it seems pretentious and artsy. I understand why some fans might like it, but I am pretty sure it won’t have an impact during the actual Eurovision night. Most viewers don’t listen to the songs beforehand, they won’t bother to look up the lyrics or search for this supposedly sophisticated hidden meaning.

The only certain thing here is the fact even you don’t believe this will NQ although your wrote it.

For me i think it will Q, but not by a great margin, imma be honest, i dont see the hype, but it wiil get a lot of televote support

I don’t get the appeal of it. Could some explain please?

If you don’t get it it’s fine. Song is layered with meanings. Alternative and artistic.

I for example love it.

The truth
Reply to  Jay Trock

Pseudo intellectuals, the artsy fartsy crowd are going gaga over this because it is weird and weirdness for some is automatically art.

Belgrade 2023 seems more and more like a real possibility.

Sounds good to me, fresh plumbs and apples. 🙂

Yep, it’s official, this is my runner-up for the year, behind United Kingdom. This woman oozes sophisticated talent and has the artistic sense of an architect. The staging is epic as expected, you don’t try to fix something that’s already flawless. P-E-R-F-E-C-T-I-O-N! I ŠTA ?EMO SAD? <3

I think that this performance requires all the lyrics to be shown on the screen otherwise the message might not be clear. Key words are somethin I guess but a performance with lyrics for the tv viewers would work here I think. Something like Italy 2018 but with only English lyrics.

Just saw her clip. Stagingwise and artistically it’s amazing. It conveys an artistic feel that weill certainly be appreciated. I still think that lyrics to convey the meaning as well would be a nice addition because the language barrier remains.

They weren’t allowed to use subtitles. They were limited to translating only a few key phrases.

I also read that somewhere, I wasn’t sure if it was true though. Sad that they didn’t let them do it.

This is an example of the damage the rainbow of death has caused, they didn’t allow her to have on air subtitles and now they can’t even have the lyrics in the background because the led screen is covered….did anyone apologize to them?

They didn’t even plan to have lyrics in the background. They will be displaying subtitles at some parts on screen.

No, like subtitles in the movies. At least that’s how I understood it.

If they managed to achieve tight camera shots, well, this is going to TOP 5 then!

She is not just a dark horse, she is one of the favorits for top3!

This is my winner!

I still think this can win.

Because it will. Televote at least.

My name is Konstrakta and I didn’t expect to win.