Strippers, Facebook, Adrenaline…you can always expect the unexpected from San Marino at Eurovision. It’s been confirmed that country that isn’t afraid of sending controversial acts to the competition will stage their national selection Una Voce per San Marino 2023, known as UVPSM. So prepare yourself for yet another marathon of casting rounds from the tiny landlocked country!

After Achille Lauro was chosen to represent San Marino this year in Turin, he missed out on qualifying to the Grand Final. But that doesn’t mean the broadcaster SMRTV is doing away with its intense way of choosing the right act for Eurovision. UVPSM will be back for yet another edition with castings already starting in October. Once again, singers from every country can apply. But there will still be some changes…

In 2022, the final of UVPSM was made up of nine established artists and nine qualifiers who had to go through the casting rounds and semi finals. This will not be the case in 2023. Yes, it’s still possible to see some well-known acts in the show, as SMRTV can give “big artists” the opportunity to skip the casting rounds. But they still need to go through the semi final stage.

You can now mark your calenders, as it has already been confirmed that the Grand final will take place on 25th February. It’s not yet official how many acts will participate at the final but it should be around 20. The show will again take place at Teatro Nuovo in San Marino. It has not been confirmed who will host the shows.

Broadcaster SMRTV is accepting applications until 29th September (and with a fee of 100 euros). Everyone who applies afterwards will need to pay 150 euros. Citizens of San Marino only need to pay 50 euros to apply and attend the casting rounds, which again will take place in San Marino. Since the overall deadline of accepting applications is in late January we can expect to see the last castings around this time. The jury will decide 60 acts for the semi finals.

The last edition of Una Voce per San Marino gave us well-known acts like DJ Burak Yeter who came second and Christina Ramos, winner of Spain’s Got Talent 2016. Achille Lauro ultimately won the competition in Eurovision’s smallest country after he wasn’t able to impress the public and juries at Italy’s San Remo, where he also competed.

Later in May, Achille burned the Turin stage during the semi final of Eurovision 2022. Although he performed on home ground he didn’t make it to the final and placed 14th in his semi final. Not even his rodeo ride and all the burning guitars on stage could push “Stripper” to the final. In 2021, Senhit made history by bringing famous US rapper Flo Rida on stage. Her entry “Adrenalina” made it to the final in Rotterdam.

Who do you want to see representing San Marino in the UK? Will Valentina Monetta take her chance or is it time for a new talent? Let us know in the comments below. 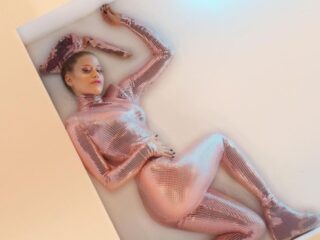 We are from Belgium and we will participate for 2023 in the festival ” UNA VOCE PER SAN MARINO” .In the first place there was said that Belgium would bring back ” Eurosong” what’s a same competition. But finally after 2 months they said Eurosong won’t come back. So as unknown artists you have the choice, you don’t do nothing with the work from last months or you find solutions to do something with it. So we find a solution to participate with another country in this case San Marino. Other countries did it already also so i read there… Read more »

They need to hire a sound engineer in the first place! This year’s show was horribly organized

I’m glad San Marino decided to keep the selection and I hope this upcoming edition is at least on par to this year’s one. Wishing all the best to my favorite microstate! 😀

I won’t lie… I never really understood why San Marino is still competing in Eurovision. Sure, some of their entries are interesting, but… besides Valentina Monetta and Miodio… what other Sammarinese entries have actually had some sort of connection with the microstate itself? I feel like the nation doesn’t really display much of itself by constantly raking in artists from other nations, who more – often than not – don’t do well enough to really stand out. They’ve yet to finish higher than 19th, and that was with a Turkish dentist.

what other Sammarinese entries have actually had some sort of connection with the microstate itself?

Can you reply then also honest what would you do if an artist outside San Marino brings you a result that never was made before ? We will participate as Belgium artist in the hope to give your country a succesful result. We have the goal to reach the final and we need all San Marino’s support. So whoever will participate for San Marino in the Eurovision Song festival, they will have my support , even if i’m from Belgium. 2023 is our chance, and we will do more then we can for a top result for San Marino. We… Read more »

it’s always been that way and it’ll always be that way – the act who has enough funds will represent san marino. it’s a small country with few resources and they use the eurovision as a platform to promote their existence, can’t expect too much lol

nah, they’ll have as many people as possible so that they all pay the participation fee lmao.

Stripper deserved a place in the final!

Couldn’t agree more. Achille Lauro is an Italian rock legend and the whole arena was pissed off that he didn’t bring San Marino in the grand final this year.

I deliberately avoided it in the fun up to the final (along with a few others), didn’t have high expectations but was thrilled with his performance! It brought a bit of grit to proceedings, especially coming after Malta.

I’m too young to remember Gary Glitter as a star, but the performance (and song) made me picture what his performances were like, a lot of chants, building up the audience, dirty guitars etc. But no way am I equating him to that monster! Just separating art from the artist

Not sure comparing him to Gary Glitter is a compliment!!

If you like glam rock, big theatrics, then GG was good at that sort of thing. One of my (older) friends saw him back in the day and says it was a fantastic show. That’s as far as the comparison goes

I am happy to see San Marino in a full swing again, even if I’d prefer a different type of selection. For instance, why not doing what Latvia did in 2018 – Have an online selection of 60 songs, without credited performers or songwriters (but mix newcomers with famous singers, for sure, as that’s the best feature of UVpSM), and let the audiences vote on which songs they like more. After that, with the combination of a professional jury vote, pick the best 20, and have your 2 semis + finals selection. But by then the songs should be in… Read more »

Now here’s the thing. San Marino is infamous for having no restrictions as to where their representative singer is from at the Eurovision Song Contest. This microstate has given us an Eritrean pop singer living in Bologna, a singing Turkish dentist, a Maltese-German duo, an Italian rock legend, and two American singers. That being said, I’ve considered three K-pop stars who have the potential to represent San Marino in Eurovision next year. I love Eurovision, I love K-pop, and when these two topics are combined, I’m hooked. The first is Kim Jaehwan. I have no reason for this, but I… Read more »

Remember that singers from every country can apply for UVPSM 2023 because San Marino has no restrictions as to where their representative singer is from.

They are giving an opportunity for local artists to try out, hence a separate semifinal for them with 4 spots in the grand final allotted to the lucky Sanmarinese finalists.

They have sponsors to help cover the costs of production.

FORZA TITANI! Let’s get this show back on the road!