We’re rounding the bend into September, but Rosa Linn continues to make it a Snap Girl Summer.

Armenia’s Eurovision 2022 act has officially entered the charts in the United States, with her entry hitting #97 on the Billboard Hot 100. That makes “SNAP” the 12th Eurovision song in the history of the contest to crack the Top 100 in the U.S.

The last to do so was Duncan Laurence’s “Arcade,” the 2019 winner. The beautiful pop ballad entered the chart at #100 before ultimately climbing to #30.

Rosa Linn and Duncan Laurence are the only two Eurovision artists since the turn of the century to see their songs make the Top 100.

In fact, six of the 12 Eurovision songs to make the list come from the United Kingdom, which, besides a common language, has always shared a special relationship with the United States when it comes to cultural exchange (and business tie-ups).

Here is the complete list of Eurovision songs to crack the Top 100 in the U.S., as compiled by the passionate Eurofans at Aussievision in Australia.

Three other Eurovision acts from Eurovision 2022 did well on the Billboard Global 200 chart, which looks at global sales and online streaming. But Ukraine’s Kalush Orchestra, the U.K.’s Sam Ryder, and Spain’s Chanel all had their moment in the weeks after the contest. Only Rosa Linn has managed to break into the domestic U.S. chart — even if it’s taken a while.

It’s the latest in a series of wins for the Vanadzor-born talent. She recently became the most-played Eurovision 2022 song on Spotify, eclipsing former leaders Mahmood & Blanco. She’s well past 110 million streams on the platform.

Earlier this month she confirmed that she’d signed with Columbia Records, the label behind Adele, BTS, Harry Styles and Lil Nas X. Since then she’s performed at the at the prestigious RIX FM Festival in Stockholm, alongside names like Darin, Cornelia Jakobs and Omar Rudberg.

Are you loving Rosa Linn’s continued success as much as we are? Let us know down below! 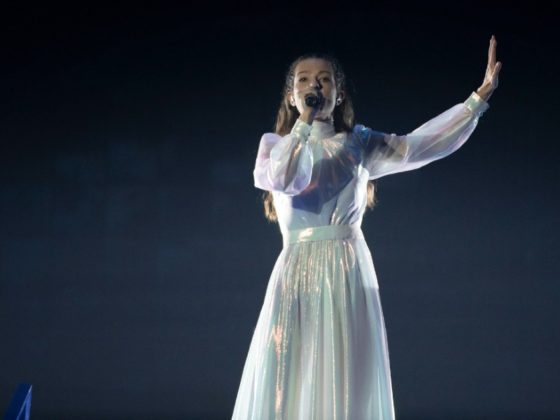 Late for the party here, but not a surprise for me. The Lumineers provided the template for this song and its success. Has she met any of the members of that group yet?

I admit that Rosa Linn has come a lot further than I expected.

This is a song that came in 20th place, and now it’s “snapping” the charts! Bravo!

Good for her! Loved the song on the first listen

Just heard “Snap” being played on my country Indonesia’s radio while in my car yesterday.

It is legitimately the first ESC song ever that I’ve heard being played on an Indonesian radio.

Snap is making history as we speak, and I love it! Congrats to Rosa for making it as far as she’s made it and hope she achieves even more! 😀

Well done, Rosa! Her song has hit #1 in Belgium. She’s top 10 in Austria, Ireland, Netherlands, Norway, Sweden (4th week in the top 10) and Switzerland.
She’s top 25 in far away markets like Indonesia (#19), Singapore (#19), Malaysia (#22). She just hit top 20 in the global billboard chart and has surpassed Italian entry as the most streamed eurovision song.
Her song is charting in 60+ countries…

The fact that she finished #20 in eurovision, shows that something is very very wrong with the contest…

I think it’s just that Snap gets better with every listen, so just once is not enough. Maybe it would help if the juries listened to the songs more during the week, instead of just on the night like the televoters.

Listening to it twice was enough for me, but hey-ho. Using this as a template anything can be made a hit, why not Rockstars?

Very often I like & agree with your comments. But not here. On first listen ‘Snap’ is a nice enough song. Not groundbreaking, not the most exciting, but still pleasant enough to be listened to & to deserve a GF qualification. But it was probably the most formulaic song in the GF. And that becomes clear with every further listen. To me it always reminded me of another song but I never was able to say which.

Nothing is wrong, Tik Tok right now is another contest and another chance for them.

Isn’t one of the factors jurors decide on is the song’s potential for a commercial success? The question then becomes, how could eurovision jurors get it so wrong? The answer is – most jurors were voting for a country rather than a song. So yes, something is wrong.

That’s not one of the criteria but they do award points if the singer has backing from a record company (it makes them credible from the start) and/or if a co-writer is known in the music industry as generally the song is a lot better produced.

Actually that’s not what I was referring to. One of the factors that jurors are ask to vote on is whether as industry experts they believe the song has/will have commercial mainstream success. You’re talking about something very different.

I think most of those 12 entries listed in the article are nowhere near the greatest ESC entries of all time, no matter how commercially successful they were. Glad that she’s making so much out of it tho.

The song is basically in all biggest playlists in Spotify, it’s obvious why it’s being a success even being such a bland boring song.

No it doesn’t. Just because ‘Snap’ is getting all of this success in the charts – good for them! – that doesn’t mean that the song is any good. Most people will listen to anything they are fed.

There were many much better songs this year. Very often there are questionable results at Eurovision, but sometimes the contest gets it very right as well. 20th is exactly what Rosa Linn’s ‘Snap’ deserved to get.

Meds and some coffee could sort you out!

Me too, just as boring as that Switzerland song, argh!

Good for her, but such a pity that Sam Ryder’s single has already plummeted.

I don’t think he’s bothered when he stopped promoting it after 2 days and has been doing festivals in the UK and Europe all summer. He’s releasing a new song on Friday with Sigala and David Guetta so I don’t know why he bothered releasing that song if he can’t be bothered promoting it.

What makes this 10000000x better is the fact that a singer from the tiny unknown little talked about caucasian country of armenia made it to the billboard hot 100 while all the others are basically the big western euro countries. this proves that esc is a big opportunity for new singers to make it globally plus you dont even have to win or be from a western european country to make it. if a singer from a small caucasian country can make it so can any other less talked about country.

Actually when you look at her placement in eurovision, it proves that smaller countries have a far greater disadvantage at eurovision.

I think it proves that a poor placing at ESC isn’t a death sentence for music careers.

No, it just proves that if you can have a way to be put in all the biggest playlists in Spotify you can get that spot easily, it’s not difficult to realize this.

Can’t stop, won’t stop, shouldn’t stop! I am so happy that Snap is doing so well and even representing Eurovision in the worldwide charts and streaming platforms. A song I liked since the first instance and voted for both in the semis and in the final.
(And yes I like it more than every song from the top 3 of this year’s contest).

I’m happy for her, but the song is dumb as rock…

It’s a great song fella. One of the best this year to be honest.

Totally agree. 40 countries ignored her in Eurovision for something. This is just tiktok luck, congrats but NEXT.

Yep, you are toxic.

“The prestigious RIX FM Festival” that Becky Hill (love her) and Sam Ryder were scheduled to perform at but didn’t as they had better offers at UK festivals (rumoured, not confirmed). Rosa Linn wasn’t on the original line-up because she was a nobody.

Great for Rosa Linn, great for Eurovision to make charts anywhere. I hope it encourages other artists and reminds people of the power of the contest.

yeah right the super well known billion dollar us label of nvak founded by an ex esc contestant for unknown armenian talent. seriously noa from israel is signed to atlantic now and if she wins next year no one will hold that against her and blame her success on atlantic but with rosa its all because of nvak ??? and tiktok ??? well that goes for arcade too but no one holds that against duncan.

Her original label did great but of course it’s TikTok. Rosa Linn saw somebody had created the fast version of SNAP and released it. She’s now signed to ‘super well known billion dollar US label’ of Columbia Records that have pushed it further including US radio. Anyone who honestly believes her success has come from her performance on Eurovision is delusional.

How did the TikTok poster first hear the song?

Exactly Jonas. They wouldn’t have heard it without the contest.

You’re wrong! Rosa Linn was promoting it on her channel. The couple said: “I was just scrolling on TikTok and that song came up and he said ‘make one with that song’ so I did. The song was completely chosen at random”.

“I was just scrolling on TikTok and he said ‘make one with that song’ so I did. The song was completely chosen at random”.

I forgot to mention NVAK were promoting her song on TikTok and Instagram as a sponsored post so people would have heard it while scrolling.

…and nobody holds it against Duncan Laurence but his success with “Arcade” 12 months after Eurovision was due to TikTok as an unknown user used the sound for a very popular Harry Potter meme during lockdown. Many young people are now enrepreneurs who build fanbases and can promote their own music on TikTok. There are so many sounds that have gone viral from the platform.

That’s true, but she was sounding on tik tok thanks to Eurovision…

That’s just an assumption. Rosa Linn already had a TikTok channel and used her SNAP sound in every video and NVAK promoted it as a sponsored post.

It is a very beige, radio, spotify track. So no that surprised.

Still, not many thought she could make it as far as she’s made it. But she did and —iirc, she’s the first Armenian act to chart in the BB Hot 100

Columbia Records wouldn’t have signed a young unknown Armenian singer without the success of “Snap” and her record company is American so it’s easy for them to get it exposure on their radio. Dadi Freyr had success with “Think About Things” on TikTok and Spotify in 2020 but the song was self-produced and he didn’t have the funds to take it further and didn’t have the exposure of the contest until 2021.

I’m so happy for Rosa Linn and Armenia, she was so underrated in Eurovision and now she has gotten her revenge. I’m also so happy that I saw Rosa live for two days ago in Stockholm and got the chance to meet her. She is an amazing artist.