In the moments after Liverpool was named Eurovision 2023 host city, locals erupted with joy and gratitude. This was evident most immediately from the live reaction of Claire McColgan, Director of Culture Liverpool, and Eurovision 1993 runner-up Sonia, who were standing by with the BBC.

“It just means everything,” Claire said, having masterminded the city’s bid, which includes a huge cultural programme dedicated to Ukraine. “We’re doing this for Ukraine first of all. We’re doing it for the U.K. We’re doing it for our brilliant city. We just wanted this so much.”

“Better the Devil You Know” singer Sonia is ready to drop the disco balls.

“I’m absolutely over the moon,” she said. “You know what? Scousers know how to party. We’re going to have the biggest party ever!”

Bill Addy, whose company works to improve the Liverpool city centre, says his excitement level is well above 10.

“This is a significant moment for Liverpool — for Liverpool’s visitor economy, for the whole city, just tremendous.”

“Just winning it last night, we saw the ripples of that noise going right around the world coming from Liverpool. To have secured Eurovision in May ’23, is so, so significant for us.”

“We will make Ukraine proud in what we will do for them. We will become a satellite for Ukraine as we deliver one of the greatest Eurovision’s the world has ever seen.”

Claire McColgan, Bid Queen and perhaps the busiest woman in Liverpool of late, spoke to The Guide Liverpool the day after the win.

Standing inside the M&S Bank Arena, you could read the relief and enthusiasm on her face.

“I’m really delighted for our partner city in Odesa, because that’s been an absolute joy over the last couple of months.”

“I’m standing in the arena where this is going to go out to 161 million people around the world from this city in May. And we did it. We did it! Yeah, I’m very pleased.”

“It’s just huge. The three months before will just be amazing….it’s just going to be phenomenal.”

Here she is! ?? Claire MCColgan of @CultureLPool is @MandSBankArena talking about Liverpool’s Eurovision Song Contest win, and what happens next. @Eurovision ?? pic.twitter.com/WaXfwV2W9b

In a BBC interview, she also teased some of Liverpool’s plans, as you can hear below.

Liz Truss, the country’s embattled Prime Minister, sent her well-wishes. She rightly flagged that the show will put Ukrainian culture front and centre.

Huge congratulations to Liverpool for having been selected as the hosts of @bbceurovision 2023. A welcoming city with a proud musical heritage, Liverpool will put on an unforgettable show which celebrates the rich culture and creativity of Ukraine.

The Liverpool Echo, the city’s main newspaper, gave the news front-page billing on its Saturday edition.

The cover shows an aerial view of the city with the Royal Liver Building dominating the scene. One of its two fabled Liver Birds, which are said to watch over the city and the sea, intersects with the Eurovision logo.

According to local legend, if the birds fly the nest, the city would be done for. Thankfully the 18-foot-tall birds don’t show any sign of flapping their wings.

Are you still riding a high about the choice of Liverpool? Let us know down below! And in case you missed our hour-long discussion about the host city on YouTube, you can catch up below. 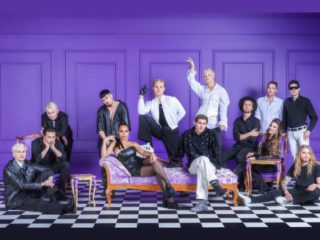 If only they had showed this support for other UK entries… but Sam deserved it 1000%% he’s talented and got great music.

When the UK wins, it should take place in London.Plenty of accommodation options, plenty of options for transport, Eurovillage and arenas. Birmingham has hosted it before, Manchester feels like co-hosting it with Liverpool and Scotland will never support waving UK flags plus they will be independent.

This is the Eurovision Ukraine won and there is no reason to put the British flag in the logo just over the fact that the UK is hosting. It was very clear that whoever hosts the 2023 contest will be hosting on behalf of Ukraine. Everybody knew that, so I don’t get why some people feel that the British flag should be on the logo? Did they win the 2022 contest?

Could it be argued that the host country’s flag has never been used? Making it heart-shaped does not really fit in with your last sentence, and I’m not sure even qualifies as a flag.

What a pedantic, semantic nicompoop you are…..

I’m sorry. Not everybody can be as neurotypical as you’d like them to be. Thank you for your contribution to the conversation.

For me as a proud Brit. I’m very content if it’s entirely the Ukrainian flag on he heart logo. Everyone knows the contest will be in the UK, the word “Liverpool” will be all over everything. But more so, if we are talking about respect, the UK and the bbc willl be respected more for recognising it was in fact Ukraine that won last year. Hosting is an utter privilege for the UK and us Brits and a privilege we should be proud of anyway without the need to stamp our flag on everything. If we keep complaining about this… Read more »

Delighted that Liverpool has been selected. It was increasingly clear that the city was putting their heart and soul into the bid to host Eurovision and had a clear desire to put Ukraine at the heart of the Contest. Very excited to see what plans they put together, especially for interval acts that will demonstrate Liverpool’s musical heritage. Hoping that Timur Miroshnychenko can host in person alongside UK counterparts that represent the country’s diversity.

I understand why you think that, Una, and I’m sure some viewers will wonder why the British flag isn’t in this year’s logo. At the same, I think most viewers will keep an open mind and understand the emphasis being on Ukraine. The entire reason why Ukraine can’t host the Contest in 2023 is because Russia has invaded with the ultimate goal of destroying Ukrainian culture and identity and replacing the Ukrainian flag with a Russian flag. The BBC and, we can assume from the huge support for Ukraine in the UK, the British public, understand this situation and that… Read more »

“Whether people like it or not, the issue of *flag, national identity and sovereignty* still stands.”

That’s precisely one reason why Ukraine’s flag is the heart logo—to show that their ‘flag, national identity and sovereignty’ stands. The UK’s sovereignty is not under threat, unlike Ukraine. While Ukraine is in a fragile position, the UK is not. I think even within your own logic, it make sense for Ukraine to have the heart logo.

All flags are political constructs.

I know what you mean about the host being fairly represented—I just don’t think the heart logo is the most important way to do that or even the right way to do it. I understand that people feel very strongly about these things though.

Hey, no worries—it’s good to be able to talk from different opinions and still get along 🙂

Yeap the purpose of keeping Ukrainian culture alive, the Ukrainian flag is important in this aspect. That’s why they insist on having as many as possible Ukrainian elements within the show but essentially the production will be British and I am sure parts of the shows will be British too (interval acts combined with Ukrainians)

The BBC and British public knew what exactly they were getting into, they got asked to host FOR Ukraine so they are just supplying the location they’ve known this from day 1 of planning they aren’t complaining it’s like having a party at a location it’s not the locations party it’s your party just being hosted elsewhere

You’re acting like BBC and the Brits are surprised? Everyone knows they’re hosting it on behalf of Ukraine but everyone should always remember that the UK came 2nd, that’s why they were asked to host. Also, BBC had the option to reject the offer.

Sad news: Finnish Eurovision representative from 1966 Ann-Christine Nyström who sang the song “Playboy” has passed at the age of 78.

So was Embers – Before Richie & Giovanni

Happy that it’s not always “Toy” or “Think About Things”.

It just annoys me how the contest will apparently be fully Ukrainian, while it takes place in UK and is organised by BBC. It somehow spoils to us how would modern Eurovision look like if they won and hosted. Ukrainian contest, but everything that produces it is by British. At least the heart on the general logo should have been empty. It’s not just Ukrainian show.

Liverpool has a strong Ukrainian connection with its own diaspora community and being a sister city to Odesa. Add that to the city’s own musical heritage, which they wanna highlight as well, you’ll more than likely see a very multifaceted approach to the contest. 🙂

I hope so. I agree that for this occasion Liverpool might be the best choice.

I don’t know why people seem to be so upset by this? I think it’s only normal that you give it a large Ukrainian flavour. It’s their win, not the UK’s. Now how that is going to look and what exactly they will do, we’ll see.

‘apparently be fully Ukrainian’ LOL says who? Hosts will be a mix of Ukrainians and British.

It will be equally split showcasing the Ukrainian culture but also the British one.

I am curious about the postcards, they should be shot in UK and have a Ukrainian touch (Ukrainian refugees in UK cities included??)

I’m happy for Liverpool and for Ukraine but the flag of the UK needs to go in the heart of the Liverpool 2023 logo.

I would prefer a hybrid design of the Union Jack In the blue and yellow colors of Ukraine’s flag, but like in the heart is the least of my concerns.

I think they kept it 50/50 but keeping the Ukrainian flag and then adding Liverpool United Kingdom. I was just hoping they would be more creative…

Love the enthusiasm, now they need to support local talent and have a stage design by someone from UK and ideally Liverpool. I do not wanna see any design of that guy with the plain stage designs who trashtalked publicly the stage designer of 2022 while it wasn’t her fault that the sun didn’t turn on time. We need people with enthusiasm, not bitterness because they didn’t get the job for the 8th time.

Compared to Tel-aviv? Kiev? Malmo definitely not. Compared to the others in the last decade I’d say similar. But does it really matter?

Come on Liverpool lets do this !!!! fantastic news

An excellent choice. They’ve got the right spirit and I’m sure they’ll host it really well!

I totally agree. Liverpudlians speak so enthusiastically and sincerely!