It’s the Liverpool venue that routinely hosts top-flight acts, from Justin Bieber and Little Mix to Paul McCartney and Beyoncé. But this week the M&S Bank Arena has welcomed stars of a different sort — like Brazilian Rebeca Andrade and American Shalise Jones — as part of the World Artistic Gymnastics Championships 2022.

We were flippin’ out when realised that our tickets to the competition, which we bought a year ago, would take us inside the Eurovision 2023 arena, where the song contest will unfold next May.

The 11,000-capacity venue was dressed for sport, not for music. But we still got a sense of the amenities, views and flow of the space, which left us feeling good as we somersault into a new Eurovision season.

It should be obvious from the video above, but the Liverpool Arena is far bigger than the Eurovision 2019 venue in Tel Aviv, but well smaller than the space in Turin.

Of course, Eurovision isn’t about size but feeling. We were seated at the back of the arena on the mezzanine level (so directly in front of the balance beam). The view of the action was spectacular and uninterrupted — no support beams in sight. The size of the arena means it captures energy well — this cauldron was on fire!

We were impressed with the restroom facilities, which were spacious and abundant. The men’s room we visited had more than twenty urinals, meaning you will still catch the tail end of your toilet break song whether you want to or not.

The food offer included the standard array of sweets and Pepsi Max and Pepsi Max Cherry. We got down on some pizza wraps (available with cheese or cheese + pepperoni).

Speaking of pizza, there is a Pizza Express restaurant adjacent to the venue (directly by the massive ferris wheel, which is visible across much of the city). You can also visit the Pullman Hotel and Jurys Inn for a drink or snack, as they are both within a minute walk from the arena entrance.

?? The @MandSBankArena showing us some of the party vibes it can give off during #Eurovision ? #Gymnastics #Liverpool pic.twitter.com/YRrsnCdARG

Countless restaurants and fast-food chains are within a five- to ten-minute walk (depending on how fast you move it, move it).

The nearby Royal Albert Dock has one-off coffee shops like Reuben’s and chains like Rosa’s Thai, as well as food trucks that specialise in ice cream, donuts and burgers. The Tate Liverpool, one of several must-see museums, has a cute cafe too.

Liverpool One — a large open-air shopping mall — has all the usual high-street suspects: Five Guys, Nando’s, Zizzi, Starbucks and more.

Have you visited the M&S Bank Arena before? Did you love the acoustics? Do you think it’s going to be amazing? Let us know down below! 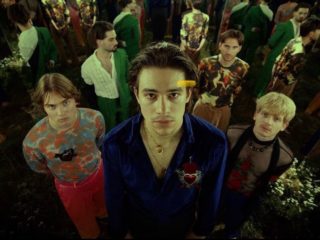 I think it looks great, not too big and not too small. I don’t really see that having a bigger arena would reduce ticket costs, because organizers would also have to spend more to make everything run smoothly. From my own two experiences at Eurovision, which were in Düsseldorf and Rotterdam, I can only say that I way preferred Rotterdam. Düsseldorf had a huge arena, but when you were sitting somewhat away from the stage you could basically not see or hear anything. Some entries (Germany, Ireland, UK) were totally inaudible because the crowd was so loud. Yes, the crowd… Read more »

When I was in Liverpool last year there was an international arms fair at the arena, with demonstrators on the roof. Not that I attended, but I did notice how close it was to other places of interest, in particular the various docks and their attractions. It’s in a brilliant location.

Small arena. I don’t get why Glasgow wasn’t chosen, or even Manchester! Their arenas were bigger and cities could accommodate more people. To those saying why we are obsessed with capacity well did you forget what happened in 2019? Super small venue and as a result ticket prices were the most expensive ever, no cheap tickets at all. then they couldn’t sell out the semifinals and rehearsals so they were giving away tickets which was embarassing. We want bigger arenas so that everyone can attend the shows and a bigger arena offers a variety of ticket prices, from cheap to… Read more »

I think you make a very good point. I honestly believe that the BBC chose Liverpool over Glasgow due to their anti-Scottish bias, (which is well documented).

Glasgow is the obvious choice, with far larger capacity, meaning ticket prices would be more affordable and accessible to fans.

Looks as if we’re in for a repeat of the disaster that Tel Aviv was.

I kinda guarantee you that even if Tel Aviv had a 16,000 seat arena, the ticket prices would still be through the roof because Tel Aviv is just a very very expensive city. Plus, Eurovision is a TV show so the producers can’t plan the whole show only around the needs of the live audience, they have a hundred of other factors to take in consideration.

What is this obsession with capacity? Eurovison can work great in an arena that holds 6.000 people, or even less. It is a TV show and with proper camera production it becomes irrelevant how many people can get it.
Of course, the only problem I see here is the fans and inability for all to get tickets, but otherwise…capacity is pretty irrelevant. Sometimes big arenas seem smaller on TV because of how it was built or how the show is being filmed (torino is a good example and vienna 2015) and sometimes it is the opposite (Copenhagen 2014, Riga 2003)

Does M&S stand for “Marks and Spencer”?

It stands for Marks & Spencer Financial Services plc, trading as M&S Bank, which is a devision of the retailer Marks & Spencer. So in short yes, but it’s another division aside the stores.

If you’re going to compare it to previous venues, the arenas in Copenhagen 2014 and Kyiv 2017 were both 11k in capacity.

2014 was amazing production-wise, despite not a huge arena.

I believe Malmo was close to 11k for the contest and was Tel-Aviv 7.5k??

The 2014 contest had such a big ceiling height, that the capacity didn’t seem to downgrade the experience.

There were approximately 8k spectators in the Kyiv International Exhibition Centre in 2017. It probably has a maximum capacity of 11k for some events, but with the green room, big stage and other necessities there was less space left for the audience. The Tel Aviv Expo can also accommodate a maximum of 10k spectators in some shows, but in 2019 it could only only accommodate 7,500. The capacity is important for fans to have as many available tickets as possible, but where it comes to the contest as a TV show it doesn’t matter much, and actually some of the… Read more »

What a wonderful coincidence that you took an opportunity to check out the venue at a completely different event. I didn’t know you were into gymnastics. That is my favorite sport at the summer Olympics, along with swimming. This is completely off-topic, but Doctor Who is going to be 60 in 2023 so I thought wouldn’t be cool if there was a slight nod to it by having a Doctor Who actor be the spokes person for the British jury, like David Tennant? The chances are very slim I know, but I just thought It would be amusing cause I… Read more »

It was a happy coincidence indeed. I love gymnastics and am so lucky the Worlds have been in London, Glasgow and Liverpool since I’ve been here (and of course the Olympics in 2012). The M&S Bank Arena was very efficient — easy in and out, good location, ample amenities nearby. Looking forward to seeing how they use the space inside during the show!