Ahead of Vidbir 2023, broadcaster Suspilne gave the Ukrainian public the opportunity to vote for who should sit on the national final jury panel. With voting now closed, it’s been revealed that Jamala, Taras Topolia and Julia Sanina earned the most votes and will therefore act as judges for the December show.

More than 500,000 people cast their vote via the Diia app. The public were able to vote from a shortlist of nine candidates, including a mix of former Eurovision contestants, popular musicians and stage directors.

Suspilne announced the results through their Instagram account, along with the percentage of votes that each candidate received:

Antytila’s lead singer, Taras Topolia, is the husband of Eurovision 2010 singer Alyosha. Besides that, his involvement with the contest is quite limited. To Ukrainian Eurovision fans, he is known to have harshly critiqued Go_A’s Eurovision 2020 entry “Solovey”, so it’s likely that folktronica music won’t be his thing. Topolia has been a volunteer in the 130th battalion of the Territorial Defence Forces of the Ukrainian Armed Forces and also co-founded the ANTYTILA charitable foundation.

The Eurovision 2016 winner and four-time Vidbir jury member needs barely any introduction. Jamala‘s critique is always honest and is never partial to her colleagues. On top of that, she enjoys everything from rap to ballads. Over recent months, Jamala has been fundraising for Ukraine through concerts and TV appearances. She was also recently given the Distinguished Artistic Leadership Award by the Atlantic Council.

In 2016, The Hardkiss finished second in Vidbir after loosing a tiebreak with Jamala. However, it still gave the already popular band and its lead singer Julia Sanina another hit with “Helpless”. As a solo singer, Julia has topped the Ukrainian charts and won a YUNA Music Award for a duet with Tina Karol. She has previous judging experience, having served on the jury panel of X Factor Ukraine in 2016.

Ukraine’s Eurovision 2023 national final takes place on 17 December. It will be held inside Kyiv’s Independence Square metro station, which has been used as a bomb shelter throughout the war.

Broadcaster Suspilne recently shared the long list of 36 acts who are still in the running to compete. These long-listed acts are now in an audition process. The list of finalists will be revealed no later than 17 November.

What do you think Jamala, Taras Topolia and Julia Sanina will bring to the Vidbir 2023 jury panel? Are you excited for the show? Share your thoughts in the comments below. 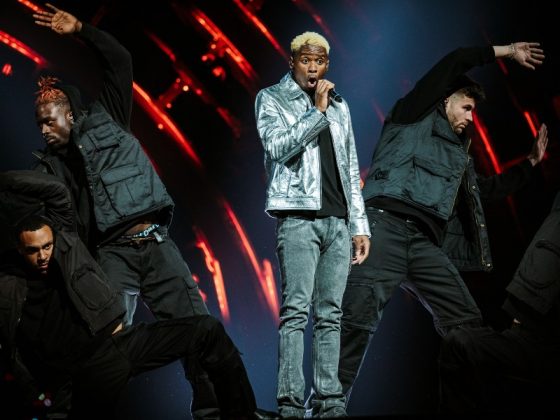 I hope Vidbir won’t be a clusterflop this time but it probably will especially with Jamala being there.

is Jamala having a life/career outside ESC? Oh, wait ….. NO !

Being a mom and a wife.

They’ll screw up something as always lol

Maybe not this time. Have faith!

Is Jamala returning to Ukraine then or will she appear via video-conference?

Ukraine takes Vidbir very seriously and it’s basically being held in a bunker so she’s 99% going to be there, she definitely won’t stay long after through – especially with the Russians threatening her

I was expecting Kate tbh

Not sure why anyone would be shocked Ukraine chose Jamala. She’s popular over there as most Ukrainian and Russian speakers understood the motivation behind her comments in 2019 and have moved on. She’s also spent all her time campaigning and raising awareness for the country when she could easily have lived a very comfortable life away from Ukraine. There were much worse things said in Russian and Ukrainian that night that no-one here understood and she’s really been scapegoated for something she had no hand in doing. It’s now been 4 years and she’s been involved in every selection since… Read more »

I never liked her to begin with. If anything, her jury gig made her more interesting. It’s everything I remember from the 2019 NF season and I didn’t even watch the show. But the memes were glorious. Kinda makes me curious about what those much worse things you’re alluding to were.

The memes were amazing but many of the other contestants were asked very unprofessional and probing questions by the host if he thought the contestant had any links to Russia. One act were asked whether their mother defecting to Russia was enough to make them unfit to represent the country. And if I remember correctly Danylko (or Verka) had some questionable input too.

You usually don’t get that kind of dramatic content in an NF. In shows like Melodifestivalen you know that every syllable is scripted and whether you understand it or not, you just know you’re not missing out on anything funny or questionable. But I guess in Ukraine you miss out on a lot. Someone should make English subtitles for those shows.

Sometimes Eurovision gets things very wrong, but sometimes it gets things very right too. Jamala winning was one of those occasions where the best song & the best singer actually won. I have loved Jamala to bits ever since & I’m glad she is on Vidbir’s jury again.

My problem with her us that she brings politics into eurovision. her song is fine, as it is told in the perspective of normal citizens experiencing a tragedy, but the whole ‘Crimea is Ukraine?’ thing went too far imo.

I am just hoping they will have power/electricity to make Vidbir happen, despite evil Russian aggression.

According to the internet, Daddy Taras is 35. I don’t know. Compared to Freya Skye, I guess he could be considered at a soon-to-be daddy age. Also, he is an actual dad, so there’s that.

Huuuh… Isn’t daddy a way of saying that he’s more of a top than a bottom? In the gay world. And for that matter, the actual age is of no importance. Then, regardless of this. If he is at least 28 years old, he is already old enough to have fathered 1 or 2 or more kids in real life or whatever world he lives in.

Ok. I was asking a question. I never pretended to be aware of things. Or to be more right than anyone else.

A Daddy is just an attractive older Man. Daddies can be bottoms as well….
Typically Men who are referred to as Daddies are over 30.

Shocked that Jamala was chosen, and even more shocked that Go_A’s Kate wasn’t chosen.

In a perfect world, the Ukrainian winner would have been Kate instead of Jamala. And Kalush.

Why would you be shocked that a Eurovision winner was picked? They’re picking a Eurovision song, it makes sense.

It’s only the eurovision echo chamber that hates jamala. Not the ukrainian audience.

Interesting! I didn’t know Ukrainians were still fans after the Maruv incident. It makes sense they are though, Jamala is *very* patriotic.

From my understanding of Ukrainian society she’s not particularly patriotic when compared to her fellow Ukrainians. She also had a much larger stake in the pre-invasion conflict over Crimea as she’s not only from there but also was a victim of the genocide that took place there and is banned from returning for the foreseeable future. I’d say she’s pretty moderate considering her circumstances

Maruv has little to no interest for the general Ukrainian public, Jamala is a universally recognized icon

Plus, Maruv ain’t in Russia now?

She is, she has also been spreading ru conspiracies in the social media and made her accounts unavailable to access from Ukraine. At the same time, she’s shamelessly promoting herself in Europe as a “Ukrainian singer”. She is literally a traitor and a POS human being who doesn’t deserve all those crazy eurofans’ sympathies

To be fair, Jamala’s “uncomfortable question” performance was by far the most interesting thing I ever saw from her. Since it’s only one show, I think I’ll watch the Ukrainian NF for the first time. I only ever saw the memes and scandals so far but the fact is Ukraine is the most relevant country in recent Eurovision history, whether you like it or not. Ruslana is still the best Ukrainian winner though. By far.

Happy for Julia! Although I would still prefer The Hardkiss to represent Ukraine themselves 😀

I’m excited to see the acts and their songs and I’m still hoping for a Tayanna, Khayat, Laud, and Kadnay return. 🙂

Oh yes Khayat! If it could be true, I love him so much!