Belgium finally has its act for Eurovision 2023 in Liverpool. And as the dust of a nail-biting national final settles, Eurosong champion Gustaph has opened up about his winning track “Because of You”.

Gustaph outlined his planned for bringing “Because of You” to the Liverpool Arena stage, as he plans to add “finesse” to the performance.

The Belgian superstar also said his song is a love letter to chosen families and queer communities.

We caught up with the talked to the newly-crowned winner shortly after his victory in Belgium.

Gustaph “Because of You” interview — Belgium Eurovision 2023

During the performance, he was joined by two of his best friends on backing vocals, while his husband designed the stage backdrop and visuals. He described performing with his chosen family was an honour, and he was grateful to deliver this song’s message.

He added: “I’m sure we are gonna do some finesse here and there, but this is the blueprint for me. This is something I really want to focus on and keep going forward with when I go to Liverpool.”

Additionally, Gustaph said he’s exciting to take the track around Europe on the promotional circuit. He said: “I love touring, so bring it on”. Amsterdam, London, Tel Aviv — Gustaph could be with you very soon.

“This is very exciting to me because a lot of my friends will actually be at these parties, which is incredible to me.”

What are your thoughts about Belgium’s entry for Eurovision 2023? Tell us in the comments below. 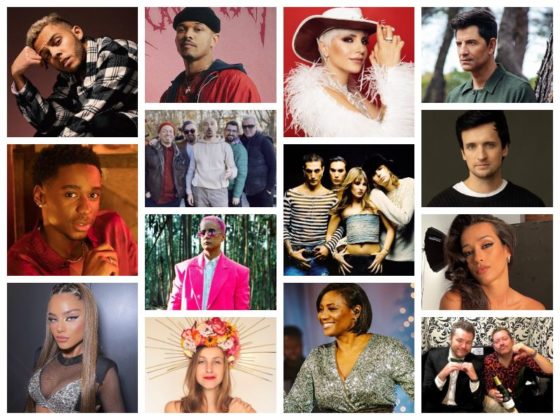 We could not even vote because of the stupid voting system (error all the time). Feel like this is all corrupt. This song is just horrible

I’d love to see Gustaph and the backing vocalists on the smaller floating stage, to create a more intimate and club-like vibe, almost like go-go dancers. I think that this could surprise a lot of people in May if staged well and would be a great opener to a semi-final.

A crap song from a gay guy … that’s about the size of it!

chérine was sooo much better

I think I’m in minority, but I think this song is amazing! Good luck

I feel like alot of criticism came from people who didn’t watch the show. He was amazing. Didn’t expect to win but that’s solely because nobody liked it before the show.

Not gonna lie. It’s growing on me. The song was dead last for me before the night of the finale, but the performance made something happen. With good staging he can definitely reach the top 20. However, I’ll never get over the fact that we won’t get to see Chérine with Ça M’ennuie Pas at Eurovision.. that was a possible top 5 song. It’s one of my favorite songs to ever come out of a Belgian Eurovision selection. Now I can only think “what if…”

The worst Belgian entry since 2014…

I can’t reminder I ever participated but thank you!

ngl, the song is obnoxious at best, I can’t hnadle another moment of the song. [i did not follow the selection, so it comes from an outsider listener and not from a but*hurted fan].

He’ll be the fan favourite after slaying every pre-party
good luck Gustaph!

I’m happy to see nice comments after all the hate on Saturday night. I enjoy this song even if it’s not what we would call “quaoity”. It just makes me smile 🙂 The spirit of the song is so nice and it is so true when he says that RuPaul Drag Race inspired him, I really feel it.

I tried twice but 1 min of it it’s enough for me. It is probable that at some point before May I will enjoy it. But it is quite unlikely it’ll be high in mg top. Musically it doesn’t say anything to me… 🙁

I couldn’t make it through either. It was so disjointed and had no ‘flow’ from one line to the next, one section to the next.

There is a enough there that it could be improved with the revamp, but as it is now, I can’t see it making out of the semis.

I really like this song. It made me dance the first time I heard it. Here is a very good example when a banger can be of great quality!

I was pretty indifferent about other contestants, so I am not mad. In fact, I am happy about that choice. I was surprised that he won, but I must admit that his performance was the only one that made me feel something. I thought something like “wow, that was nice”. Great voice, good energy and most importantly he seems really honest. The song might be cliche and the lyrics are simple, but you can feel that they really mean a lot to him. It does not seem like a random song that was written by a stranger and just handed… Read more »

I have this on repeat, sooo good! We need more uptempo songs on ESC after last year’s snooze final full of ballads and midtempo.

I love this song. I’ve probably listened to it close to a dozen times since it won. Go Gustaph! Go Belgium!

Underestimate this at your peril. Pure joy. Queer in the best sense of the word. Team Banger™ will wet themselves. LOVE HIM!

This is the type of queer representation I love to see at Eurovision!

An entire production created by his chosen queer family, a feel-good song and a decent dance track, what’s not to love? I really hope he dives into the ballroom vibe and has some people voguing on stage in Liverpool. I’m also so excited to see his outfit, I’m praying it’s as camp as possible with tearaway sleeves and an even bigger hat.

The guy is just so lovable and I’m really rooting for him to qualify. I might even vote for him if the staging is killer. Don’t f**k it up, Gustaph!

Nice guy, the song is “okay”, and his voice is good! But he really must ditch that ridiculous costume if he is aiming for success at Eurovision. The way he looks now is an absolute no-go if he wants to be taken seriously by the mainstream European public.

Conform, you mean? That’s the opposite of the message of this song.

I don’t think a Vanbeirendonck outfit is a ‘poor man’s choice’ …..

I’m old enough to remember when people called Boy George’s outfits ridiculous. He stuck with his style and it paid off.

Or put it plainly, have someone style him that would register well on TV.

A twin-set and pearls from Marks and Spencer, Liverpool might be more suitable. And perhaps a pussy bow that the dancer could rip off halfway through.

He’s a lovely guy. I hope he wears a better outfit for Eurovision.

I bet the guy has every fashion designer in Belgium currently in his DM’s to design his look for Eurovision.

Good luck guy and the most important thing have a nice Eurovision journey, focus on the love you get, ignore the trolls and do what you think is good for you.

I think this could surprise people tbh. If Belgium could qualify with Miss You, I’m sure it’s gonna be possible with Because Of You

Dont even compare 2022 with this pls. Gustaph is nice person but song is let down pour moi – he should take The Nail to UK instead of this song