He needed 278 points to conquer Eurosong 2023. And 12 of those points came from Dutch social media queen and Eurovision 2021 host Nikkie de Jager. In an exclusive interview, the woman behind NikkieTutorials told Wiwibloggs that Gustaph earned her top points.

It was a tight race last weekend in Brussels’ Palais 12 and one man emerged on top. Gustaph is set to represent Belgium in Liverpool with his queer anthem “Because of You”.

In a catch up after the show, our Renske managed to talk to Eurosong 2023 jury member Nikkie de Jager, who provided live feedback to the acts. Singing the praises of Gustaph during the show, the make up artist told us:

“I won’t say that my twelve points made him win. But maybe… Because I gave him twelve points and there was a one-point difference!”

Nikkie loved the outspoken queer elements in Gustaph’s entry and performance, which included voguing and a drag queen doing Flemish sign language in the visuals. To Wiwibloggs, she said:

“It’s a queer celebration. And like I said: I want more, more more! The song is a 100, but I feel like in order to really slay at Eurovision, people need to remember you. So I want him to do something in his act. Maybe a hat, blow a hat… pull off the sleeves. The act needs a little bit more love and then it’s a homerun for me.”

The former Eurovision host said that when VRT called on her to be part of the jury, she made it clear that she cannot sing.

“They said: ‘No, you don’t have to focus on singing, we want you to focus on what you feel’.”

And what she felt about Gustaph turned out to be: “He’s a winner, baby!”.

Do you agree with Nikkie de Jager? Did you like her Eurosong 2023 commentary? Would you like to see her back in a next edition? Let us know in the comments down below! 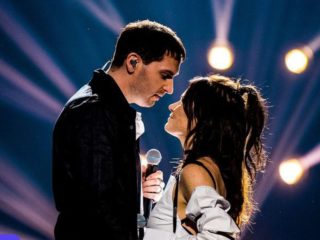 Her votes had nothing to do with the quality of music, I’m afraid. Gustaph seems like a nice person, but no one should win for reasons unrelated to music.

Maybe the lyrics hit home with her.

If she was a part of a PROFESSIONAL jury, then she did a very bad job! They way one amateur, televoter votes is exactly what she had described, and that’s how it should be when it comes to us, televoters. However, as a professional juror, she must focus on different things (quality of composition, arrangement quality, production, lyrical level, performance on the stage…), so simple “feeling” and being “biased” should not be allowed for a professional juror. At the end, why calling them A PROFESSIONAL JURY if they don’t vote as professional but rather as all of us, televoters?

Honestly, how about we stop making this whole contest about LGBT anymore. It’s given Eurovision a pretty bad wrap already

No. LGBT people aren’t going anywhere. You can stop watching it, though.

the way you completely missed the point and still thought you ate ? take a break

People have all kinds of reasons to vote for songs, and why they feel as they do about a certain song. So I’m perfectly fine with what she’s saying. I’ll just say he wouldn’t have been my pick for Belgium.

I first assumed she’s being biased because the singer is queer and the song is very much appropriate to it being queer. That is what I’m seeing from other sources. But when I read here that she explained it further anyway like wanting to see Gustaph slay and be remembered, then that’s where I though she’s making a valid point. You know, seeing the growth of the singer. Though the criteria that these juries are doing felt like something we see in The Voice or Idol, that just seems unexpected to me but I cannot do anything more about it… Read more »

While I do agree that it is a music show and only music should matter, not only is she entitled to her own opinion, but y’all want a free televote meanwhile she can’t have her own reasons to vote for a song… ok. make it make sense luv. It’s funny to me, cause music & quality only matter to the eurovision fandom community when it’s convenient. Y’all claim that this is tacky, trashy, low quality (sure, it wasn’t the best of the night, but y’all like much worse stuff let’s be honest)… so we just forgot how all of you… Read more »

Absolutely entitled to her opinion. If I was a jury member though and I was picking the act that I felt had the most potential to do well and really make an impact, I would’ve picked Gala. The imagery/staging was very effective, gripping and looked professional and as she alluded to, it certainly felt that it was conveying a message. The song itself also stood out so yeah if I was going for the most potential, I would’ve picked that. Additionally, I think despite not having the best staging, Chérine could’ve been a good option because her vocal is very… Read more »

Good point but at the same I personally don’t like when jurors vote for what they think has more potential or may do better (which nobody can really know 100%) instead of what they think it’s the best based on own criteria/taste in an honest way.

I think generally the difference (btw completely understand what you mean) is that televoters for the most part rely on their reactions to songs, emotions, entertainment value from songs which is why we typically see mid and up tempo songs do well in the televote, along with entries that stand out due to unique styling or staging. The jury on the other hand, whilst they do take those things into consideration, I do think they also focus on the execution, the professionalism, the vocal delivery and the quality of an entry itself in relation to instrumentation, originality, mass appeal and… Read more »

So much gay-bashing here.

There’s literally no gay bashing in these comments. And as a queer person I have no problem saying that this act is absolute trash

Big Daddy Karsten was that. This is not. It’s really just a fairly usual love song, that implies people need a “significant other” to find happiness.

queer representation is always welcome, but this is type of tacky and stereotyped representation does no good to anyone, neither to the community nor to the brand of eurovision.

As a queer mixed raced person, I mean just giving someone your top points because they’re queer (and not because of the quality of the song and show) kinda just ruins the whole experience. Like in all honesty, I think Eurovision is one of the most queer friendly and representative programs in the world and I get what she is saying, but its also a bit of like…if you’re a judge, you’re supposed to be unbiased. That said, I don’t think we need any more hat or sleeve elements like she was suggesting. It was already a lot.

I’ve got to be completely honest and admit I’m rooting against all the weak/mediocre entries that blocked much better ones from making it to the contest, hoping both Gustaph and TVORCHI flop badly in Liverpool. There are national selections that don’t even have one interesting option in the entire lineup so we can’t afford to let the good ones go to waste like that.

Seriously…..Rooting against does it mean to be toxic towards the acts YOU judge weak and mediocre? If it is it’s so childish to not be able to accept a simple choice just because you don’t like it, are you the good taste police? But you don’t like it, ignore it it’s simple. Gustaph is a nice addition to the future esc line up. We will get 37 songs you will have the choice to find songs you like so no need to denigrate those you don’t like saying they don’t deserve to go in the contest and wishing them to… Read more »

And after y’all dare to say that Tom Dice is a sore loser lol but you are even worse. Look at you!

Yes, I’m not very proud of it but you gotta appreciate the honesty at least? It’s not just a taste thing, I think most people would agree that Gala Gardot and Krut are just so much better than the entries we actually got, the consensus is that it would have been much better for the contest to have those two in the lineup, and I just wish for what’s best for the contest. Nothing personal at all, I just feel bad when talented people put time and effort into a clearly superior product and they don’t get rewarded for it,… Read more »

The consensus? The difference between what should have been and the actual result? ……Who decide of that? The consensus comes from a small group of persons not even representative at all. The consensus is only in some eurofans brains because of some useless polls and biased youtube reactions. This eurofandom has no power, no influence AT ALL , I know it could be frustrating but it’s like that so now no need to turn this frustration into toxicity towards artists who asked for nothing but to share their music. You don’t like their music it’s ok don’t listen to it,… Read more »

I respect your honesty for sure! And I respect the countries choices and their artists too!

Ps: They are all talented and all worked hard to produce their songs and their performances, you find some of them superior ok it’s normal but it’s totally subjective and somebody can feel the total opposite of you.

Ok I get it the contest should be done entirely with songs that YOU like and that YOU chose. Interesting self-centrism…

I am a proud gay manbut with alldue respect you send a song because its godd not because it has quuer elements!
This exact mindset is the reason we had the joke decade of the 00’s.

U must be kidding me

LOL what a perfect scapegoat.

I kinda disagree. You need choreographers, stage directors and people like that as well otherwise you might as well go with opera singers only. However you need to do some background check on people you’re inviting to make sure you don’t end up with this mess. Gala Dragot was there and they went with this Boy George wannabe?

He’s a much better singer than Boy George.

Tbh I don’t really know his music, I was talking about the styling.

Yes, but she is a make-up artist, non of the above

I never said she was a good choice, just that music-adjacent people should be involved as well, not just regular music professionals.

Does being a Eurofan count?

The public had just as much power and they aren’t music professionals either.

Why did I think of J.Lo after reading your comment