Ukrainian singer Alekseev generated a lot of buzz on Tuesday evening with the release of “Forever” — his entry for Belarus’ Eurovision 2018 national selection.

But by Wednesday afternoon Eurovision fans were questioning whether his entry violates the September 1 rule, which says songs may not have been commercially released prior to that date.

ESCWORLDCLUB — a Eurovision community with more than 50,000 subscribers — obtained and published a video of Alekseev performing the song on May 23, 2017 in the city of Stavropol. Further videos are available here and here.

They report that he premiered the song a few days earlier inside Kyiv’s ‘Oktyabrsky Palace’ as part of “Drunken Sun” — his nationwide tour — and even issued a press release about the debut.

The song — a dark ballad, in which Alekseev professes his love for the person who makes his life complete — sees Alekseev tell his beloved: “It’s our happiest story and there’s no one around/We will go for it and I know you’ll be mine, forever”.

“Forever” is an English version of Alekseev’s recent single “Navsegda” — which also means ‘forever’. The original is 3:45 long, but the Eurovision edit has been thoughtfully done and it doesn’t feel like anything is missing.

And while this new version premiered last night, the official rules of the national selection — in line with those of ESC — say that songs may not have been performed prior to September 1.

“A song (music and / or text) can participate in the Project, as long as it was not commercially released or performed publicly before September 1, 2017,” the rules say. Songs may not have been “distributed over the Internet, as well as on any media (audio cassettes, CDs , mini-disks and the like) by means of sale or otherwise transmitted to a radio or television broadcast. The maximum duration of a song is three minutes. ”

BTRC officials, who are conducting live auditions in Minsk on January 11, will now have to decide whether the song can proceed, and, at some point soon, they’ll also want to have a word with the EBU to confirm.

There is precedent for similar dramas.

In 2016 a petition circulated calling on the EBU to disqualify Jamala and “1944” after grainy video footage emerged showing her performing the song in May 2015.

“The purpose of the rule is to prevent wide distribution of any song that might give it an unfair advantage in the competition the following May,” the EBU wrote in response.

“In the past, songs that had been publicly available before the deadline, but had not been accessible by a wide audience, had been granted permission to compete in the Eurovision Song Contest by the Reference Group.”

“In the case of Jamala’s ‘1944’ the EBU’s attention has been drawn, after the 2016 Eurovision Song Contest, to a public performance of an earlier version of the song in May 2015.”

“The video of a small concert had only been viewed by a few hundred people before it was discovered in the past few days.”

“The EBU, based on previous decisions in the Reference Group, therefore has concluded that the published video did not give Jamala’s song any unfair advantage in the 2016 Eurovision Song Contest and the song was eligible to compete.”

EBU: Jamala’s May 2015 performance of “1944” does not breach Eurovision rules

In 2016 Danish broadcaster DR allowed Anja Nissen‘s song “Never Alone” to remain in Dansk Melodi Grand Prix, after earlier suggestions that it may be ineligible due to a previous live performance by co-writer Emmelie De Forest dating back to 2014.

DR consulted with the European Broadcasting Union, who confirmed that there would be no problem with the song competing at Eurovision if it were to win the Danish national final.

Many will argue that Alekseev’s current song is different from the earlier version — it’s shorter, features new cuts, is sung in a different language and has a different title.

What do you think? Should Alekseev be allowed to compete? Let us know down below!

READ ALL OF OUR ALEKSEEV EUROVISION NEWS 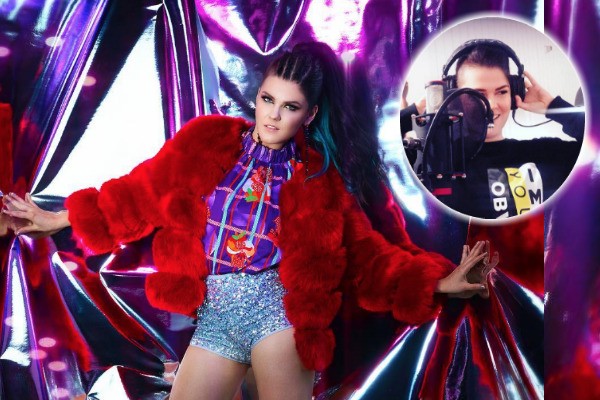 He plagiarised the song from Gali Atari – Ksamim. He ripped it off almost entirely, except the last line in the chorus. I am sorry to say this because it was in my top 10, and he looks very charming, the song is captivating, but a rip-off is a rip-off still.
Don’t hate me now for stating this, I liked the song very much because of the melody which is simply captivating and so eastern that it plucks some bigold nostalgic strings in me, and ofc his persona. But it has to be said. This is plagiarised.

Let him perform. It’s a good song. He’s singing it in English and it’s been reworked.

It’s a bit of a shame, I’d like to have seen “Forever” on the ESC stage but it’s true, the song was published before Sept. 1.

Jamala and Blanche were not disqualified. Double standards?

no this is why he made a english version, when requiem was performed before the 1st of September they made a new version with english lyrics. Seriously did you guys forget about that?

Making Requiem bilingual doesn’t change the fact that it is still the same song from when it first came out.

As we can hear, he’s singing a russian version, while he submited english version, so actually he’s not breaking the rule and No rule breaking=No disqualification.

I really love the idea that Alekseev is competing for ESC. He’s brilliant, but as much as I like Forever, I feel like he could have come up with something much much better. It almost feels like his submission to compete for Eurovision was last minute as evident by the sub-par English version of the song.

lol the competition hasn’t even started and this guy already riddled with all sorts of issues.

Did he gain an advantage over his competitors by giving the early performances? If yes, disqualify him.
If no, let him sing.
Alternative: He could be allowed to change the song.

What you said is true but in reality, unless a song is so bad that everyone agrees not to vote for it, Belarus will most likely receive votes from Russia and Ukraine anyway.

They should ask him to submit a completely different song instead. Forever is atrocious!

It’s more than common for Russian-speaking artists to “test” possible hit songs on their tours, according to the audience’s response. Also, the song that was performed live was “Navsegda”, the original Russian version of “Forever” which was released commercially on November 9, 2017. Before that, only concert-goers heard this song, in its original version, not the one the Belarussian people will hear in the selection. Chill out and let the man compete because his debut album is GREAT and he has a lot of potential to win hearts all over Europe.

It’s unfair. Russian media still remembers how Jamala broke the rule. Now this will cause another heated round of speculations and insecurity among the other participants. Just ban him and that’s it.

“1944” did not break any rule. The song was never commercially available and a few hundred views on an online video where the song was performed do not equate to widespread distribution.

Linda Zervakis and Elton are the Unser Song hosts! Wiwibloggs, keep up!!

Pavel Callta from Czech selection also performed his song Never Forget on concert (several of them in fact) before September 1 2017. He was allowed to participate since he performed the song in Czech back then to not that big audience.
I think he should be fine.

Ofc NO! Nikita is the best! #TeamAlekseev

Let the boy compete. The song is brilliant!

The videos of the performance were released after 1 September, so that isn’t an issue. The issue that BTRC and the EBU will have to consider is does the performances in May give Alekseev’s song an unfair advantage?

In Anja’s case, it was deemed that the audience at Emmelie’s concert wasn’t big enough for the performance of “Never Alone” to have had an impact (#shade). But did a big pop star like Alekseev command a much larger audience at his May gigs? Is such an audience likely to be Russian Eurovision voters?

EBU allow 2 times to song performed in Eurovision , who was performed on stage before EBU deadline. First time with Jamala 1944 (and allowed 2 nd time political song from Ukraine , first time allowed when Ukraine was host 2004) and after that with France song Requiem from 2017. and Belarus because almost same reason must change song in 2011 and I think because this is song in belarus national final, EBU wili say to BTRC do disqualifed this song . EBU said to Russia if girls from T.A.T.U from Russia 2003 kiss on stage Russia wili be disqualified… Read more »

They’re homophobic…so they gotta deal with it!! The progressive world doesn’t have a problem in letting live even if they don’t accept.

What are you progressing towards?