On October 4th, the very sweet Roberto Bellarosa premiered his new single “Suivre Mon Étoile”. If you’ve heard the song, you’ll know that it’s pretty good. But if you haven’t, why don’t you listen to “Get Lucky” by Daft Punk first?

We’ve heard “Get Lucky” so many times, we recognise it from miles away. Now let’s listen to Bertie Bellarosa’s new offering and see if you can hear the resemblance.

There are obvious differences between the two songs like the fact they’re sung in different languages. But at the same time, it’s glaringly obvious that Roberto got the inspiration for his new single by the famous French duo.

The introductions to both of the songs are almost identical, and the catchy riff keeps on reappearing throughout both songs. Which means whenever you listen to “Suivre Mon Étoile”, you can’t help but think “Get Lucky”. All that’s missing are some sparkly jackets and helmets! Even Roberto’s voice could be mistaken for Pharrel’s.

What do you think? Am I the only one that can’t help but sing “Like the legend of the phoenix…” instead of the actual French lyrics that I don’t understand? 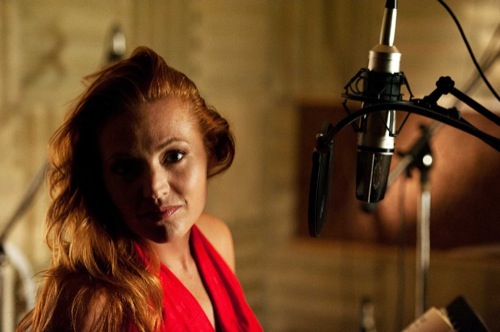 PHOTOS: Valentina Werks It on the Set of “L’Amore Verra”

The first my thought when I’ve heard the beginning of Bellarosa’s song was: “Oh, sounds like “get lucky!” But I have to say that belgian song is made quite well not to sue it’s author 🙂 still it is pleasant to listen to.

They sound simillar, but tbh, I liked Roberto’s song more… It’d be better if he sung this in ESC…

I don’t think the songs sound alike at all.
Just because the song starts with some electronic guitar, doesn’t mean that he ripped off from Daft Punk.
Also, he does not sing like Pharrel at all

“The uploader has not made this video available in your country.” :/

Just the very similar backing track. The sung parts have nothing to do with it. This is actually quite good.