Recently the Wiwi Jury — our in-house panel of music unprofessionals — travelled to Norway to see the beautiful fjords and eat some delicious fårikål . Eventually we sat down to review the songs competing in Norway’s Melodi Grand Prix. First up are the Stage Dolls with “Into the Fire”. Does this 33-year-old band remain fresh and current or are they totally dated? Here’s what we think…

Stage Dolls with “Into the Fire”

“Into the Fire” reviews:

William: To answer the question above — they are totally dated. This reminds me of my senior year of high school, which was many, many moons, ago. The only difference is that the songs back then sounded more current than this. It’s a disaster. Even the thumbnail to their video looks old school. The chorus itself is pleasant enough, but the verses and the lyrics leave me cringing. I’m pressing mute.

Zakaria: This song reminds me a lot of the British band Busted. “Into the Fire” is a good throwback to the pop/rock golden era but I’m a little worried though as some might feel this song would have been more appropriate 10 or 15 years ago. I don’t think this song will fare well but I still like it and I’m happy it’s there. 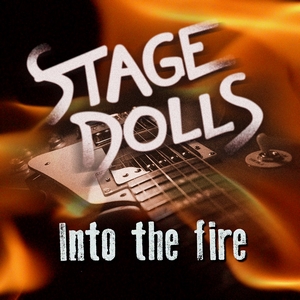 Deban: Derivative pop-rock! “Into the Fire” jumps into my line of fire. Nothing about this sounds contemporary. In an era when Eurovision should be setting trends, national selections should be a showcase for emerging talent, and fresh ideas. Stage Dolls may have marched their way into the American Billboard charts in the ’80s, but that formula needs to be modernised in order to make an impact in Europe now.

Robyn: Stage Dolls have been around since the ’80s, though they’ve calmed down somewhat since their glam rock heyday. “Into the Fire” is more a standard rock song, reminiscing on youth, like a less melancholic “Rock ‘n’ Roll Kids”. But even the slick modern production can’t disguise the very dated sound at the heart of this song. Josh: “Into The Fire” sounds like a song that belongs on a $9.99 compilation CD of Australian pub songs. When I saw the band name “Stage Dolls” I got really excited because it sounded glitzy and glamourous and it’s neither of those things. Snore.

Chris: The perfect dad rock song, which unfortunately for Stage Dolls is completely the wrong genre right now for Eurovision. The band is deceptively popular though (their last album went straight to number one in Norway) and against some of their competition, they might actually have quite a bit of a backing with some voters. I can’t see them winning, but it’ll be three minutes that I won’t complain about when they’re on stage.

Luis: This made me yawn. I find it so difficult to connect with this song: yes, they are three grown men talking about their adventures as youngsters, and in a way it feels like when your grandparents tell you the story of their life. “Into the Fire” might contain some good rock elements, but the whole package sounds as if it was taken from the old times they are recollecting.

Liam: I thought a song with a captivating name like “Into the Fire” would be a little more interesting. It’s a cute little throwback to the age of ’80s rock but this is 2016, and that style means nothing.

Antranig: This song has a lot of good elements but the rest of the song does not live up to the first 20 seconds or so. I was expecting very little from it so I was pleasantly surprised that it wasn’t completely terrible but it is nevertheless one of my least favourite songs in Norway. It’s too repetitive and I just can’t connect with this one.

Sami: I really feel like that if you would listen just to the instrumental version of the song, you wouldn’t know the band has actually been around since ’80s. But it’s his husky voice, where you can really hear the experience. I like how it’s easy to sing along wity and I also like the lyrics. However, it’s still bit bland and won’t stand out even in the Melodi Grand Prix. @Steven: You’re not the only one. I have them for 3rd as well, behind Laila Samuels and Agnete. The rest didn’t impress me as much as these 3 entries.

Probably in my top 3 in Norway, shocked myself

Did Bulgaria not select their singer yet?