A handful of betting agencies — BoyleSports, PaddyPower, Betfair and 32Red, have released their first set of odds for who will win Semi-Final 2 of Eurovision 2016.

At the moment it’s neck-and-neck between Ukraine’s Jamala and Australia’s Dami Im, with both of their odds hovering around 2/1. At the moment half the agencies give the lead to the “1944” singer, while the other half side with the “Sound of Silence” siren. It is most definitely close at the top!

The bookies seem rather confident that one of these two acts will win the semi. After them the odds widen significantly. BoyleSports, for instance, has Latvia, Serbia, Bulgaria and Poland in the next tier, and in that order, with odds between 6/1 and 9/1.

Both BoyleSports and PaddyPower believe that Switzerland’s Rykka and Belarus’ IVAN are the least likely to win this semi-final.

Semi-final 2 betting odds: Who will win? PLACE YOUR BET ON BETFAIR NOW

Those are, of course, the odds to win Semi-Final 2. The bookies run a separate table for who will actually qualify.

At the moment PaddyPower believe the following 10 acts are the most likely to make it through: Serbia, Australia, Ukraine, Latvia, Bulgaria, Poland, Lithuania, Belgium, Norway and Albania.

They think Denmark, Romania, Israel, Macedonia, Ireland, Switzerland, Belarus, Georgia and Slovenia are likely to miss out on the final. The bookies’ odds shouldn’t be taken as doctrine. According to PaddyPower, Norway is only a borderline qualifier on par with Albania. That strikes us as a little strange. They also suggest that Romania — a country that has never failed to make the final — will struggle to get through.

Do you agree with the bookies Top 10 acts to qualify? Who do you think is the most underrated and overrated? Let us know in the comments box below! Wiwi Jury: Bulgaria’s Poli Genova with “If Love Was a Crime”

Both song is bad. I dont like politics song. Not in ESC. And Australia, she omly sing ” sounds of silence” over and over again. Boring

@Julian
Exactly. Years have gone by when this could have been dealt with after WWI.

@Pollaski
Don’t use sources that contradict your argument. Perhaps you should read the article before you post

I want 18 of the 19 songs to qualify 🙁
My crystal ball tells me the countries that are certain to go through to the final are Serbia, Australia, Ukraine, Latvia, Bulgaria, Belgium & Norway. The bookIes are also saying Poland, Lithuania and Albania but I am not so sure.
My crystal ball agrees that Romania, Israel, FYR Macedonia, Switzerland, Belarus, Georgia and Slovenia will not go through but it is not so sure Denmark & Ireland will fail.

I like song Dami but i dont like voice and song Jamala sorry for me Jamala its boring not my favorite @PP Romania out you know ?

The names “Macedonia” and “Macedonians” have been already used in what is today “former Yugoslav Republic of Macedonia” for too long to be repelled. It is true that “FYROM” has almost nothing to do with the ancient Kingdom of Macedonia. But since what appears that the Romans extended the use of term Macedonia to cover a larger area can’t see any solution to the name dispute that would not describe the new country as “Macedonia” and its inhabitants as “Macedonians”, as improper as it may be.

All of them would probably be like “Wow, why are you so stupid?”, considering all the countries lie mostly (if not entirely) out of the geographical region brought up.

Macedonia… is entirely within the region of Macedonia, which also includes parts of Bulgaria, Albania, Kosovo, and Serbia. 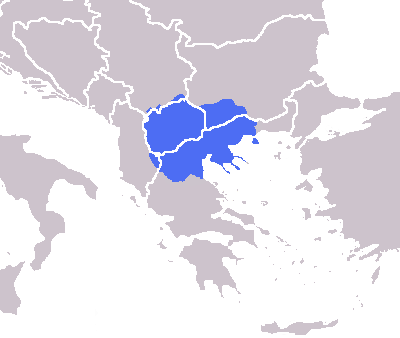 Israel out of the final? God please, don’t make it happen. I will be very sad if Hovi won’t make it!

It’s difficult to say who will qualify. Sometimes acts struggle to get through just because of lack of support, even if they’re technically one of the 10 best performances, unless they really manage to stand out and overcome that hurdle. Off the top of my head, Israel and Bulgaria are two countries with a history of struggling to qualify out of the semis, for example. I think both of those songs deserve to go through, but you never know.

And Bookies are actually right: Jamala and Dami have the 2 best songs in the 2nd semi final. And the rest? Only Israel matters to me. The other ones I really couldn’t care less

@Pollaski: Indeed, i agree with you in principal. I was just using Boaty Mcboatface as an example of absurdity – being a bit of my own devil’s advocate there. 🙂
Boaty Mcboatface is supposed to be the UK’s Royal Research Vessel – a bit more public and official than a private citizen’s first car, I would think.
I’m willing to peacefully accept it though. (Although watch as the government won’t stand for it – on goes the story…) x

*Still hopes that Macedonia will qualify and participate in ESC 2017

Australia is so over-rated. I can’t stand this song

And WHAT is wrong with Boaty McBoatface?!

I named my first car (1990 Subaru Legacy- that thing was a TANK) “Curiosity”, just on the offhand chance I ever hit a cat. I never did.

Two typos there: Changing* and Sometimes*

I feel i should point out that the Czech Republic has recently seriously considered chaging its mame to Czechia. There’s nothing stopping other countries doing the same thing. (On the other hand, has anyone heard of Boaty Mcboatface? Sometines re-naming things can go wrong…)

Well, my preferred qualifiers in the second semi final are (in random order): Australia, Latvia, Ukraine, Bulgaria, Poland, Serbia, Norway, Ireland, Lithuania and Switzerland. But in reality I think Switzerland will be replaced by some other country. Seeing lots of people disliking the song recently, therefore can’t see who will actually vote for “Last of our kind”.

I definitely don’t want Australia to win this semi. Has to be the most overrated entry this year (along with Spain).
Anyway, my qualifiers (in random order) would be: Latvia Poland Israel Bulgaria Switzerland Belgium Norway Albania Lithuania Serbia
Yes, you read that right, I prefer Albania over Australia.

I know this ain’t EUrovision (although I bet if he entered he’d have won BIG TIME), but Prince was found dead in his home today. 57 years old.

@Pollaski
You may be right but this no undo my previous views….

You alright there, son? Coming off a bit incoherent here…

Alright, lets took at Wikipedia and see what all the fuss is about.

Yeah, okay, that is one of the most hilariously dumb reasons for a dispute ever. Given that this is a competition between COUNTRIES, nobody’s going to have a confusion between the Greek region of Macedonia and the nation of Macedonia. So take a deep breath, there’s far more important things in the world to worry about.

I think that the qualifiers of this Semi-Final are gonna be: Australia, Ukraine, Latvia, Serbia, Lithuania, Albania, Poland, Bulgaria, Norway and Israel. The rest are likely to fail. Israel will be helped by the juries. Albania and Poland have each great diaspora, so the televote is going to support them even if they don’t like their song. The juries are also going to support them, because both Eneda and Michal are great performers, just like Hovi. Belgium is gonna be a qualifier with the televote (Because of running order), but I think that the juries will place them in the… Read more »

I prefer Australia over Ukraine

@Pollaski
You are not funny here everyone knows in who Macedonia refer to….to FYROM people tha propagand everyone and say that a greek city is not belong to Greece….this is different….

Its absolutely adorable that someone thinks regional names are copyrighted.

I bet if you had your way, we’d have to call them something like the CGCOA (Current Georgian City of Athens)

@David Who
no i dont mean that…I mean tha Ireland is not London or Birmingham and UK is not Dublin…..

@Österrike
its not nationalist is the truth and here we have infringement of the european and not only rules….

Well in that case the UK should be properly referred to as the “United Kingdom of Great Britain and Northern Ireland.”
😀 haha

Please,correct the article!Its FYROM not Macedonia….EBU name is FYROM and you have to follow these rules….also the recognised name for this country is FYROM…..Macedonia is belong to Greece!

Also, what sissy odds are these? 13 acts less than even odds to qualify?

YOU HAVE NO MARBLES!

Pollaski’s qualifiers, which are indisputable.

If Jamala drops an octave, cuts out the hysteria, and becomes reasonably coherent, replace Ukraine with Romania.

Ukraine and Australia I agree but that Latvia entry how it’s lifted up there I will never understand! !!!!! It’s not song it’s shouting it’s painful are we suppose to enjoy that! Lol

Pretty sure that both Denmark and Romania will qualify and Australia is overhyped.

Tempted to bet on Norway and Belgium to qualify!

Barei talks about how badly Hovi was treated at Moscow airport because he’s gay. She has nothing against Sergey but does not want Russia to win and doesn’t like the song. If you’re interested read more here

Here are the qualifiers. If you disagree, you are wrong.
Australia
Ireland
Norway
Lithuania
Latvia
Ukraine
Serbia
Belgium
Switzerland
Denmark

Aggre but I think that Rykka will contradict them…

I hope Romania Denmark and Macedonia will qualify. ITS BETTER THAN IRELAND ALBANIA AND BELGIUM.

It’s unbelievable how Switzerland is underrated this year.
a few months ago everybody was so happy with ‘the last of our kind’ and now all the enthusiasm is gone like it’s never been. I’m not expecting very high place, but last? for me It’s not forgotten song.

Israel and FYROM should qualify….
Bulgaria is higher and Lithuania is out…

Romania,Israel,Australia,Bulgaria,Belgium,Albania,Poland,Serbia,Ireland,Ukraine definite qualifyers….It depends how they will do at rehersals and in semifinal live.