Hei, Eesti! Estonia’s Eurovision hopes might have stumbled this year with Jüri Pootsmann, but the Baltic country’s music scene is thriving as ever. Some of our favourite Estonian Eurovision alumni have been busy releasing new music over the past couple of months, so we thought it was only right to shine the spotlight on them. Here are some of the releases you might have missed.

With an opening that’s a bit more Carly Rae Jepsen than Epic Sax Guy, “Kustuta tuled” actually came out back in January (our bad!) as part of the Eurovision 2014 singer’s new album. It’s hard to call this is a standout track. The tempo seems lacking and the beat never really gets going. The voice effect over the bridge doesn’t quite work either. Maybe there’s something about saxophones in Tanja tracks that just doesn’t get us going…

It seems gratuitous to say that Birgit Õigemeel sounds great on a track, but it really is worth remembering just how good a vocalist the Eurovision 2013 finalist is. “Me tean, et sa tead” doesn’t give her the power notes that “Et uus saaks alguse” did, but it still showcases her voice well. Taking away from the voice though, the song is almost too twee. Look at the video: there’s the lovely picnic, Birgit on a swing, a whole lot of camera filters and folk instruments to boot. There’s a moment you want to say “enough is enough”, but Birgit does just enough to charm you back on side.

But what’s better than a duet between former Eurovision stars? Tanja and Birgit worked together before, but “Valge saatan” (White Devil) is their first official studio collaboration. Lyrically, the song refers to two women realising they’ve been cheated on by the same man. Instead of fighting, though, the women come together to enjoy a night out. The song – also from Tanja’s album – appeared online in April, but it actually has more of a summer club feel. Our Estonian divas sound great together and it’s particularly nice to hear Birgit with a more uptempo number than what we’re used to.

Oh yes, Getter. The Eurovision 2011 star’s latest, “Kullaväljade tuul”, is a pretty good track and one that makes you hope for a killer bridge. Thankfully, it really is and the final chorus just drives it home. In fact, this is a song that’s really carried by its chorus. Throwaway verses are probably the only issue you can levy against this track though. We have a feeling that “Kullaväljade tuul” is one that we’ll be listening to for a while to come.

Stig Rästa — one half of Estonia’s 2015 duo — is back with his band Traffic and their new single, “Natukene veel”. It’s the band’s first release in a year, and Stig was certainly heavily involved in this one. He wrote both lyrics and music for the track, as well as directing and editing the video! Speaking of which, we think he definitely saw something in Conchita, although Ms. Wurst pulls off the bearded lady look a little bit better than the Traffic boys. The song is very true to the group’s style and while it’s not going to be for everyone, the chorus is certainly very catchy.

Which is your favourite of these new releases? Let us know in the comments section below, or tell us via Twitter! We’ll be doing another roundup of more new releases from Estonian Eurovision artists soon, so check back for more. La la listen: Cyprus’ Ivi Adamou tells it as it is on “Akou Sopa” 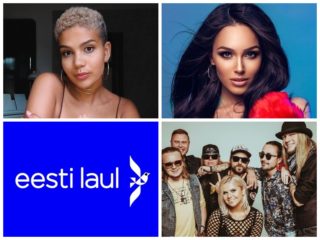 I never got the hype about “Calm After The Storm”. It’s SO boring! It must be the most overrated Eurovision song ever. I mean, before the contest almost everyone was talking about how boring it is and suddenly after the rehearsals everyone started loving it! Did anyone pay you off, guys? LOL!
While “Rise Like A Phoenix” is a masterpiece for me and I think it deserved to win.

No offence, but you really managed to find the worst songs (Traffic’s “Natukene Veel” is okay, Getter’s is also decent I guess) ????
Some of the songs you should’ve included:
Ott Lepland “Sinine Safiir”
Getter Jaani, Grete Paia & Uku Suviste “Teemant”
Laura “94/95” (I mean, even though Laura hasn’t represented Estonia as a solo artist, it’s a nice song)
Also, Stig is now a producer of a brand new Estonian band called BEYOND BEYOND, their stuff is pretty amazing. (Could be the future Eesti Laul contestants?)

….And, before anyone protests…. 😉 What I mean about “Conchita being the most undeserved winner ever” in ESC, is not necessary that she had the worst song. Even if I think the song itself was not at all good. It’s more about the very unfortunate fact that some people seemed to vote more on the “character”, than the actual song. It’s a music contest, not a “personality” contest. And why is it so impressing with a man, dressed like a woman with a beard on stage? Not much I think. It all just added fuel to silly ESC-stereotypes. And when… Read more »

As for the Conchita thingy – I think it’s a parody, if at all influenced by her. About time with a parody btw. Most undeserved winner in ESC ever I think.

Birgit had a very cliched ballad back in 2013. Stig / Traffic though – great music1

I don’t understand lyrics, but i adore how estonian sounds, it’s beautiful language.