Hungary’s national selection A Dal moved onto the semi-final stage tonight, with four acts qualifying for the grand final. Joci Pápai, Gina Kaniza, Gigi Radics, and Soulwave will be heading to the grand final next Saturday.

Tonight’s first three qualifiers were determined by a combination of televote and an expert jury made up of Hungarian music industry pros Caramel, Zséda, Károly Frenreisz and Miklós Both.

This vote was won by Joci Pápai with “Origo” and Gina Kanizsa with “Fall Like Rain”, both on 45 points. Gina scored top marks with the jury, earning the maximum of 10 points from each juror. Joci was a bigger hit with the public, getting seven points in the televote, compared to only five for Gina. Gigi Radics took third place with 42 points for her song “See It Through”.

The fourth qualifier was selected by a second round of public voting. The public didn’t quite agree with the results of the first round — the fourth spot went to Soulwave who had placed fifth in the first round with 37 points. Soulwave and their song “Kalandor” were also saved by the public in their heat — but this time the jury was on their side and gave a higher score than previously.

Amongst the eliminated acts is boyband Spoon 21. Their song “Deák” received a lower jury score this time and put them on 37, tied with Chase, Dávid Henderson and Soulwave. In the end it was fellow boyband Soulwave who were able to muster more support to win the public lifeline.

What the Wiwi Jury thought

After the first performances in the heats, the Wiwi Jury — our in-house panel of music unprofessionals — reviewed the qualifying songs. Here’s what we thought of tonight’s finalists:

“Songs like “Origo” are what Eurovision should be about: showcasing your country by fusing its traditional sounds with something unexpected and modern. I have no idea what is being sung, but I don’t care because it is so interesting and different from all of the other generic songs being served up by most national selections. Me likey.” – Jason

” I’m pretty sure my sister wore that dress to her prom in 1997. The dated wardrobe reflects the song, which seeks to channel Whitney Houston, but ultimately comes off as very karaoke. This isn’t down to Gigi — her voice soars. It’s that the production, the melody and the shape are so “we’ve heard it all before”. My score is a five — and every point is down to Gigi, not the lacklustre tune.” – William

“This is closer to a YouTube copyright-free background video than a Eurovision entry. They are called Soulwave, but I can hardly feel a breeze, and very little soul. The song itself is not bad at all, but it’s a) not memorable and b) too plain. You’ve already heard in 30 seconds what they offer in three minutes.” – Luis

“The more I listen to this song, the more I dislike it. I never thought I’d hear a Hersi’s “One Night’s Anger”-cum-Broadway number, but lo and behold, A Dal delivers. Gina’s vocals aren’t suited particularly to this song, with the final note being a particular struggle.” – Chris

What do you think? Is the A Dal winner among these four qualifiers? Share your thoughts below! Benjamin Ingrosso: “I wrote all my emotions into my Melodifestivalen 2017 song” 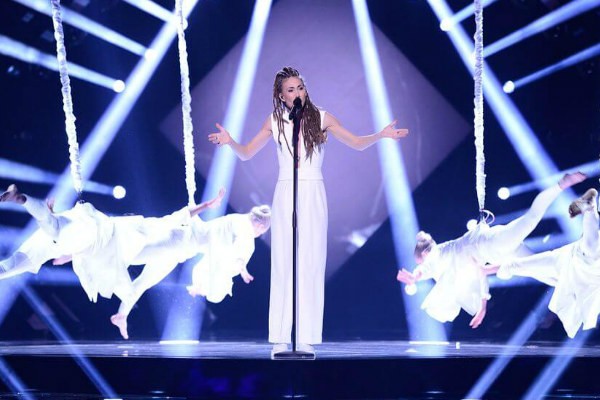 Melodifestivalen 2017: Mariette wins the audience poll ahead of Semi-Final 2 in Malmö

I’m late with this, but here is how I saw the first semifinal: 9.45 Joci Pápai: “Origo”+ Much better with the new background. 9.35 The Couple: “Vége van” I actually thought this unique sound of theirs could squeak in. 9.30 Gigi Radics: “See It Through”+ Again, all strings and no percussion makes this song feel like something’s missing. Once more, it sounds like a mashup of Beyoncé and Mary J. Blige. 9.30 Soulwave: “Kalandor”+’ Their chances just took a big hit, given that they needed a public vote to get in. 9.30 Spoon 21: “Deák” I knew it was going… Read more »

I think it’s a joke that Spoon 21 fail to make a final. So now I’m counting only for Gabi Toth…

#JociFTW
I’m worried about juries there but hope for best, yet Toth is a serious concurent for him but I suppose the less complicated song will still have a lead, maybe just slightly.

I’m glad Papai Joci team was aware with a critics of their staging with changing the background. This is much better and i hope he would win the whole thing

Adam Szabo has this in the bag! I hope he wins! Get revenge for the horrible placing of Freddie last year and qualify to the final!

Hah! Not much love for the juries here, and I can see why…they are clearly biased towards female ballads (we’ve enough of those, thanks!) that sound about 10 years behind the times. Thankfully, Papai and Soulwave made it through. Rooting for Gabi in tomorrow’s semi! #TeamGabi

I agree with the results mostly. Soulwave should not be in the final but that is a minor complaint. I love Gina and Gigi is good, too. Even though I do not like Joci much, he has a good song. Hmm…not bad!

Gina can sing, period. I was happy to see Gina and Joci went through today, probably my two favourites. My opinion is that Gina, Joci, The couple and Mrs Columbo were the four best out of the 30. I would be happy if Gina or Joci got out to the ESC, although my bet is that the final four will be Gina, Joci, Gabi and András, from which Gabi or András will win the televote.

Dissapointed with some of the results. The jury isn’t acting well and profesionally as it should… The two ballads qualified aren’t that good, I’m not going to talk about the 10s from the jury to Gina because is just ridiculous. Instead of those songs, David Henderson, Spoon 21 or Chase should made it.

It seems is going to be a battle between Papai and Gabi Toth. At least that is how it should be, both are really good. Soulwave is being buried by the jury so they don’t stand any chance…

Nice to see that Joci Papai has won this semifinal, hope that tomorrow Totova wins as well

Gina and Gigi to final? Are you kidding me? Outdated, boring ballads. We already have many of them. Why juries didn’t like modern, fun, catchy song of Spoon 21? It was really fresh and their performance was something we haven’t seen before.

Thank God, Joci Papai’s Origo made it through, it’s the only song i want to listen to again from these four finalists.

What is up in Hungary?

The jury is absolutely pathetic…….they chose the worst of the 3 slow ballads as the winner of the semifinal really Gina ?? Pathetic……….Even Singh Viki’s ballad was better than hers……. At least we know she aint winning even if the possibly sedation-loving jury send her into the final.Gotta support Totova/Papai Joci/Soulwave now.

OMG. Gina Kanisza is a horrible Choice for Eurovision – we dont need another singing lady atm – of these four it has to be Papa Joci. I really like Soulwave as well, but they are maybe a bit to similar to Kedvesem in sound to stick out. The two Girls would be HORRIBLE Choices, especially Gigi Radics – it wouldnt even qualify for the finals! So sorry for Spoon21 – they have the absolute best song of the entire national season 🙁

@Cambell Grace: You appear to be bullying one individual for their musical opinions. Please stop doing so from this point onwards. Feel free to state your own musical opinion instead. Thank you.

They better change the judges for next year. These songs are just bad, they have so many amazing songs this year and they choose those 4 really? Soulwave is awesome and Joci is great but the other two… no. Boring ballads

Of course the jury will give top marks to a bland ballad sung by a woman. LOL

Joci’s song has the charm, so please choose him Hungary.

I’m starting to fear for my fave Gabi Tóth. If she makes it to the final, will the juries pick her culturally relevant masterpiece that is so popular among the public, given the fact that it’s by far the most viewed on the A Dal channel? Those incompetent juries will definitely send Gina Kanizsa – who has no chance of doing well in the televote – instead of someone actually deserving. I’m salty rn.

Okay, enough with the YouTube “outings.” I know I started it, and I’m really sorry to everyone that I did. A good friend has recently reminded me that privacy is very important and should be respected.

As for Hungary, I’m for Totova (or Gabi Toth) all the way and have been from the very beginning. 🙂

Gigi’s song is disgusting.
“Fall Like Rine” is awful.
“Kalandor” is weak.
Luckily, we have “Origo”. A truly masterpiece.

I don’t really like the qualifiers of this semi. Last semi was slightly better.

Were the jury smoked weeds before the show?

They made themselves the biggest joke of the whole adal2017!

Spoon 21 deserved to make it. Anyway, I’m hoping Gabi will do well tomorrow.

Slightly disappointed not to see Spoon 21 in the final. But as long as Papai is there and (fingers crossed) winning the show – I am all happy. Dear Hungarian folks, I know this is your choice and we will respect it in other lands of Europe. But look how many female ballads we already have in Eurovision? Wouldn’t an alpha male like Papai stand out and give you an extra edge?

@eurovision6 Don’t worry, many of us do not like them :/ 😀 we think every week that it cannot be worse… but it is worse.

Shocked after this result, Gina has a boring ballad, along with Gigi, Soulwave really needs to improve its staging and voice (however, the guy had feelings in his face which is positive improvement after last week), Joci was good, but somehow I felt something is missing, he changed the visual but it was not the best… anxiously waiting for tomorrow 🙂 #teamGabi

Do the people in Hungary even like the jury themselves? I mean Gina going through.. SHE CANT SING… meanwhile the jury decides Soulwave, Spoon 21, Chase and David Henderson are not good enough? As Lisa Ajax would say I dont give a f anymore…

The funniest part of this was Gina Kanizsa getting all 10s from the judges for her water commercial background music, and then the public giving her a 5. What a flop haha!
Gigi Radics also has a boring ballad that wouldn’t make it past the semi-finals, but who cares? Kalandor and Origo advanced, and those are good songs!
I’m waiting for tomorrow’s show, I’m absolutely #TeamGabiTóth!