They’re the Estonian duo who beat ESC2015 veteran Elina Born and international Estonian popstar Kerli to win Eesti Laul 2017 in March. And despite being a notable absence on the preview party circuit Koit Toome & Laura have been hard at work preparing themselves and their Shakespeare-infused song “Verona” to take the stage in Kyiv. Their latest step? Shooting their postcard, the short clip that plays before every Eurovision act performs on stage.

The eye-catching Estonians chose Lahemaa National Park on the Gulf of Finland for their backdrop. Through her Instagram page, Laura shared snaps of herself getting down and dirty, all in the name of getting the perfect shot. With voting in Eurovision’s Next Top Model 2017 underway, that’s the kind of attitude we at wiwibloggs heartily endorse.

According to the captions, it was an early call time for the shoot, and putting in those long days and hours will be great preparation for Kyiv. Eurovision is an endurance game, y’all!

Having wandered the woods, they headed indoors to shoot at Noa Restaurant, a glamorous seafood restaurant in the Estonian capital Tallinn.

After serving fierce fur in the wild woods, Laura showed her fashion-forward side rocking a fabulous frock.

She was joined in the restaurant snaps by duet partner Koit, who dropped the leather jacket from the music video in favour of a smart blazer and chinos look, giving us debonair daddy for days vibes.

The pair may have been quiet for the past few weeks, but things are about to heat up.

With just four weeks to go until Eurovision fortnight, Estonian broadcaster ERR will be shepherding them through final rehearsals and ensuring the stage show is as strong as possible for May.

After Jüri Pootsman unfortunately crashed out at last year’s semi-final, there are high hopes that Koit & Laura can turn the ship around for Tallinn and put Estonia back in the Grand Final. Only time will tell.

What do you think of the snaps from the postcard shoot? Are you excited to see the finished product? Can Koit & Laura make the final? Let us know in the comments below! 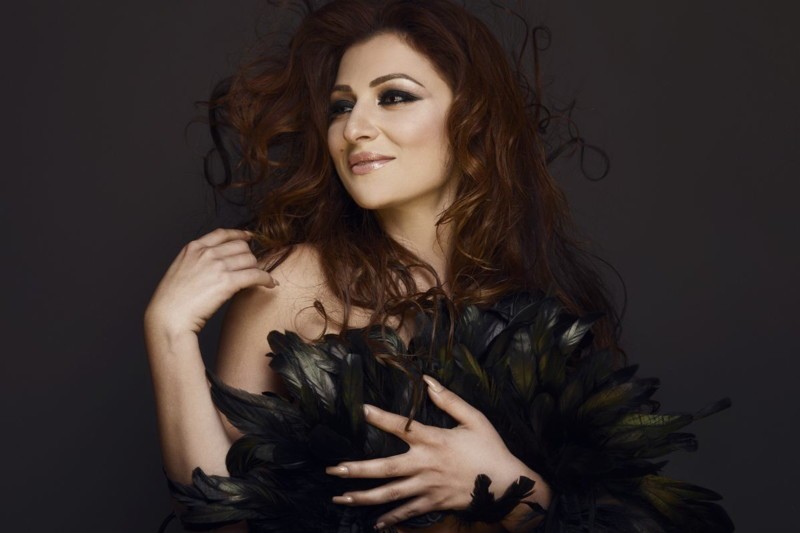 Wow they look amazing in that photo! 🙂

I absolutely love Verona <3 My #1 this year! Will definitely qualify, only question for me is whether it will end up Top 10 or Top 5 😉

Is it true that the national broadcasters shoot the postcards themselves this year?

Pavel: Elina and Stig came to ESC 2015 with a song that was very reminiscent of quite a few late-1960s songs. Koit and Laura’s song is a lot closer to modern.

Looks like they’re just copying the postcards from 2016, or showcasing the sites of each country, which would be nice in terms of celebrating diversity

Would have been nice to see them at some of the parties, but I doubt it makes any difference for the end result, whatever that may be. Only fans and journalists follow these closely, whereas 99% of the voting public won’t have any idea who went to what party and when. Jüri went to several parties last year, and it didn’t help him any in the end. Stig & Elina went to none, and still did well.
Pics look cool! Hope the postcard is nice.

Why are y’all doubting this song? It got a resounding victory in Estonia, even when Kerli (the biggest musical export Estonia has ever done) was competing. That performance is perfect for TV with those camera cuts and stuff. The juries may Poland it, but the public will love it enough to ensure it a great position. Unless the juries will get some taste, of course, then we would have huge points from them as well.

@KYLLITO common opinion tends to be that the preparty circuit doesn’t matter too much to final results. The Common Linnets performed poorly in Amsterdam but aced it in Copenhagen for example. What is clear is that all of the recent winners (since 2013) have hit the promo circuit in one way or another, but how much impact that has isn’t clear!

This is old fashioned but in a good way, digging pop-dance ballads from the early 90’s. A top 10 is possible, but the right staging is required.

In past years, are there any notable acts that shunned the pre-Eurovision festival circuit and did well at Eurovision? 2017 notable absences are Estonia, Portugal, Australia (understandable since they are from another hemisphere), Croatia, Iceland, Greece, Russia. The only entrant I can think of that may not have been on the festival circuit was Dami Im from 2016. I would love some feedback.

Yeah!! We haven’t seen them in any promo event and I thought they were lost!
And indeed they’re lost in the woods shooting their postcard!

Looking forward to their performance in Kyiv!
I was so upset with Juri not qualifying last year (last of its semi??). But I understand it was maybe too old fashion and dated for the public!

Estonia is in an open semi this time, they can qualify!
Go Estonia!

Laura Poldvere, Lucifer Remmel and Paula Mustikas… one in three, TRIUNE. I’m convinced she is the true Messiah, and let me tell you guys her fan club #MafiaDiVerona is organizing a pilgrimage to her hometown Tartu this July. I hope many other disciples join! <3

Bulgaria who? Estonia is the only country that can challenge Italy's victory, and I'll be voting for them from Italy in the grand final. And of course, they're looking flawless and dramatic in these postcard shoots. Legends.