Robin Bengtsson has altered the line-up of his dancing crew following his Melodifestivalen victory. And the addition of Alvaro Estrella has fans wondering if Sweden will secure a third-place finish at Eurovision. Let’s take a look and find out why.

In May, Robin will be joined by two dancers from his old gang — Lamin Holmén and Kevin Foo — and two new dancers — Alvaro Estrella and Patrik Riber, both of whom will also contribute backing vocals. Former EMD member Erik Segerstedt will again serve as an offstage backing vocalist.

Melodifestivalen fans — and hardcore Eurovision fans — might recognize Alvaro Estrella. He previously took part in Melodifestivalen as a solo artist back in 2014, but didn’t advance from the semifinal with his slightly sexual entry “Bedroom”.

Alvaro debuted at Eurovision in 2011, when he was one of the backing dancers with Sweden’s Eric Saade on “Popular”. Despite being one of the big favourites ahead of the contest, Sweden finished third after Azerbaijan and Italy.

Then last year Alvaro was asked to do backing vocals for Russia, when Sergey Lazarev represented his country in Stockholm with “You Are The Only One”. While most of the time Alvaro and the other backing singers were hidden behind the massive LED wall, they appeared for a short while alongside the star himself. Like Sweden in 2011, Russia was also a favourite to win the contest but finished third behind Ukraine and Australia.

This year Alvaro will join Robin Bengtsson on the treadmills for “I Can’t Go On”. Does having Alvaro on the team predict a third place finish for Sweden? Or is this just another Eurovision curiosity?

Yes, we know Alvaro also did backing vocals for Azerbaijan in 2013, but he didn’t appear on the stage at all. So that doesn’t count, ok? 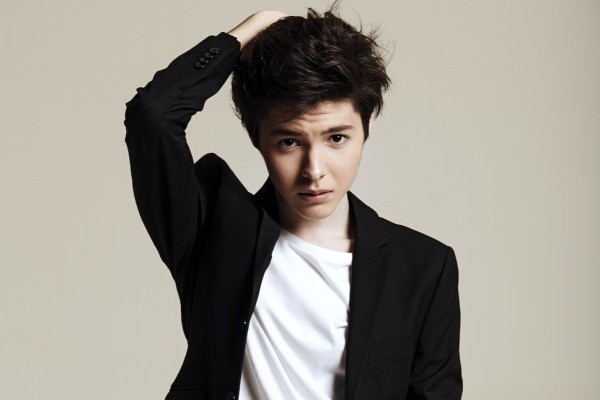 Yeah, production and package may take it up to 3rd place, but we’re still underrating another stage works, lives – lots of em better than swedish this year, and overall packages that make dark horses to conquer top. I’m wondering though, why swedish dancers are so popular choice for some countries in contest? Are they offered in bulk along with the song? That sounds… disrespectful to your own talents.

People might love or hate it(which they seem to do a lot, but what’s new) but what makes Sweden a contender every year is the production. We treat our MF entries like regular songs, and don’t neccessarily view them as “for ESC”. That’s the same way we treat our pop songs, we won’t be satisfied until they are absolutely polished an impeccable. That’s what made Max Martin and other producers so successful, and that’s what makes our entries in ESC so successful. We realise it’s not just about the song but the impact as well. That’s also why we end… Read more »

YES!
They laugh at 3rd place for Sweden, while at the same time many countries can just dream about 3rd place..

Actually, regardless of Estrella, 3rd place is very likely for Sweden, right behind winner Italy and a ballad in 2nd place – Portgal, Bulgaria or Belgium.

A third place finish is still a great thing… It seems Italy is a lock for the win with only Bulgaria possibly pulling off an upset with the Russian withdrawal. Belgium is fading a bit and may take on 4th place.

These kind of acts end up being third not because a certain crew member, but because they try to win the contest with performance, while not having a good enough song or message. If there’s an entry with a more endearing song (2016 Dami Im) or message (2016 Jamala), the performance piece will lose to them. This year it’s going to be either Artsvik or Joci Papai 1st, Robin Bengtsson 3rd and possibly Gabbani 4th (I’m predicting him to competely flop tbh).

Lmao just kidding. But if this pattern does go on, maybe we’ll win again this year? I hope we do it this year tho

I’m a swed and I don’t think we we deserve to win this year. I am happy if Robin end upp top ten and I thing he can be top 5. I hope for Belgium.

I think that scenario might be more true: 3rd place this year and win next year!

@Mvula
This is the most stupid i E V E R reed. The song who got the most pointss are tge wunner. Not a contry who never winn. What have Christer Björkman do for Sweden winn. Pirtugal and Bulgaria are not be top 3. Italy are, but not gonna be a winner. And stop hate

“And stop hate”. Says tye biggest hater of them all. You Sweeds can be some of the most hypocritical people sometimes. You spread hate on all the songs that you dislike, but no one should dare speak lowly if Sweden. You’re pathetic.

You are pathetic, go away, dumb nationalist, you are worst than Greek nationalists.

Nooo, I was hoping he’d keep Daniel Koivunen. 🙁
Perhaps they wanted to maintain diversity, for lack of a better word. Could be any reason ofc.

Apparently, Daniel is busy with other engagements during the Eurovision week and therefore he can’t attend.

No, Sweden won’t be 3rd. It won’t be in top 3 at all… Italy, Bulgaria and Portugal will fight for the crown. I actually think this’ll be the top 3, in that order (although I’d wish Bulgaria or Portugal to win for the 1st time; Also, Italy deserves winning the contest after being robbed in 2015 ~ Il Volo ruled). As usual, Sweden is overrated. They won 3 times in the past 20 years, let other countries win and host!!! Especially that some countries never won! Portugal, Iceland, Romania, Bulgaria, Moldova, Lithuania, Belarus, Armenia….to name just a few! But as… Read more »

Oh shut it will ya. You are nothing more than a narcisistic Sweed. Sweden could send 2 guys farting for 3 minutes and you would call it a masterpiece, like the pathetic nationalist you are.

Well if countries like UK really made a serious attemt every year, then they whold be top 10. The same for many other countries.

I’m from Sweden, but I completely agree with you. We DO NOT deserve a good place this year at all. I’m hoping for Bulgaria, Italy or Belgium.

Italy might be a contender but Bulgaria an Portugal definitely not. Both songs are total fanwanks and Portugal is a borderline qualifier.

Sweden will be top 5 though, top 3 even!

He was a backing vocalist for farid mamadov in 2013…..

And no, none of the other finalists in MF would win ESC either. They didn’t bring anything new to the table. The years Sweden win is the years we offer something new.

Bjorkman needs to re-think how to play and surprise.
Even Mans couldn’t win the televote with that package.
Sweden might need to show their emotional side for once, instead of bringing something super calculated. And Europe will fall in love with you.

Still think “Jon and Aninia” was the perfect opportunity to show something different for Sweden, or even Nano who had the “Hit” element and it wasn’t cold at all.

It’s almost sure that Finland is going to win!!! Why??? The final is held on May 13. The only other contests held on May 13 took place in 1995 (won by Norway, second time overall!!) and 2000 (won by Denmark, second time overall!!). Finland is the only Nordic country that has won once before!! It’s so obvious!! [In case you didn’t notice, I was being sarcastic. Picking the right data you can predict almost anything. I know that this is a classic case of “If you don’t like it, don’t read it!”, but I think that all these “Does xy… Read more »

Haha, well said, but how else can I see people fighting in comments (hold on, let me get my popcorn :P)
Next time I expect some illuminati conspiracy based on numerology!

Its so many haters here. Why are you hate altime. Stop hate. Its always the same people. Its not my favorite, but stop HATE

Why are you talking about hate, when you spread the hate below every single article about Italy? Lol.

You are such a pathetic and hypocritical Sweed. You literally throw hate at every other song, but hating on Sweden is wrong cause reasons? Please. Grow up dumbass.

lol michaela i was just about to say the same thing…

omg says the person who is a hater himself 🙁

Wiwibloggs can’t you ban this guy, he is so boring and hateful for all countries that aren’t are stupid overrated dumb cheap Sweden..?

It’s gonna do very well….. The performance is slick BUT the song without the performance is just not that amazing.
I am cool with Sweden achieving a Top 5-10 result but I wouldn’t like this to win.
There are better songs this year.

Wiwibloggs don t delete your comment to me. If I wrote this to you, my comments will be delete by them.

pp the most tiring person
Reply to  PP

yes you are a poor victim of wiwibloggs, let me cry for you

PP
Reply to  pp the most tiring person

I m wonder how , they allow your rude and primitive comement to me.

Who wrote rude comment , me or he. And wiwi don t delete his rude comment and aprove that behaviour from him.

I also think the televotes will be something like that

Sweden won’t qualify this year, their #1 slot has cursed them 🙂

It will win the semi final!Number 1 isn’t cursed in semi-only in final. 75% of songs who started first has qualified to the final.

One thing is sure: Sweden is not going to win! Hopefully…

3rd place isn’t unlikely but I hope it finishes much lower because Sweden needs to be encouraged to stop sending ultra basic stuff every single year. Serve some personality, henny.

I would not call Loreens win as basic. Very creative in fact… but I get your meaning.

I partly agree, as a Swedish person. I was really rooting for something different (“Hold On” gave me the same chills “Euphoria” did.) This is very similar to CSTF by Justin Timberlake – good song (great looking guy!) but…I don’t wanna see it win. So I’ll take third place. Sanna finished third after Malmo, them Måns won the following year (new trend?)

There are few more true expressions of Swedish culture than ‘basic’ pop music.
For instance, people like to point out that I can’t go on sounds like Can’t stop the feeling, but that song is of course written by the greatest Swedish musician in modern times. You basically can’t get more Swedish than that.
It’s rather ironic that the success of Swedish music has left people with the impression that Swedish music sounds unoriginal. Yes, it is, but the Swedes can’t be faulted for that. For the same reason Swedes can’t be faulted for IKEA or H&M being unoriginal.