He’s the only artist at Eurovision 2017 to have competed in Kiev when the city last hosted. And after failing to qualify for the grand final in 2005, Omar Naber from Slovenia is “on his way and never coming back”, so he better slay this time around!

Our very own Deban sat down with Omar and talked about his song, his staging, and his performance at the rehearsals. “On My Way” is probably the most theatrical song of 2017, bringing a Broadwayesque feel to Kiev with the singer standing alone and filling up the arena with his incredible voice. Nevertheless, the contestant made it clear that the staging is fully his team’s responsibility: “I’m a singer – that’s enough, let the others do their job”.

What did he do in 2005 that he won’t be doing this year? “I was quite irresponsible… It was stupid. I was immature”, Omar reflects on his partying all night when he first represented Slovenia at Eurovision 2015. “I wasn’t grateful enough [to be at Eurovision]. I’m much more grateful this time around.”

The Slovenian representative put to rest the rumors that he’ll be wearing his 2005 Eurovision costume again. The singer is clearly happy with his new stage outfit: “When I first saw it, I immediately fell in live with it. It shows a lot of glitter and glam, but at the same time, it’s very mature.” Indeed, Naber has changed a lot over the last 12 years, and that’s evident in his new passion: tattoos, of which he admits he has a few. “If everything goes well [at Eurovision], maybe I’ll have another tattoo” he reveals.

Meanwhile, Omar has been sharing pictures from Kiev on his official Facebook page, and he certainly doesn’t spare loving emojis to express his fascination with Ukraine’s capital. The Slovenian star has proven that just like on stage, he knows how to create a dazzling scene of sensual grandeur in real life too: he recently shared this shot with the caption “Connecting with spirit of Kiev & soul of Eurovision”.

Connecting with spirit of Kiev & soul of Eurovision Song Contest ?? Have a nice day everyone. ?https://www.youtube.com/watch?v=smhccEQrfnM

If this is your jam, don’t forget to tune in to the first semi-final to support “On My Way”. Let us know in the comments which Omar Naber entry you prefer. 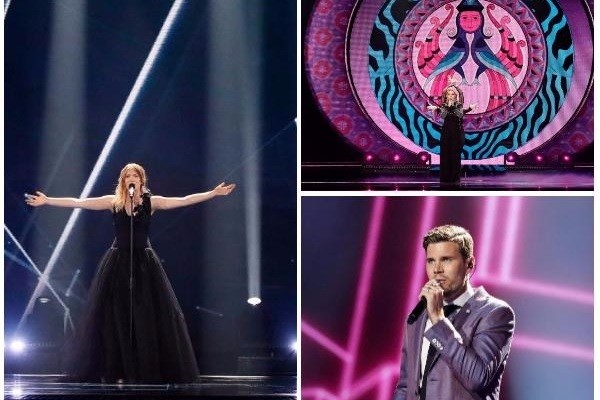 Laura competed in Kiev as well