They’re the telegenic stars who share talent, beauty and the experience of representing Azerbaijan at the Eurovision Song Contest.

And on Sunday DiHaj, Samra, Sabina Babayeva and Ell & Nikki all shared another experience by performing in the closing ceremony of the fourth edition of the Islamic Solidarity Games in Baku National Stadium.

The games, which welcomed athletes from 54 countries from Algeria to Sierra Leone and Turkey to Tajikistan, ended with a bang as the Land of Fire’s Eurovision stars turned the stadium into a dance floor.

During the pre-show, DiHaj warmed up the crowd with a series of Azeri songs and, of course, her Eurovision 2017 song “Skeletons”. Then the real party started as six thousand athletes paraded in with their flags. Ninety minutes later, when they were all cozy, Eurovision 2016 star Samra drenched the stadium in gold and glitter as she performed “Miracle” (from 1:28:35).

Eldar and Nigar also appeared at the closing ceremony, but they didn’t reprise their duet “Running Scared”.

Instead Nigar sang her latest single “Sus” and Eldar performed “Tell Me About Love” (1:54:20). We love it when he gets all lovey dovey!

Istanbul will host the 5th edition of Islamic Solidarity Games in 2021. We’ll keep our fingers crossed for Sertab, Hadise and maNga to take the stage! 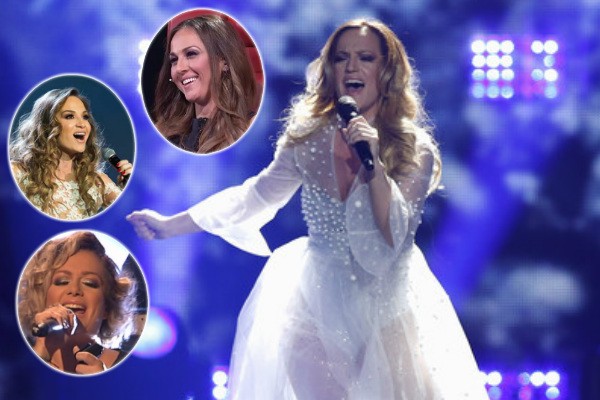 Serbia: What’s next for “In Too Deep” singer Tijana Bogicevic? I’m against religion in general but Islam especially. It’s not only sexist but absolutely the most homophobic religion out there, which is why I don’t understand why MANY western LGBT people support Muslims and their practices. If they had their way, many of them would kill us.

Oh my god this was the real reason for the song!! Samra sings ‘Gonna take America’ in front of thousands of Muslims and US will think its just an ESC song.

I wonder how many isis members were at this

Isis is not islam you moron

Isis is Islamic everyone in the earth knows this so u r the moron. Isis stands for ISLAMIC state in Iraq, so it does involve Islam and that whole azerbaijani race probably work them

lol wtfff , it is not difficult to guess your name. But you are coward enough to use different user names. Do you want me to talk about crimes your race have done?

Islamic Solidarity games?? Really? How can such a thing exist?? All the participating countries have other religions that Islam in their land. Hmmm and then you wonder why this world is a vast piece of sh… How can you create and even have the idea of creating such a competition with a name Islamic bla bla bla ?What if you are catholic or an atheist or a Jew in Azerbaijan for example? Man there were other names to pick. Just Solidarity games was perfect.

We didn’t find that name. We just hosted it. We hosted the 4th edition. Every year, we host something, and we don’t find the names. And your religion doesn’t matter in Azerbaijan. There are lots of catholic, atheist, deist and jewish people in Azerbaijan. We don’t have any official religion in our Constitution.

My statement about ISIS wasn’t supposed to you. But I don’t know why it showed up as a reply :d I’m sorry.

I want to say that being muslim doesn’t mean you support ISIS, or it doesn’t mean you are a member of it. ISIS members do terror attacks, which are not nice, real muslims never do this kind of things. I am also a muslim, and I hate the things that ISIS members do. Islam is not about those rude things. It all started in Syria,(the reason is unknown) and we that real muslims never support this kind of things.

Oh I’m not talking about ISIS at all, I’m talking about Islam. I live in France man, I know what Islam is and isn’t. Religions are way too present in our societies and having something called Islamic games is….. absurd to say the least. I was just wondering how can such a thing can exist. It is called Islamic games, not All religions games, or Religions Solidarity games.

The OIC is meant to promote The Islamic economic and societal values. You know like I know there is always a risk of religious proselytism. Monotheistic Religions are all about domination and power to one God, having something called Islamic games doesn’t help much. It segregates communities. But whatever, they’re free to do it if they want. I just find it shocking.

Twisted French,you are unfortunate enough to witness some awful deeds that were done by savage and ignorant muslims. But as an agnostic azerbaijani, I would not let anyone to insult our muslim people in my country. We do respect holidays, gatherings, solidarity of jews, christians, believers or non-believers and there is nothing wrong if muslims come together and show some solidarity. If they were did not respect values of Azerbaijani society shares then they would not come here. You can live in France and see muslims from Arabic and other parts of the world. But do not forget they are… Read more »

I’m not insulting Muslims. Why would I? I don’t care about religions. I’m into humans, not Gods. Why would I insult Azeris? I just think that we don’t need more religion in our societies. So having something called Islamic solidarity games is annoying to me. You can gather around people and promote peace with something else than Islam, or another religion. There’s no Christian solidarity games or Jewish games, what’s the point of Islamic games? Except promoting the Islamic values, which are, and you know it like I do, and like any other monotheistic religion, meant to impose to others… Read more »

I did not say you are insulting my people. I did not refer personally to you. That is why I used “would” and “anyone” words. You think “one god”religions force others believe what they believe in. Maybe, you are right bcz history and social tendencies show what you are saying. And here is, education plays an important role in societies. Lots of countries are not successful enough to separate religions and state laws. And they will live such problems until they realize it. But I personally think spirituality is important thing in societies. Certainly, religions and spirituality are different things.… Read more »

Well, you know you are preaching the preacher 🙂 I can’t agree more. Since we are on a blog about Eurovision, I think it’s best to gather countries around music rather than religions. Or just sports like the Olympics where religion is never mentionned. Or anything else but religions that are personal choices. Then, you know, people are free to do whatever they want and believe in whatever they want to believe, that’s not up to say who’s right who’s wrong. If you ask me, I would like all religions to be kept private, as well as atheism. This should… Read more »

And it seems to me that only brains are barrier to your dream. Though it is impossible in next couple hundred years but I also hope for a peaceful, borderless world and living where we can discuss philosophical state of minds 😀 We have lots of things to discover and improve on the this planet.
cheers

Beautiful stage! But why playback??

I’m not insulting Muslims. Why would I? I don’t care about religions. I’m into humans, not Gods. Why would I insult Azeris? I just think that we don’t need more religion in our societies. So having something called Islamic solidarity games is annoying to me. You can gather around people and promote peace with something else than Islam, or another religion. There’s no Christian solidarity games or Jewish games, what’s the point of Islamic games? Except promoting the Islamic values, which are, and you know it like I do, and like any other monotheistic religion, meant to impose to others… Read more »

Samra did playback with “Miracle”!

Elnur Haseynov’s “Hour of the Wolf” can also be heard in one of the video montages earlier during the closing ceremony.

Mir Yusif is a perfection 😀

Is this some alternate universe where they actually have an ounce of charisma?

The only universe where they actually believe they are the best … at not singing live. And it’s all fine!

Does anyone know who’s singing and what she’s singing at 1:32:00? It sounds great!

Somebody
Reply to  Somebody

Nevermind I found it, if anyone is interested as well : https://www.youtube.com/watch?v=cf2RKsaR78M

Now, especially seeing her look like this, can we agree that Samra is the Azeri Ariana Grande. I already thought this during Eurovision, but with this high ponytail, I absolutely do.

Not the same voice though….