When Salvador Sobral brought Portugal its first-ever Eurovision victory this May, the country’s broadcaster RTP inherited a mammoth task: organising the Eurovision Song Contest 2018. Lisbon, Faro, Guimarães, Gondomar, Santa Maria da Feira and Espinho are already bidding to serve as host city. And there’s one other gig that RTP will want to start thinking about. Who will serve as the face of the nation by acting as host of the three shows?

Since Salvador’s incredible win in Kyiv, there’s been frenzied questions and rumours about who RTP should invite to host the contest. A number of hosts and actors have expressed their interest and it’s quickly becoming a matter of 40 dogs for one bone.

And what a bone it is! Watched by more than 180 million people this year, Eurovision can define a TV presenter’s career and take it to the stratosphere. It’s also high stakes. Portugal wants to put its best face forward — and it needs to look good and ooze warmth and humour. So, as a Portuguese Eurovision lover, I thought I’d name my favourites.

A 44-year-old TV presenter and actress, Catarina Furtado has media in her blood: She’s the daughter of noted RTP journalist Joaquim Furtado, who famously reported on the Carnation Revolution military coup in 1974. But Catarina is definitely standing on her own two feet, having worked with RTP for the past 14 years.

She has immense experience hosting televised talent shows, including the two most recent editions of The Voice of Portugal — the network’s highest-rated show. Perhaps most germane to this discussion, she also hosted the 2017 edition of Festival da Canção, which resulted in Salvador singing for Portugal at Eurovision. Kind, experienced and, let’s face it, stunningly beautiful, she would be in her comfort zone while leading the show either alone or accompanied.

Sílvia Alberto is also in the mix.

The 36-year-old stunner trained at the Escola Superior de Teatro e Cinema, so she’s comfortable on the stage and knows how to deal with drama. Just like Catarina, she served as a host at Festival da Canção. In fact, she’s led the show eight times — through good times and bad, through the amazing Suzy…and Homens da Luta.

A former Disney Club presenter, she hit the big time when she presented Ídolos — the Portuguese version of Idol — in 2003 and 2004, alongside actor Pedro Granger (more on him below). Since then she’s hosted other talent shows including Operação Triunfo (2007 and 2011) and most recently, Got Talent Portugal. From circus performers to dance troupes to singers, Catarina has dealt with them all.

When it comes to the green room — where a host needs to draw out the personality of the acts — the obvious choice is Filomena Cautela.

Funny, charismatic and welcoming, Filomena was Portugal’s spokesperson in this year’s Eurovision final (watch her from 23:52 here). She currently helps laugh Portuguese to sleep with her comedy chat show “5 Para A Meia Noite” (Five to Midnight).

She’s no stranger to the world of Eurovision either. As with the earlier ladies, she played a role at Festival da Canção 2017, hosting this year’s green room. In Portugal, everyone knows her and almost everyone loves her.

He’s perhaps the country’s most famous diehard Eurovision fan — and he’s very easy on the eyes.

Pedro Granger — Portuguese TV host and actor — has traveled to Eurovision each year since 2011, choosing to watch the contest live and in person rather than admiring from afar. Right after Portugal won this year’s contest, the 37-year-old stud took to Instagram where he confessed that he’d love to host the show.

“…And to answer all your messages about me hosting Eurovision here in 2018, of course it would be a dream come true but I know that it’s going to be 40 dogs for 1 one bone.”

Pedro may make a good double act with Sílvia. In addition to co-hosting Ídolos, they also co-hosted Festival da Canção 2012.

While the potential hosts battle it out, there are two other personalities who can rest assured they’ll be working in May.

So, do you agree with our picks? Do you think that there is someone else who should be given a chance? Let us know in the comments box below! 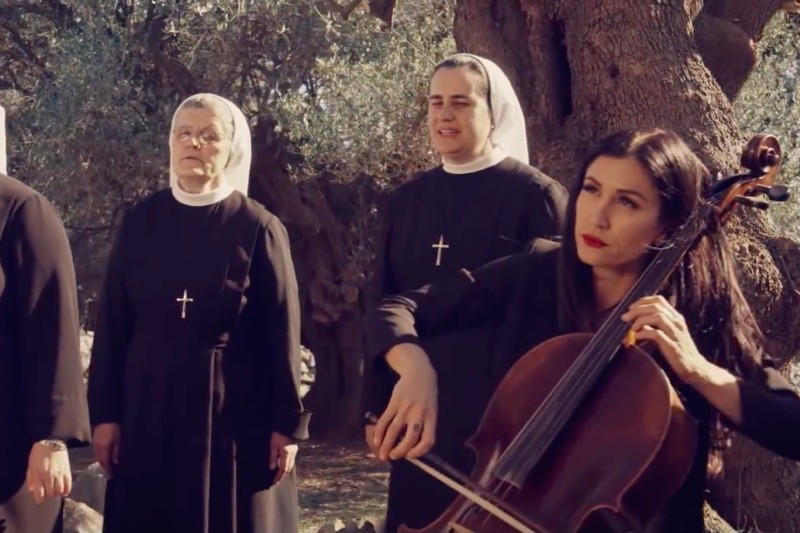 Cello meets gospel: Ana Rucner teams up with the Sisters of Charity for “I Will Follow Him”

MY ANSWER: All of the above. Seriously, that can break the record for biggest number of ESC hosts. 🙂

Sílvia Alberto and Pedro Granger for sure!! They actually love Eurovision and they both have already been somehow envolved in the show. I loved when they were our commentors (just like Graham Norton, for example): they gave us all the information with attitude, but without stupid comments and keeping it clean and simple.
For the greenroom Filomena or Catarina would do a great job

I could see Suzy maybe in the Green Room. She knows what it’s like to be there. 🙂

I think that there are several options available. If you think “local” you have the 4 mentioned: Catarina Furtado Silvia Alberto Filomena Cautela Pedro Granger You may also add to this poll: Diogo Morgado Vasco Palmeirim Lucia Muniz Mariana Monteiro Paula Lobo Antunes Rui Unas Pedro Teixeira … (Me) LOL (But I’m up for it if I’m called to the job) If you look at it globally, thinking of international stars (actors, musicians and hosts) that have “portuguese” blood and close to the country …I can remember: Daniela Ruah Nelly Furtado Shawn Mendes Now, not all have the same profile.… Read more »

I just found out Pedro Granger is in the new telenovela from TVI (portuguese channel)… sooo the chances of him hosting just went down .____.

That telenovela was shot over a year ago. Altough it is still on air, they have finished working on it.

oh I didn’t know that but maybe his contract with TVI continues… ? :/

Suzy is better…
Her English is perfect & strong

Filomena would be cool.

Luísa would be an EXCELLENT choice, but I don’t think she will be interested.

Me, myself and I

Suzy would be an awesome choice.

Looking at Portugal’s track record for entries (in particular 1967), I wouldn’t be surprised if we had the first black presenter in the history of the contest.

What about Arabella Kiesbauer – Austria 2015

Yeah, no. Not gonna happen. In Portugal we don’t even have black presenters on tv shows here.

Am I the only one who wants hosts to speak english, but with a cute local accent?
Why try so hard to speak ”perfect english” whatever that means, because inside UK are many accents as well.
Also, Luisa Sobral looks as tired as Viktoria Romanova…just go to sleep.

tbh I don’t think you will have that accent here in Portugal because, in general, everyone says that our accent is very good and similar to the original

I think Suzy should host.

Give me Granger & Filomena + Catarina or Silvia.. and I’m the happiest girl ! and Suzy for red carpet or press conference…

Nice guy, but can’t speak english to save his life.

You have 2 of my choices
My dream Hosts are:
Katia Aveiro
Filomena Caurelio
Pedro Granger
Also having Salvador and/or Luisa hosting the green room would be excellent.

I think Suzy would be better for the Green Room. Nothing against the Sobral siblings, but they don’t seem to be the best to host it. Perhaps Luisa could do it.
But I think it would be nice if they were spokespersons for Portugal.

I loooooooooove the Sobrals, but they don’t seem like presenter material to me. They’re musicians.

Let the presenters present, and have the Sobrals sing their interval acts, maybe with guests too. But we definitely need a duet from them.

They could tell Portugal’s saga at Eurovision until the victory. That would be interesting to watch.

its Suzy not Luzy….

Filomena Cautela should really be part of the team because she is fun, looks nice, can improvise and speaks well English. Catarina Furtado is an obvious choice as well because she is a great professional and super telegenic but I am not sure about her English. I am struggling to find a male candidate, though… any ideas of non-stuffy well speaking English presenter?

Diogo Morgado, if you look outside of the world of TV presenting, maybe

Cristina Ferreira and Manuel Luis Goucha are the best presenters of Portugal. “Você na TV” is the favourite talk show in Portugal.

They are exclusives of another station, and if Manuel Luís Goucha were to host, ESC would have a lot of french speaking. (See the 1999 votes)

All good choices by the look of it (I’m not it familiar with any of them!)
How are their language skills? I’d like a mix of genders
I predict ROnaldo will make a cameo (in video form)

That’s Graham Norton and he’ll present when the U.K. Wins

Graham Norton and Rowan Atkinson will be awesome!

Yeah, I’d like to see him host the Green Room – “Hello Danish delegation, why the fireworks? Music isn’t fireworks …”

ahahahahah that would be awesome!!

Wait Faro wants to host? When did THAT happen?

Where is Daniela Ruah?

She’d be my pick (although then again I am commenting here as an American Eurovision fan). She’s become well-known here in the States for her role on “NCIS: Los Angeles”, but she’s never forgotten her Portuguese roots (born in Massachusetts, raised in Lisbon), still able to speak Portuguese fluently as well as speaking English, and her current show does air internationally (including on Portuguese TV), so she’d likely be familiar to international viewers.

And, well, since this year’s Contest was hosted by three men, why not have at least two women host for Portugal’s turn?

Silvia Alberto and Daniela (and maybe Pedro Granger for Green Room) https://www.instagram.com/p/BUFilJoBwON/ – and this photo is relevant

I laughed, I’m going to hell

her parents killled her…so its no possible

“I laughed, I’m going to hell”

I’m happy as long as it’s those aaaaaaaaaaaaaaaaaawful women who would not SHUT UP at festival da cancao. They were horrific!!!

As long as it’s NOT those woman, I meant.

You know, they need to talk since they’re presenting the show…

can die in a fire