She was the UMK 2017 favourite who missed out on representing her country at Eurovision. But Finland’s Emma is making another attempt. She’s auditioning for San Marino‘s national selection, 1 In 360.

The “Circle of Light” singer has been documenting the process on her vlog. She’s been sharing the process with her fans, from the decision to audition for San Marino, to selecting the right audition song.

She’s also shared the emotional side of the process, the difficulty of getting back up again after the events in UMK 2017. In one emotional segment, Emma said, “I have no strength at all to fall again.”

But all the pieces came together and she submitted her audition. Standing in a stairwell (great acoustics, y’all!) Emma sang Andra Day’s “Rise Up”.

The song is all about getting back up, even when the going gets tough. She sings, “I’ll rise up/In spite of the ache/I’ll rise up/And I’ll do it a thousand times again”.

Emma’s fans are well behind her. The video now has well over 3000 views and almost 400 likes.

On YouTube, ESC_And_195 wrote “This is way too beautiful… Every time I hear it I just get goosebumps all over!” While NVideos reckons, “If San Marino chooses her, then they will have a top 10 finalist AT LEAST!”

Emma is keeping her fans in the loop with social media. She recently gave a shout out to her supporters, and couldn’t resist using our favourite phrase: let’s do this!

Oh my! ?? THANK YOU! For all your support and lovley comments! ?? You really have no idea what this means to me! ??? CAN…

The Sweden-based music teacher entered Finland’s national selection UMK with the song “Circle of Light”. It became an early fan favourite, with many assuming it would easily win the national final.

However, despite giving a great performance in the jury rehearsal, Emma’s live performance at the grand final was plagued by a myriad of heartbreaking technical problems.

While the song was as good as ever, the performance was a disappointment. However, Emma still placed third in the competition and was popular with both the international juries and Finnish televoters.

The experience and its fallout was tough for Emma and she opened up about it in an emotional vlog.

But, as Emma explained, she had learned a valuable lesson from the experience. She said:

I realised one very very important thing during all of this and it’s that I will not let hate define me — who I am as a person or who I am as an artist. I know my place in this world. I know my skills. I know my potential. I know what I can do. And I know where I am going and heading. I will get there one way or another.

It seems that Emma is very much on her way to an exciting new stage. We’ve been listening to all the audition videos for 1 In 360, and we have to say that Emma’s audition is easily among the best. The girl can sing!

What do you think? Should 1 In 360 select Emma for the heats? Who else would you like to see in the San Marino heats? Share your thoughts below! 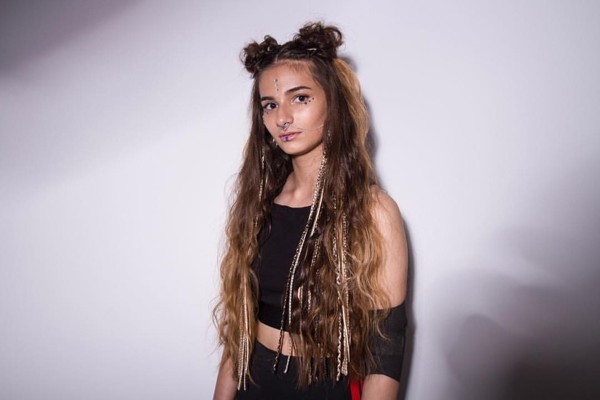 JESC Wiwi Jury: Belarus’ Helena Meraai with “I Am The One” Dear Robyn, Great article! Go Emma! There is one more artist that I would definitely love to see in the San Marino heats, too: Her vocal artistry and musicality is simply out of this earth and totally grabbed my attention! I think she can easily compete with some of the best in the world. I am talking about italian singer/songwriter Silvia Vicinelli. It’s definitely worth checking out more videos by her besides her 1in360 entry to see her incredible range of style, tone and skills. What do you think? Interestingly I cannot find many blogs writing about this amazing artist.… Read more »

What about that one Sanmarinese girl in the selection? They just should pick her.

She is not from San Marino, she is from Italy…

Go Emma! Cheering for you! You and your song were my absolute favourite in UMK 2017! Best of wishes and let’s do this! 🙂 #emmaforsanmarino2018

Hope she will go on to represent San Marino at Eurovision, this beautiful soul deserves it <3

Emma is great but isn’t it kind of obvious that she’d be among the best in a Sanmarinese selection?

Unless someone really huge participates, I think we already know act 5 for Lisbon.

She’s so sweet, wishing her the best of luck! 🙂

I really like Emma as a person/artist. She seems so extremely determined to be successful after that disaster (which is questionable because she did get top 3) at UMK 2017. I really like how she’s using that as a driving force to become stronger, it makes me respect her a lot. Like yeah, you had a traumatic performance, but now you’re coming back stronger to be who you really are. And she can definitely sing!! If SMR pick her, that would be so great

Wow I didn’t realise she had such a good UMK rehearsal. That looks like it would have been good enough to get her through. To be honest, I’ve always thought some of the blame should have gone into the production team as well. Giving someone new a routine where they are mostly static, on their own and with a lot of pauses (which are very hard to time when you are incredibly nervous and just need to stay still and count). I feel it would have been way easier for her if she had more movement queues to different places… Read more »

Well, it seems that the Sanmarinese selection idea will be brought to fruition.
I need to say that the Finnish decision of picking Saara after the submissions was kind of unfair with those artists.

True, great acoustics. Cristina Aguilera, at the beginning of her carrier, used a bathtub, but the audition was on the phone. Is weird to film yourself singing in the bathtub, just for good acoustics. Or maybe is not weird.
I like that she did something especially for this audition, instead of just sending the video from UMK.

Yes, Aguilera said this story with the bathtub, more than once. It was that the producer couldn’t believe that her voice is like in the studio version, and gave her a call, and she proved her voice singing to the empty bathtub. I don’t know if this works for a VIDEO, it might seem like a joke, maybe in a different environment, at a pool or something, only to not look like joke act.

I’m more impressed by the fact that nearly none of the professional singers who submitted actually bothered to craft an audition and just sent pre-existing stuff.