After strong and much celebrated debuts in last year’s Eurovizijos atranka, Greta Zazza and Paula Valentaite will return to contest Lithuania’s national selection.

The two up-and-coming singers received a lot of attention last year and, in conversations with Lithuanian newspaper Zmones, they’ve made it clear they want to win it all this time around.

Greta, who splits her time between Stockholm and Vilnius, says that she learned a lot from her last try at Eurovizijos atranka but this time she is ready to go even higher.

“If before, it can be said, I was only warming my legs, then this time I will go to the stage completely confident in my strength, knowing everything and anything, and with a piece of work with which I have a very strong emotional connection,” she told the newspaper.

Her song “Broken Shadows” has really lit a fire inside her.

“I really believe in the song,” she says. “A small ‘chemical reaction’ has taken place between me and the music, which can be the key to success in both the national selection and, I believe, in the great Eurovision.”

Zazza worked with some proper heavyweights on the song. It was composed by Jonas Thander (Donny Montell’s “I’ve Been Waiting for This Night” and Fifth Harmony’s “That’s My Girl”) and Charlie Mason (Conchita’s “Rise Like A Phoenix”).

This entry marks a sharp change of direction from her last entry “Like I Love You”. While that was upbeat pop, “Broken Shadows” is a more lyrical and meaningful pop ballad. She’s versatile and ready to show off that voice.

Paula Valentaite returns as well, and just like Greta she says she has learned so much from her previous participation. But this time Paula says that she will be much more confident and stay true to herself.

“Participation in the Eurovision selection was the biggest experience of my life, and helped me to make a firm decision not only to connect the future with music, but also to try to win this competition,” she told the newspaper. “This time I go into the competition feeling calm — I’ll be a hundred percent.”

She’s working with a large team on her song. And while it isn’t yet released, the hype is already immense.

Paula says that this number will be much different from her song last year and carry a strong meaning for her. She’s put hard work and her own life experience into the work, which will allow her to sing straight from the heart.

Can these two ladies top their results from last year? Do you think that with the right material they could do well at Eurovision? And what do you think of Greta’s song? Let us know in the comments box below.

About last night: Our @kevoswedo celebrated the #melfest2018 artists’ reveal with a night out…and bumped into fan favorites Dinah Nah ?? and Greta Zazza ?? Talent is always out and about in #Stockholm #melodifestivalen #eurovision #melfest 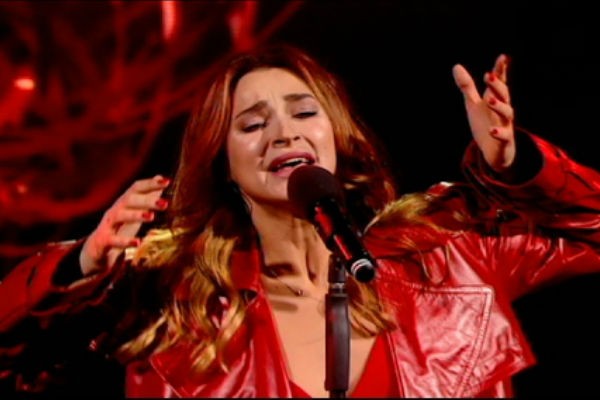 Lame, old, outdated, i smell a 2003 inspirational song from a B Disney movie that everyone forgets in t – 3 minutes.

“Broken shadows” is OK, but only OK, nothing special and then somewhere in the middle it gets boring.. Hopefully it gets changed.

I guess I’m the only one who actually really likes this song. It definitely isn’t as good as “Like I Love You” but that’s a hard song to follow.

Yes, it’s a gift from LRT if you survive all 10 weeks of ‘Eurovizijos atranka’ 🙂

I think Greta had a good song last year (not great). This year, I feel she is trying to play it safe, which never does well for anyone.

oh man broken shadows is the first song this season that sounds like generic American pop music ie ‘something you’d hear playing muffled on the loudspeakers in a Walmart in South Dakota at 2 AM on a Wednesday’
disappointing 🙁 esp. because Like I Love You was my no. 1 favorite out of any NF this time last year

The guy who wrote Gretta’s song also wrote or produced (can’t tell which but I looked on his website for my info) “Bang Bang” and “Shake it Off” and this is what he gave Gretta? She deserves better than this, this is a bit of a letdown, too slow and it goes nowhere. The lyrics are also very simple and superficial.

It’s because she isn’t a global super star… Anyway those other songs are also horrible.

Yooooo. Bang Bang is great, especially the vocals. I don’t know what you are talking about. Shake it Off yes but not Bang Bang.

Greta’s song needs an electronic production. As it is now, it goes nowhere.

It won’t be hard to top last years entry, but I think Zazza has a well-produced, catchy song there that people would remember. Based purely on first listen, I’m not sure it has the potential to match Donny, but if it wins, it sounds like a respectable entry for Lithuania, that could bring them back to the final.

Whilst I think Donny, like Waylon doesn’t have much reason to try again at Eurovision I do love him so it’d be nice to see him again.

If you call them Lithuanian pop divas you should spend more time on research.

She has competed in Lithuanian selection 13 times, so I think that nothing can stop this lady

well, they’ll face tough competition with Erica and Donny. I suspect Donny has something big, to come back too soon (and we know he wants to win the ESC). Or perhaps he tried Melfest, but the song was rejected, who knows?!

Erica’s past entries have been forgettable snoozefests, but Donny truly is strong competition. He’s a fantastic, energetic performer and he has a strong fanbase. Another one in the basket for him?

I like “Leading Me Home”, it’s calm and relaxing. Not a “snoozefest” at all, imo. She’s got 2nd place last year, so still a strong contender. Erica also said she has an upbeat song.
Donny has the “good ambition”, and I believe those girls above have no chance against him. They couldn’t even beat Fusedmarc.

Have you seen that fan favorite Tayanna is also returning to the Ukrainian selection this year? She is also letting the fans decide which song she sings

Omg are you serious!!! Loved her song this year!

Melvin was the fan favourite no?

Very interesting, loved both of them last year.