And on Christmas, well ahead of the first semi-final next year, Stig Rästa delivered his first live performance of the sweet and sentimental track.

He did so on ERR’s Jõulutunnelis (The Christmas Tunnel) — a charity show to raise funds for a family-centered intensive care unit for deeply premature newborns. The centre will allow parents to stay close to their little ones as they undergo life-saving treatment — a convenience that will no doubt put parents at greater ease during anxious times.

For this acoustic performance, Stig stripped back his already stripped-back song, bringing out the tender emotions that define it. He sings with such sincerity and sweetness that it’s hard not to see the original version in a new light.

The lyrics, while not inspired by the struggles of these families, certainly seems germane to the difficult topic — and not just because the song is addressed to “baby”.

As he sings: “I’ll stay here with you my love, if you give a little love to me, put a bit of trust in me, I will build us a home.”

The studio cut did little for me on first listen. But this acoustic version is giving me a whole different since of Stig and his number, which comes to life even with the simplest of graphic elements and some candles.

On December 21, shortly after ERR revealed all of this year’s semi-final songs, PUBLIK DELFI — Estonia’s most-read news source — consulted with a panel of editors and music experts.

Among the panelists were the paper’s chief Eesti Laul correspondent Jaane Tomps, and other music and culture critics from the newspaper. They also invited wiwiblogger Angus Quinn and myself to join the discussion.

After ranking all of the songs, Jaane tabulated the results and shared the Top 8 in the paper. They were published in random order. However, we can tell you that Stig was definitely among the favourites, suggesting he might do very well with the jury if he nails his live performance.

The Top 8 included the following acts. They are not listed by ranking:

Are you loving Stig’s live performance? Do you think he should stick with this stripped-back version? And what do you make of the Estonian newspaper’s Top 8? Let us know in the comments box below. 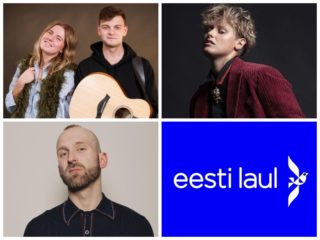 He is my favourite in EL 2018. I love his voice and it’s such a lovely song. But I also wouldn’t be sad with La Forza winning.

I must be missing something about this song because I don’t think it is a strong entry. I do think he will win in Estonia though, but at ESC I smell flop.

RTP said hey want to concentrate more on the song and the feeling around it which is why they have no LEDs and this could be really beneficial to him! This song is just about him and the emotion so Estonia really could be a contender if they send Stig to Lisbon!

give a little love #mollysterling

He‘s trying so bad to be ed sheeran, sry?

I suspect Stig has been round way longer than Ed Sheeran ?

I feel similar to M_K, who commented below. I do like the song, but there’s a “tiredness” about Stig in the way he performs live. It’s not just in the looks, it’s in the vocal phrasing as well.

Sorry Stig, I don’t want to put you down, so if you read this then please use it constructively: You know you can sing better, and you know how to “act” more interested, so please do it. Thanks, and have a great 2018. 🙂

Beautiful song, beautiful man. I could imagine this doing relatively well at ESC with the right visuals and stage design. Otherwise, the song might not be extraordinary enough to stand out. Still, keeping my fingers crossed for Stig.

Everything always looks so perfect on Estonian television… it’s quite amazing. Stig’s entry this year is a very nice one, it’s very international and has a timeless quality to it. What might be off-putting to some people is that he always has this slightly tired look on his face while he’s performing (which worked pretty well when he sang “Goodbye to Yesterday”). I think it would be easier for the people at home to connect with the song on an emotional level if he looked a little more alert. Then again, it’s just a minor observation – every artist has… Read more »