Tonight Melodifestivalen moves on to Lidköping, where a final seven acts will share the stage at the Sparbanken Lidköping Arena.

The show will air live on SVT1 from 20:00CET. Two more acts will go to the final and two will advance to the duels of Andra Chansen.

And on Thursday, we asked you who you think should win the Semi-Final and we have a resounding result.

Your favourite is returning act Lisa Ajax with 43% of all votes cast. Her ballad “Torn” has won you over.

Another returner – John Lundvik – is your second favourite. He managed 22% of all votes cast for his soul track “Too Late for Love”.

Close behind in third is Pagan Fury. The band best known for video games soundtracks won 19% of all votes cast. If this result is bared out they’ll be the first of tonight’s act to advance to Andra Chansen.

There is a big gap between third and fourth place. Anton Hagman is your fourth favourite, but he only won 6% of all votes cast.

If these results are the same tonight in Sweden that means Bishara, Arvingarna and Ann-Louise Hanson will start and end their Melodifestivalen journey in Lidköping.

Next week the competition moves on to Andra Chansen.

Six acts have already qualified for the duels.

Anna Bergendahl and Nano from Semi-Final 1, Andreas Johnson and Vlad Reiser from Semi-Final 2, and Martin Stenmarck and Rebecka Karlsson from Semi-Final 3. Acts from the same semi-final won’t duel each other, so they’ll be mixed up by the SVT production team.

In recent years, SVT has announced the pairings for the duels the same night as Semi-Final 4, so we should know more later tonight. Norway: Wiwi Jury reviews Carina Dahl with “Hold Me Down” 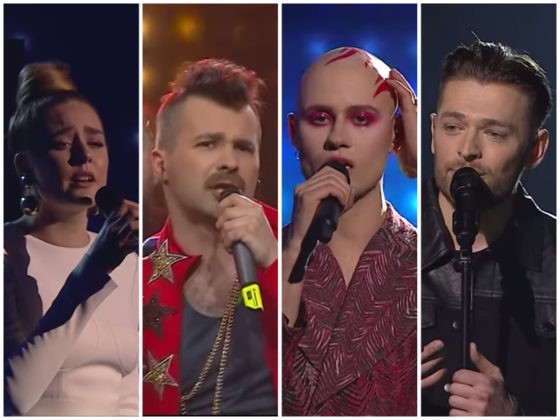 Bishara and John L was good qualifiers! I think the prode will be between john and Hanna&liamoo.

The good news of this evening is Ukraine chose RIGHT! Finally a country picks a great song! Gj MARUV!

John Lundvik has the best song this year, but I’m not sure that’s saying much. It feels like a four and a half minute song that has been cut to shreds to make it fit the three minute rule. There’s a great song in there somewhere, but it never shows its face. I don’t think we’ll be heading to Stockholm next year.

John Lundvik best song and voice in the final and a winner for me.
But I don’t understand why Stormbringer didn’t make it to the final… perfect voice and performance. And the song is amazing and could also stand out in Tel Aviv.

Amen to that!! Pagan Fury or Lisa would have made a way better choice than a kid singing about sex

Will Bjorkman the devil put Anna Bergendahl against Lisa Ajax in Andra duel? 🙂

omg that would be evil!! The two best acts of AC 🙁

That would be evil but logical, both songs are in English and female solo

Unless they both are 3rd placers… usually they pair 3rd and 4th place ranked songs against one another.

Don’t know. But either way…next week will be Game Of Thrones/Hunger Games. Another way of saying. It’s not going to be easy.

Nice that you have a good time..

I feel so sorry for Colin at this point! 🙁
Actually Sigmund is much stronger live than I expected. But my winning song is still “Love is Forever”, in spite of Leonora’s obvious nerves.

What a big disappointment this MELLO is…

The only thing I learnt in this semifinal is: John needs braces.

BTW: “Ljuset” by Eric and Sarah is wonderful! If only they could win MELFEST!

*LOL*….Miguel, living his life for disliking the Swedes. Every. Single. Week. Oh baby, you need a hug 😀
PS. GO JOHN!!! Well, not myself, but…

Really? Bishara dtf? And not Lisa or Pagan Fury? Sweden, you do confuse me sometimes!

Bishara was amazing with the voice. He lifted a standard song

After they rejected Loreen’s “Statements” I was not confused watching Melodifestivalen ever after.

Really?? Pagan Fury not in the top 5? Probably the only song I feel was robbed from a top spot this Melofest. Boo

Jon Lundwik.
That’s my choice for Sweden this year.
Unique, different, good, best of all for Eurovision.
(Though, there were better songs, like Lisa’s or Bishara’s but not for ESC)

All in all. Jon in the end.
And who knows how will it end… 😛

Let’s send John Lundvik and The Divaz with “Nobody But You 2.0”

Something “never seen” on Eurovision

Let’s not send anything then, because it was all seen in Eurovision so far 🙂

I remeber only one “divaZ” aka. gospel song and it was Israel in 2006… and that was NoT good.

Omg. If Lisa doesn’t go DTF or at least AC with that amazing performance I’m done with melodifestivalen.

So… is anyone live commenting on MelFest? Just wondering. I’m watching Dansk MGP and it is awesome so far. 🙂

Watching this live was something of a shock. Lisa Ajax literally destoys her song…she doesn´t have the voice to make it justice. I´m surprised if she qualifies for AC, to be honest. A pity…the song itself are fab, but deserves a better singer (=Loreen).

John Lundvik and Bishara seem to be certain qualifiers for the final – unless Arvingarna manage to destroy for any of them. They got the audience on their feet right away 😉

It’s sad to see people pretending that any entry in melfest this year can do well… Especially Bishara, it’s like someone accidentally forgot him from Lilla melodifestivalen and gave him a rejected snippet of Oscar zia. They should rework on the music quality of the selection

It’s sad to pretend other selections were better with songs that stand a chance. And that those countries have sent masterpieces

the fact that there isnt a strong competition doesnt make melfest stronger…..

As usual: If Sweden was some country in the balcans you would not say this.

i said it for slovenia and croatia.

“I do”should go directly to final

Lisa better be dtf, only good song in this heat..

Finally. At last! Some sense from a Wiwi poll result. This is almost identical to my 7 list. (Just switch 6th with 5th.) 🙂
The downside is, I think there might be a shock tonight. I won’t be watching, however. Denmark have called. 🙂

The fans vote crazy as usual.

Lisa and Pagan Fury for the win!

Looking forward to this!!!

I secretly want Lisa Ajax to win. The snippet was amazing. It’s been a while since we sent a ballad. And a woman..

I actually feel like Anton has a promising song , I don’t know why he’s underrated . I think Anton and John should qualify though I know that probably won’t happen like that. Torn isn’t bad but a little overrated imo.

Sorry, but her song is a total cliché ballad. Pass.

Semi-final 1 was by far the best.

It doesn’t really matter because they are all bad in one way or another. This is the most overrated pre-selection of all!

F*ck off won’t you

That was uncalled for.

And defended by the rudest people. Nice! Thank you for illustrating my points well

When will all the songs be available tonight after the semi final or after andra chansen?

After the semifinal tonight 🙂

John Lundvik all the way. The snippet is everything. I cant stop humming the chorus. Please, let this win Melodifestivalen.

I hope Lisa wins this semi

Can you make a poll who shoud win Lithuania’s selection?