As a result of the ongoing pandemic, which has disrupted everything from small weddings to major international sporting events, Italy’s Sanremo Festival has long been in doubt. Fortunately, the festival’s music director Amadeus confirmed earlier this month that it will happen in 2021. Now, Italian broadcaster Rai has gone one step further, saying that Sanremo 2021 will also have a live audience.

Sanremo 2021 will have an audience

In what Velvet Music Italia defined as “an important step in solving the issue of Sanremo 2021”, Rai director Stefano Coletta has issued a reassuring statement. According to Coletta, Rai expects that the festival will take place with little to no structural changes from last year. Velvet Music reported the situation as follows.

“Sanremo 2021 will take place, and will be done with the public present at the Ariston Theatre. The two presenters, who have always been in the foreground for an all-or-nothing organisation of the program, can therefore breathe a sigh of relief. Interviewed by the journalists present in the hall at the official presentation of Tale e Quel Show, Stefano Coletta explained how the new edition will officially air with the audience present in the studio, in the closest possible way to the historical modalities of the festival. This opens the door to a series of logistical questions.”

In terms of precautions, all spectators at the Ariston will have to take swab tests before entering the hall. They will then have to take their temperature upon entering to confirm they do not have a fever.

The festival will begin on 2 March and will end on 6 March. These dates are later than usual, but allow Rai a longer timeframe to work on the festival — and the inevitable issues that will crop up during a pandemic.

What do you think? Will Sanremo Festival go ahead as Stefano Coletta expects? Let us know in the comments section! I am so glad that they will have an audience. We ve lost so many months staying indoors, people need to be entertained and get together, of course with just some measures. Isolation creates depression.

Isolation, yes. But far worse is covidcovidcovidcovid. Everything is covid, people only talk of covid, covid is the only thing that matters, everything had to change because of covid it’s covidcovidcovid everywhere, on TV, in the streets, in the shops, covidcovidcovidcovid all day long. THEN, add to that isolation. So, yes, people desperately are in need to be entertained & reminded that ob-la-di ob-la-da life goes on. Nevertheless. 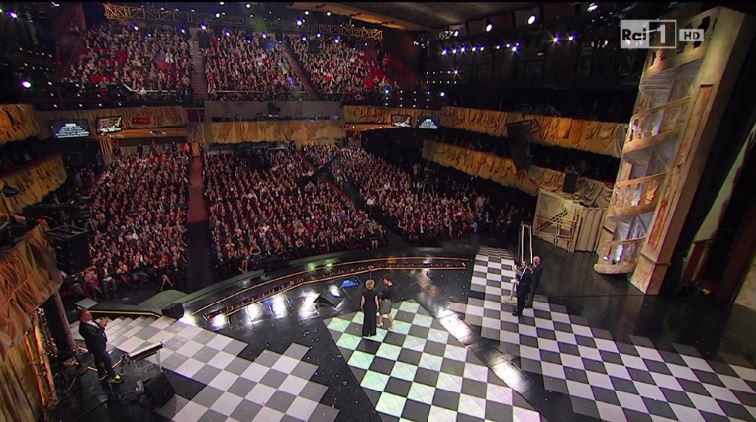 Last edited 2 years ago by sucof
1

dear EBU and whoever are in charge for Eurovision 2021, please take note on this, I am sure you can do the scenario A with tests and temperature checking.

Last edited 2 years ago by Rifki
7

Apple and oranges. The Ariston Theater has a seating capacity that is one-eighth of the capacity the whole Ahoy Arena has (which numbers 16,000+) and logistical concerns will still be there as these will all be subject to whatever guidelines the San Remo local government has provided with regards to public events with large gatherings.

I can see seats being placed apart so not everyone will surely be able to get inside.

Before 2013.. we had Eurovision with live audience seating and some of them in huge venues.
EBU just need to adapt to circumstances. They can do it. They have time to think and work.

if I understand correctly, all the seats in the theater will be filled. Those who participate as an audience will be tested for covid and will be checked by measuring the temperature. Obviously everyone will have to wear a mask

He won’t be reselected. Screen my words

Don’t be sure, on May 18th Rai director revealed in an Italian online journal that there is the possibility to have a duel bewteen the winner of Sanremo 2021 and Diodato with a new song of course

Besides, it’s possible that Sanremo will be postponed after early march and in that case the only possible logical choice would be selecting Diodato internally

In a perfect world, the winner of Sanremo Festival 2021 will announce during the press conference that they are going to perform their song as a duet with Diodato at Eurovision. Diodato is a pretty versatile artist and he’s performed with other singers before. Rearranging the winning song into a duet will take some effort but given the fact that most Sanremo songs have to be shortened for Eurovision anyway, it’s not a highly unrealistic thing to imagine, is it?

except… not all songs can really be sung as duets? this is a rather silly idea

If the requirements of the song aren’t something that lies beyond the abilities of the artist, why not? There are many different ways to perform a duet – and lots of the songs performed as duets on the fourth night of Sanremo Festival are originally only sung by one vocalist.