It took some time and some drama, but Ukrainian broadcaster Suspilne has finally revealed the full split results for Vidbir 2022 – Ukraine’s selection for Eurovision 2022.

The split results show the exact number of votes each act earned from the televote. It also reveals the order in which the three individual jury members ranked the eight contestants.

Kalush Orchestra won the Vidbir 2022 televote by a large margin

Overall runner-up of Vidbir 2022, Kalush Orchestra, won the televoting with a large margin over all the other competitors in the show. The “Stefania” performers achieved a 44.66% share of all SMS votes cast.

The ultimate winner, Alina Pash, finished second in the televote and received a considerable share too. She received a total of 27.58%.

Following the top two, there’s a notable distance down to the others. Third and fourth placed acts, Wellboy and Roxolana, each received around 7% of the televote.

Meanwhile, the jury split results reveal that the Vidbir 2022 judges did not agree with each other.

Although both Yaroslav Lodygin and Jamala gave Alina Pash their maximum points, Tina Karol only gave the “Shadows of Forgotten Ancestors” singer six points (her third place). In an interview on TV show Svitske Zhittya, the Eurovision 2006 alumna said her decision to not award Alina the top rank was motivated by the fact she saw a potential scandal erupting if Alina were to win. This scandal ultimately did manifest itself, and Alina subsequently withdrew from Eurovision 2022.

The judges also had very differing opinions on Barleben‘s “Hear My Words” and Kalush Orchestra’s “Stefania”. Both songs were awarded high points by Tina Karol and Jamala, but received low scores from Yaroslav Lodygin.

Shortly after the final, Lodygin received some stick for his statement in which he revealed he awarded Kalush Orchestra only three points (his sixth place)

On 12 February, songstress Alina Pash emerged victorious in the country’s selection show. However, within a few days, she withdrew her bid after one of her team members allegedly forged documents about her previous trip to Crimea.

As a result of the developments, Ukraine’s public broadcaster decided to offer the Vidbir 2022 runner-up – Kalush Orchestra – the opportunity to fly the flag in Turin. On Tuesday, the band accepted the offer.

What do you think about the Vidbir 2022 split results? Are you happy we finally got to see them? Let us know in the comments down below! Melodifestivalen 2022: Our first reactions to the heat 4 studio versions 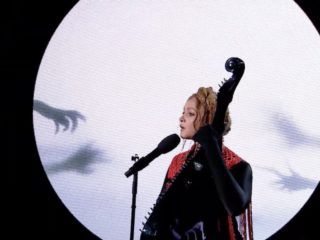 Politics aside, I think the Ukranian song is the best..up there with Poland, although the polish song is similar to Swiss song last year and Arcadia..( though better I think)

With everything happening, I so hope they can still come. Such a worthy entry and if any country needs a message of unity and peace with Europe and Australia it is Ukraine.

Ukraine stay strong, my bruised heart is with you now.

Far too few people to have in a jury. You are essentially putting the power of the decision into one person’s hands. This was not the intention of having juries involved in Eurovision decisions. So, in the end, an appropriate outcome prevailed, although I do feel sorry for Alina having to go through what she went through.

Song doesn’t deserve to win and unfair on other contestants if Ukraine wins due to a pity vote.

Already they have so many political tensions right now, the least they could’ve done is refrain from all this drama. I still think that the broadcaster could’ve gone another way about this Alina Pash controversy. Anyway, I’m happy that my favorite is going to Eurovision (although I’m concerned that something will happen)

-I’d have my vote for Alina……. -Come again? -I have decided my vote goes for Alina….. -Do you think it should be decided based upon peoples opinion and not politics? -No sir, I just said my vote will be for…. -Is that a yes or a no? -No. Alina Pash will be publicly %*#% and instead I give my vote to Kalush Orchestra that will be better because our government can have their saying in everything. -It’s not even what we’re discussing. We’re discussing whether to disqualify Alina Pash because of some reason we made up or not. -Yes, we… Read more »

Was the bulgarian socials hacked or are they changing their entry

That isn’t against the rules. I don’t know why you keep trying to find reasons that Kalysh Orchestra broke the rules. They didn’t.

Because the Ukrainian broadcaster seems not to play fair. It’s not their first disqualification. It’s all about scoring well on the “I’m a worthy Ukrainian” scoreboard. All is just politics

also how dare you say i try to find reasons to disqalify them?
do you even know me or who i am?No. Do you really think you know what my thoughts are or what i am trying to do? No. Are you inside my mind? No. Who do you think you are?
also, YOU said i ALWAYS try to find reasons for them to be disqualified. What do you mean by always? Can you mention another comment in which i said such a thing?

off topic: bulgaria is 4th in the odds
bnt made an insta post with soem lyrics of intention and a picture of kristian kostov
bookies think that it will undergo some massive revamp

Jake
Reply to  siu or sui?

That’s so bizarre that with nothing announced it’s jumped up. They would really keep the song and just change the singer and it’s arrangement to fit the new singer and all of a sudden it goes from being bottom of the odds to top 5?!?!

why are you downvoting me? another perso mentioned it too but you are always freaking downvoting me for absolutely no reason

Efthymios
Reply to  siu or sui?

It’ll take a while for the bookies to recover, I just went over to check the odds and things where a total mess, hahaha.

Relatively big country where much of the population is more interested in planning their escape to Poland than who will be representing Ukraine at ESC.

Tina Karol the only judge with sense.

“(…) the Eurovision 2006 alumna said her decision to not award Alina the top rank was motivated by the fact she saw a potential scandal erupting if Alina were to win.” – So you don’t vote for best song, but you vote for the act with the least potential for drama and scandals??? What an objective judge! That’s why I don’t like juries!

It sounded outrageous but her rationale was rather sensible, given the subsequent sh*tshow

ouf ot topic but can we have an article about eurovision bulgaria tweets? what are they teasing? are they bringing back Kristian Kostov because their song is already a flop??

and they just deleted all the tweets about intelligent music project. ANOTHER DRAMA COMING I CANT

Wow, this is like next level suspicious. They have a picture of a date (March 15th) and the silhouette of a singer. It could be a revamp, but this looks like a whole new entry. I mean, BNT has to have heard some of the criticism of their song, but is that enough to warrant a whole new entry? We’ll see…

i mentioned these legal issues long ago and people downvoted me

It certainly is strange. Also the silhouette is definitely Kristian and the date is his birthday.

As a fan of music, I love this. But as a fan of fairness I’m actively against this. But if it’s a situation where IMP intentionally withdrew and they then replaced them, I am all for this

they were promoting their entry until a few days ago…. I hope we learn the truth

And Bulgaria’s odd suddenly rose from the bottom to the top on Eurovisionworld.com.

There is nothing more on IG neither Twitter. They deleted it, it was cyber attack. IMP are preparing for Turin and yesterday they were confirmed for Eurovision in Concert.

Well, good luck to them. They will need it

The people won. Justice was served. Congratulation to KO!

Alina could have won ESC. Kalush have no chance. What a wasted opportunity.

Well yes, it is good to have all transparency on the voting. Especially since all went wrong during the live show counting the votes. Kalush Orchestra won clearly the public vote, and it is good they get the chance to go to the ESC after the unfortunate debacle with Alina.
It is also fine to see the jury members did not agree. I find it mostly worrying when the jury members give all the same points…..

Alina was my favourite, although the song is maybe too much like Jamala´s. Kalesh was my 2nd choice, so I am happy!