Ever since RuPaul’s Drag Race spawned spin-off shows in Europe, fans have long been hoping to see a Eurovision song be used for one of the programme’s well-known lip syncs. And now that wish has become a reality, with Netta’s Eurovision 2018 winning song “Toy” being featured in RuPaul’s Drag Race UK vs The World.

For those unfamiliar with the series, each episode of RuPaul’s Drag Race concludes with a lip sync between (usually) two contestants.

In a regular series, this is a ‘lip sync for your life’, with the queens fighting to stay in the competition. But in RuPaul’s Drag Race UK vs The World and other All Stars seasons, this is a lip sync between the top two queens of the week.

From here on, a spoiler warning is now in force. If you haven’t seen the episode yet, then turn back now!

Episode five of RuPaul’s Drag Race UK vs The World was predominantly not Eurovision related. The queens were tasked with writing and recording a verse for RuPaul’s song “Living My Life In London”. They each highlighted their own hometown, and with an international cast this at least gave a flavour not too dissimilar to Eurovision – which itself celebrates countries across Europe (and down under).

But the main event for Eurovision fans occurred during the ‘lip sync for the world’. The top two queens of the week – Jujubee and Mo Heart – went head-to-head against one another. Watching on from the judges panel were RuPaul, the UK’s Eurovision commentator Graham Norton, past USA Eurovision commentator Michelle Visage, and Little Mix’s Jade Thirlwall.

Within the very first notes of the lip-sync song starting, Eurovision fans will have instantly recognised “Toy”. Netta brought Israel its fourth victory at Eurovision with the song in 2018.

Mo Heart werked her dancing skills during her performance. Meanwhile, Jujubee leant more into the humorous aspects of “Toy”, flapping her arms like a chicken and doing the bird sounds.

In the end, RuPaul decided that Jujubee was the winner of this very first Eurovision lip sync on Drag Race.

NB: The below video is a cut-down version of the lip sync to “Toy”. You can watch the full thing on BBC iPlayer or WOW Presents Plus.

In the aftermath of Netta winning Eurovision with the effervescent and catchy “Toy”, the song became a go-to track for drag queens to perform and bring the party spirit.

Drag Race alum Shangela added “Toy” to her set for the Werq The World Tour in 2018.

And went visiting Tel Aviv, Manila Luzon naturally had to include “Toy” as part of her repertoire.

Were you excited to see Netta’s “Toy” featured on RuPaul’s Drag Race UK vs The World? What did you make of Jujubee and Mo Heart’s performance? Let us know in the comments below. Lights off! We Are Domi join in the fun at London Eurovision Party 2022 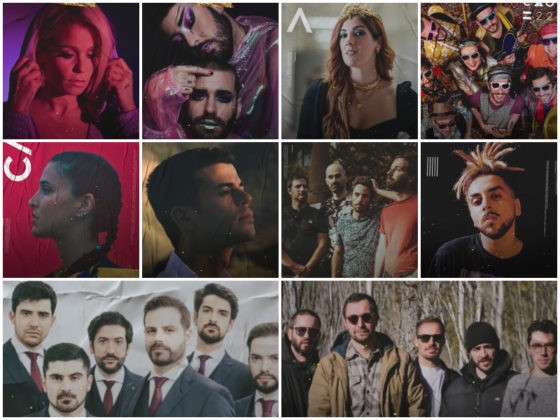 Poll: Who should qualify from semi-final one of Portugal’s Festival da Canção 2022?

And I wonder why Jujubee is in top 4. She is so MEH in this version of drag race.

I got bored of this song and started believing it wasn’t a deserving winner but hearing again after so long reminds me why it won… even if it was accompanied by a lacklustre lipsync performance.

The Drag Queens are taking over Eurovision. It needs to stop.

Given how much RuPaul loves Eurovision, I think this was overdue. Still, it was a nice performance 🙂

Eurovision will become full lip sync in yhe following years, so let’s get used to it.

potaxio
Reply to  Im so fab

The thought of that actually terrifies me

Please learn to separate Eurovision from Drag Race. Not all fans of the former are fans of the latter.

I don’t know why that should mean Wiwi are never allowed to mention it.

It’s related to Eurovision so they report it. If you don’t like it keep scrolling.

I like both but whatever. This one is fine because it has something to do with ESC at least. It’s not like series of articles of some random group pushed by SOMEONE which couldn’t decide whether they want to do ESC or not despite knowing absolute nothing about it. These articles sounded more like their promotion. This one isn’t different than articles about Dancing with the Stars

So you just posted this article because they used one song of Eurovision in this show??? Sorry, but why? Last week I watched a TV show on German TV where they sung like 10 Eurovision Songs in it. Why not 2 articles about that show as well???

Because RDR is very popular. I don’t know of any German TV show that’s famous worldwide.

RPDR isn’t a local show on German TV. It’s a massivly popular show with millions of international viewers, 11 emmys and 10 spinoffs in 10 countries.

Another off topic comment from me but I heard that Cyprus media stated that Andromachi will represent them in Eurovision 2022. Composers of the song will be Alex P and Giorgos Papadopoulos. They said that the song will have an ethnic character. Also, Greece will release their song on March 10th.

Last edited 10 months ago by Francis
7

Not using “Ooh Aah… Just a Little Bit” in the Ruruvision episode was a missed oportunity. I hope they use a Eurovision song in the upcoming season of Drag Race España, “Bandido” or “Dime” would work very well.

I love RuPaul’s drag race, and was really excited they were doing the lip sync battle to ‘Toy’, but I was kind of disappointed by their performance :-\

Could have been a lot better but I thought they did real nice.

I was SHOOK when I heard this is the song Juju and Mo will lip-sync for the win for! So awesome!

Loved toy when it was first released but the song has not aged well for me. I’m now in the Fuego should have won camp.

Should’ve would’ve, it was years ago already, get over it