In part one of our interview, the boys sounded off on their Eurovision stage show and what they think about Slovakia’s TWiiNS. In part two, they let loose about Germany’s Lena, the pressure to win and what they call “Jedward hype.”

How are you guys different from the other contestants competing this year?

Edward: Me and John we have, like, a base, okay. So if we did well at Eurovision we’d already have loads to offer the fans who voted for us. It’s not like we’d win and just fade away. We’d build on it.

John: And another point is our name is just Jedward. It’s not some hard difficult name to understand like La lalalala. Or like something really difficult like some cuckoo name.

Edward: We translated “Lipstick” into French. And we have lots of songs. Like “Bad Behavior” and “Distortion.”

John: We have like loads of other new songs that we’ve recorded. Brand new original songs that are even better than “Lipstick.”

Edward: Me and John always give a really big performance. That’s what our fans like about us. They like that me and John…some people performing on stage are just singing the lyrics. But me and John go beyond it. They aren’t really getting into it.

You are performing last in the second-semi final. What do you think about that?

John: I think it’s such a big deal performing last. It means it’s a big performance. It’s a like a really, really good performance to end the night. It’s amazing. It’s fate that we were picked last. It’s really cool. Really excited about doing it. And I think about it like we’re performing and the minute after we’re done performing the voting lines open and we want everyone to vote for us. Edward: I think it’ll keep all the viewers like wanting to watch until the end because usually when we’re on programs our fans want to see us. They watch the whole thing to see Jedward. We’re going to be making a huge impact on like everyone in different countries because we’re really nice to them all because we’re cool.

John: I think people are going to be like, “Who are these guys with big hair?” Because normally people are, like, standing there singing and, like, maybe a little bit of dancing, but we’re just totally goofy.

Edward: Me and John bring that whole hype. There are plenty of other artists who have songs, but they wouldn’t have 100 people waiting outside their hotel. Or crazy fans. We have that whole crazy mania of “Jedward! Jedward!”

Edward: People recognize us when we’re on holiday. We went to France for like four days…

John: We went to Los Angeles and Orlando, and everyone in New York would stop us and say we looked so cool.

Edward: The reason people know us in other countries are because these online bloggers make videos about us.

Edward: And we got a new parrot and Perez wanted us to call him Perez so we did and he tweeted it.

Do you like any of the other songs this year?

Edward: I really like Lena’s song “Taken By a Stranger” because you wouldn’t expect that from her. Her song last year was “Satellite,” and it’s so contrasting. But I also like Norway. “Haba Haba”… hujaza kibaba. I also like that song by Sweden, “Popular.” 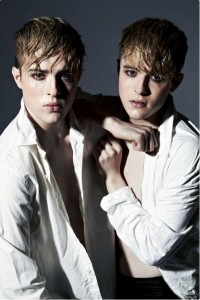 Do you feel pressure to win?

Edward: I just want to represent. A lot of people go into it, like, “Oh my god, bloc voting!” We don’t care about that. We don’t mind. We’re just going to do an amazing performance. People make excuses but we’re just going to go there.

John: Like all you can do is go in there and do the biggest performance you can. Everyone in the competition is good after they’re there so you just have to go out there and do something different.

Edward: The thing is when me and John say it’s different, it is. Everyone else is going to say, “Oh my god! I gave a performance of a lifetime” but me and John actually are. We’re not giving ourselves false hope. We know we actually can do it. We have the willpower to keep going. Not just the performance, but the whole week. Interviews, the red carpet, we’ll make everything memorable.

Some folks booed when you won in Ireland. What do you make of that?

Edward: I think everyone was screaming, but the people booing were the other people’s families. You always have people in the audience who clap and the people who don’t do anything. So the people who booed, at least they made an effort. The boo and the woo turns into woo-hoo!

Johnny Logan said that you guys were an embarrassment, and that Ireland should be ashamed it chose you. What do you make of that?

John: Me and Edward, okay, we’re totally cool. Eurovision has completely changed. It’s gone from being this ballad contest to this modern competition. It’s called Eurovision song contest and we have a really, really good song. People who watch it are mainly young, funky, and cool, and they want to see something new, something different, something fresh, and something they can be a fan of. And that’s what we’re bringing to Eurovision.

Edward: Johnny Logan, okay, he’s cool, okay, but he’s like “I wish I could do it this year.”

Edward: Me and John know what it’s like to be fans. We are crazy fans of Britney Spears and Backstreet Boys. We waited outside of hotels just like our fans did, so we give our fans everything we gave them.

How long does it take you to do your hair?

Edward: The thing with me and John is when we go on stage it has to last for 2.5 hours. But right now it’s not like rock solid.

John: There are so many ways of doing it. Now it’s puffy because we did it really quick. But for a concert it’s rock solid because it has to last for a two hour show. Fans are always touching our hair and going crazy. To be successful you’ve got to have cool hair. What do you parents think of all this?

Edward: Our parents are always trying to give us advice, but they’ve never been famous. They’re just trying to tell us what parents would tell a normal child. They just all want tickets to the show. They’re like are we going to get tickets?

Why do you think Ireland hasn’t done well at Eurovision in recent years?

John: The reason Ireland hasn’t won Eurovision recently is because..

Edward:…John and I were to young to enter.

John:…and because Eurovision has changed. It’s not about having a boring song. It’s about having an upbeat, out-there song like the Black Eyed Peas or Lady Gaga would do.

Is there anything you want Europe to know about Ireland?

John: We want people in Europe to realize that Jedward live in Ireland, and that we do have cool songs.

John: And we want everyone in Europe to know that Ireland is really sunny.

Since winning you’ve been busy preparing. Are you exhausted?

John: Like we’re going on our tour starting in two weeks so we’re always busy. Or fans know how busy we are and all the things we do. Our fans know how we do like so much stuff it’s crazy. We’ve done 13 endorsements this year. We did Nintendo adverts. Eurovison’s Next Top Male Model: Vote Now in the Final!

these two men are the most humble boys i have ever met. they are so funny and are proud of their campness and gayness its great for all the gay teenagers of Europe to have them to look up to