In June 2003 “Fly On The Wings Of Love” stormed into the music charts all across Europe, reaching the top 5 in the U.K. and number 1 in Ireland. You’re probably saying, “Wait…the Olsen Brothers won Eurovision 13 years ago not 10!” That’s true. The song that took Europe by storm wasn’t the original, but rather a cover version performed by XTM and DJ Chucky.

To mark the 10-year anniversary of their success, I’ve compiled 10 of the most fantastically random Eurovision covers/samples/remixes ever. Prepare to be surprised and bemused. Warning: waves of nostalgia may overwhelm you.

I have to start the list with “Fly On The Wings Of Love”, obviously. It’s hard to explain how it became one of the biggest songs of Summer 03. To a listener in 2013 it sounds dated when compared to other hits from the same time (I’m thinking of Beyoncé’s “Crazy In Love”). But this was released in the era before smart phones, when people had to make do with phones which only allowed you to call, text, play Snake, or collect polyphonic ringtones. And mark my word, if you were in school back then and didn’t have a phone full of polyphonic tones you just weren’t cool. It was inevitable that a song that sounded like a ringtone to begin with was going to be huge.

Dana and Sinead O’Connor have a lot in common. They both had massive hits very early in their careers. They both failed to maintain their early success. And they both like to speak their minds, regardless of what controversy they might stir. But that’s where the similarities end. Whereas Dana became a presenter on evangelical television networks over in America, Sinead went on chat shows ripping up pictures of the pope. Given that, you’d expect Sinead would do her best to subvert Dana’s biggest hit. Instead, she gave us this rather nice, if not particularly exciting, duet with Terry Hall.

While this isn’t a cover as such, I still think it’s deserving of a place on the list. The melody of “Puppet On A String” is sampled throughout Lily Allen’s ode to her little brother Alfie, who in a cheeky nod to Sandie Shaw’s original song, is represented by a puppet in the official video. However, while Sandie’s puppet was busy with merry-go-rounds and swings, Lily’s is seen smoking weed and … ermmm… pleasuring himself.

David Bowie is well known for his eccentric performances and extravagant costumes, so it’s hardly a shock to learn that he has covered a Eurovision song. But the only thing is that he decided to cover “Volare”—a favourite of old crooners like Bing Crosby. The result is rather pedestrian in comparison to his usual material and just slightly disappointing.

I always thought it would be impossible to do a cover of a Eurovision song that is more bizarre than any Eurovision song ever! I was wrong. I could try and describe this cover by the late actress Farrah Fawcett, but I think it’s better you listen yourself. But be warned: it is very likely to make you feel hot under the collar, regardless of your sexual preference. Either that or you’ll get a fit of the giggles.

Basshunter had a handful of hits in the mid 00’s, including “Now You’re Gone” and “All I Ever Wanted”. Then the naked pictures leaked online and an appearance on Celebrity Big Brother ensued. By the time you’d counted “Eins, zwei, drei” he’d fallen into obscurity. But before he disappeared he recorded this remix of “Dancing Lasha Tumbai”. In the process he drained the song of all it’s fun and vibrancy. Worse poor Verka sounds like a fly, and a very annoying one at that.

Julie Andrews is best known for playing two famously perky and cheerful singing nannys, namely Mary Poppins and Maria Von Trap. But in between all the singing and dancing amongst chimney tops and mountains she found time to record her own version of “Tom Pillibi”. Needless to say it sounds like it’s been sung by a perky nanny.

“Waterloo” is constantly named by experts as one of the best Eurovision songs of all time, so you’d expect that there would be a lot of really good interpretations out there. You’d be wrong. Alarmingly, this version by the cast of the Mama Mia movie is probably the best version there is. Unfortunately, the only good thing I can say about it is that if you are watching Mama Mia and this comes on it means the film is over (although you still have to endure the the weird cackling at the very end of the song).

Before Abba, Agnetha was a successful solo artist in her own right. Here she gives a beautiful rendition of “Un Jour, Un Enfant”, which I think is a million times better than the original version, which, let’s be honest, is a bit overwrought. I would almost say that this is the greatest Eurovision cover ever, but that award would have to go to the final song on the list.

Arcade Fire are probably one of the last acts you could ever imagine covering a Eurovision song. They’re beloved by critics, award shows and indie lovers, but I’ve always found them a bit dull. Then I heard this cover and, well, everything changed. I had Arcade Fire on my mind for days with “Poupée De Cire, Poupée De Son” on a constant loop. I now have my fingers firmly crossed that they follow in the footsteps of fellow Canadian Celine Dion and take part in the contest themselves.

So what do you guys think? What covers/samples/remixes have I left out? Let us know in the comments below. And click here to see some of the Eurovision covers we’ve covered previously. 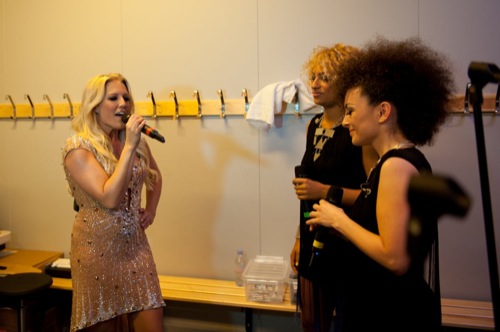 I have to admit. Mamma Mia is one of my favorite movies EVER, because it had “Waterloo” in the end credits!!!

They are the most awesome…just saying

@ Tiggeh I know it’s crazy the amount of euro-covers out there! I had some of your suggestions on the list originally but they didn’t make the cut in the end. I’m deffo going to have to do a few more lists, it gets a bit addictive youtubing all the different interpretations. And The Wurzels will be at the top of the next one for sure!!! 😉 lol

Other classics include Kenickie – Save your kisses for me, Bananarama – Waterloo, Guildo Horn & die Orthopädischen Strümpfe – Ein Lied kann eine Brücke sein, Saint Etienne – La La La, Dean Martin – Volare and of course Texas Lightning’s “b-side” to No No Never – Waterloo. I know there are more out there including Swedish Hitz go Metal’s Euphoria (again, awesome) but that would just me me plugging more covers lol

@Tiggeh Good find. I hadn’t heard that one. Perhaps Padraig can include it on a future list. I love this post so much!

I can’t believe you missed this gem