Here’s the main things she had to say:

So would you like to conduct the interview in Spanish?

Emm, yeah. I can do. I don’t understand a word in Spanish. And I can say hello.

So we should tell people that’s not your song [the host, Brendan O’Connor, was referring to Conchita’s opening performance of “That’s What I Am”] for the Eurovision. You came second in the [Austrian] song contest?

I came second in 2012. Second! And well, we gonna, we have, hopefully, a better song than this one. But I love this one as well.

I can’t help noticing your beard?

Oh yeah! It’s my beard, yeah. You know all the girls in Colombia have beards [Audience laugh]. No they don’t!

You know the thing is, why I created this stage persona, emm, I think everybody would agree on that, if emm, when I say being a teenager is a very tough time. So, the same with me and I was always, like, more like the outsider, you know, and like the crazy bird. And I always tried to fit in, and I changed myself in every, every way you can imagine. And …

And this, we’re talking here about Tom Neuwirth growing up in a small village in Austria?

I always say I’m a working queen and a very lazy boy at home. Emm, well yeah, and I just tried to fit in, but this never really worked out. So, at the end of the day I decided I deserve a fabulous life and just be myself.

So you decided just not to fit in at all.

No! Not at all. And this is very, very comfortable for me.

Is Conchita just for the stage?

I will stay in that [Conchita regalia] because it takes some time to get everything fixed. So, I enjoy being Conchita. But I also like, you know the lazy Tom at home.

Is Conchita happier in her skin than Tom was?

Yeah, you know the thing is, I came into show business in 2007 as Tom. And I don’t really, you know this didn’t work out that well for me because I didn’t understand that people were coming to me in my private time. So, I created this, not just because of this, I created this persona because nobody recognises me in the underground or, when I’m, you know, private. And I really enjoy that. Because I can say things, and it’s not me in the end of the day.

There’s a message there as well?

There is. As I mentioned, you know, I struggled with discrimination as far as I can remember. And I decided to create this bearded lady as a statement to just be yourself. And you can look whatever you want and you can dress however you like. Because it’s not about where you’re from, the colour of your skin, or the way you look. It’s just about you. It’s just about your character and I think it’s such an important thing. Especially now a days.

How have the Austrians taken to the fact that Conchita will be representing them in the Eurovision?

Some of them were happy, and some of them, you know … I knew that it was going to be like that. Because the very first day I went on the stage in 2011, I was in a casting show, I knew back then that there would be people who like it and some people don’t really.

Why? What’s their problem with it?

I don’t understand it, because it’s [the beard] is just 2% of the whole body, you know, it’s just a little facial hair.

So far no clips of the interview have been uploaded to Youtube, but hopefully we can update this post soon. Meanwhile, the full show is available to watch on the RTÉ Player for the next 21 days, and the segment with Conchita begins around the 23 minute mark.

You can see the full interview in the clip below. 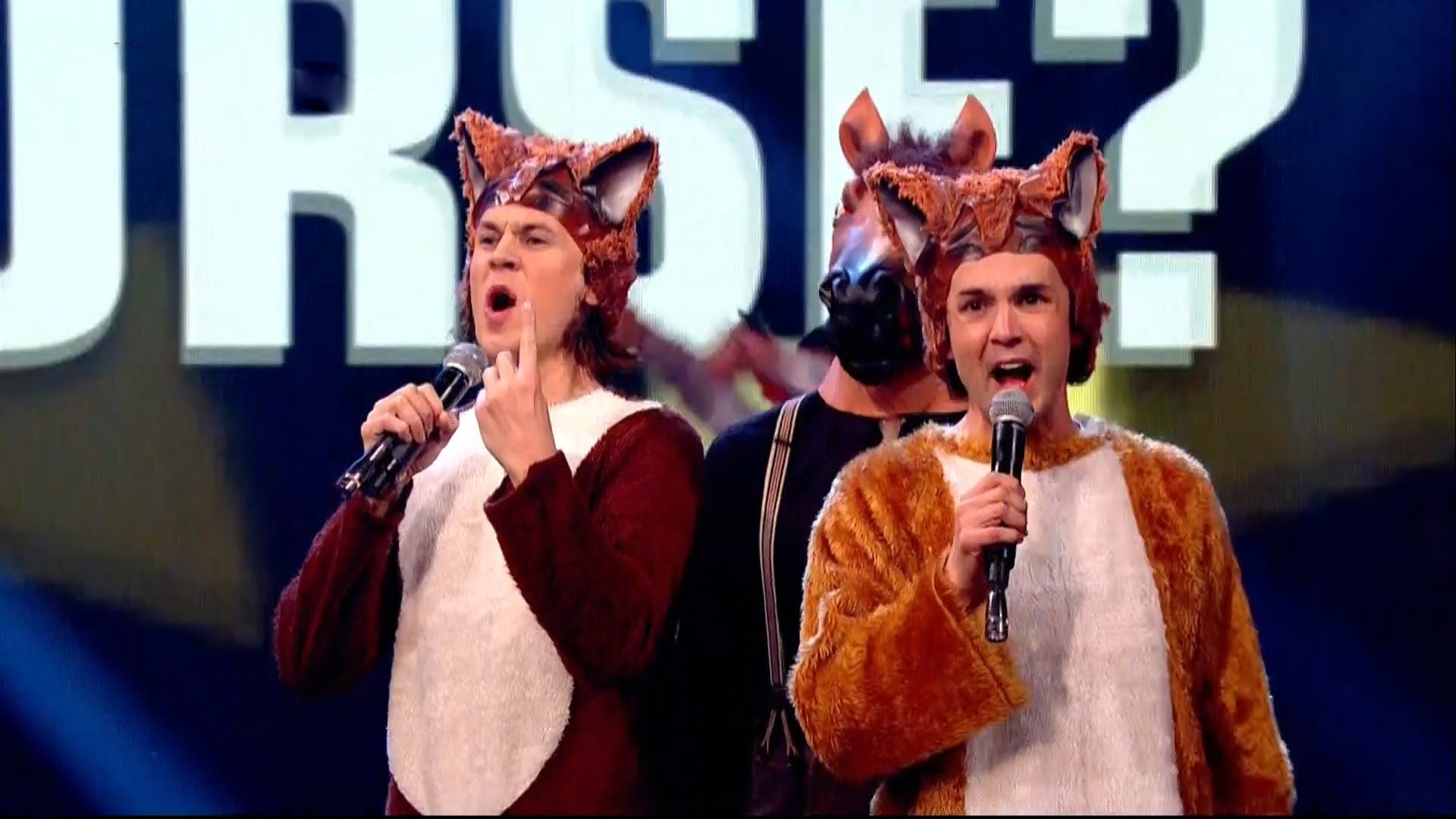 Let’s remove the person/ persona…….. Bond type song but what a voice! Deserves the win……….

LOLL yeah, was rocking the denim. In 10 years, Conchita won’t even be a big deal 😀 Though I guess it will be remembered as a big deal at the time.

@Arianna, yeah, I agree with you on that, including on Armenia. Gor’s vocals were pretty great. I even liked the song prior to the contest. But the staging was just… well, has he bought new clothes since 1994?

@Alex, I think some ppl are blinded by their own opinion sometimes :C I’m guilty cause when Armenia qualified, all I did was sulk & focused only on the fact that I they were so dead boring & yawnworthy. That sort of rock music isn’t to my taste. Then after the contest somebody said “his vocals were excellent” so I listened better & found that they were right, Gor’s voice did indeed rock.. just an example, I guess. It took awhile for me to see, haha. or hear rather.

To Charles: That “just might” comment is rather condescending and completely unwarranted – if you’re talking about acts being douchey, then at least be respectful yourself. Novelty acts and quirky acts have a long history in Eurovision. (Remember the song “Euro-Vision”?) One could look at ABBA’s Waterloo as being novelty music, yet it is one of the most celebrated acts in the history of the contest. The fact that somebody wants to be quirky and strange doesn’t make them any lesser than others, and doesn’t render their performance any less relevant than those of other acts. Some people will vote… Read more »

@sqfan Transgender is a guy or girl who feels comfortable in femininity or masculinity (like dress, mannerisms etc.) Transexual is somebody who is like that too, but undergoes the sex change operations I think transgenders can do the sex change too, but transexuals are identified that way cause they have the physical issue with their parts, while with transgender, it’s a mental thing. I think.. if that’s wrong some1 correct me ok Soo Tom is like a temporary transgender I guess? lol Since he crosses over between himself and his made up character. She’s pretty funny though. I enjoyed the… Read more »

@Alex: Let me try to sum it up for you in a way that you might understand … just might … Quality is far superior than popularity in music… Some people have talent others don’t … yet they manage to get far more popularity because … well God knows why .. maybe people drank too much or something. I don’t let myself be fooled by novelty acts or desperate needs of fame and attention in the shape of music. Finally: I’m no longer a teen … and Eurovision is an old lady …. so . you do the math if… Read more »

Dude, you know well that Dana won the whole contest her first time around. There was a lot more there than just seeking the attention of the audience (and the fact that she’s transgender does not automatically mean she is begging for attention!). Her second time around, she ought to have made the final, in my opinion. I certainly would’ve taken her entry (or nearly any other) over Hotel FM’s generic song. Besides, why can’t you just have -fun- for once with an entry? 🙂 Looking at all your comments, it seems like the instant any song has something quirky… Read more »

@Padraig Jude: Has any oficial austrian song for 2014 been released? Nothing … That was what I was asking for. So what am I supposed to judge here anyway? The guy sings nice, bla bla bla … but I cannot take his character seriously therefore I do not see a seriously credible musician in him … much less when bearing a female figure and wearing a beard is what define him according to his own words and wishes. Respect that but that is not music to me … So are you gonna, using my words, constantly try to proove me… Read more »

@Charles Have you actually looked at the performance? The show is available to view worldwide, so I’d highly recommend you take a look. And if you’ve got a properly functioning pair of ears you should be pleasantly surprised. Or are you, to use your own analogy, constantly a fool? http://www.rte.ie/player/ie/show/10223511/

@ Stephen:Transgender, homosexual, character ,,, whatever … let’s put it this way: fool us once, shame on you; fool us us twice, shame on us; fool us constantly … I ain’t got no time for that. This is a music contest and I expect music and some artistic professionalism to come up … if sexual issues are at the top of that? Shame on everybody … Still don’t get what I mean?

Charles, Dana isn’t gay, so not sure what you mean. Dana is transgender, Conchita is a character, nothing more.

It’s “Colombia” not “Columbia” and “Colombian” no “Columbian”.

And the promo starts in a big way …. going to Irelad … though the song is still yet to be released … but the gay agenda is the centrepoint of everything. It worked for Dana back in 1998 …. who says it can’t work for Tom. I just wish the song to be amazing and not just another “i’m gay, i’m gonna throw my gayness on your face whether u approve it or not and the whole world should be gay too” sort of message. It’s boring at this stage … heard that many times before.