If Eurofestival news Italy has it right, then San Remo should not act as the selection process to choose Italy’s Eurovision contestant, as it has done for the past three years. Ciao amore!

Speculation is growing that Italians might turn their back on Sanremo and internally select Emma Marrone instead. Emma is a pop/rock artist who rose to fame after winning Sanremo 2012 with her song ‘Non è l’inferno’. Before that she competed in Sanremo 2011 with the group Modà and their song ‘Arriverà’, achieving second place in the ‘Big artist’ category.

One interesting fact is that none of the singers in the Amici di Maria De Filippi show, of which Emma is an artistic director, will not present in Sanremo 2014. That’s the first time that has happened since 2008. Well, if you exclude 2011.

If she’s going to be chosen this year, then she will enjoy the same powerful fan boost as Marco Mengoni did in 2013. As she said herself, she prefers to be big in Italy.

What do you guys think of our Emma dilemma? Is Copenhagen la mia città she’s talking about? 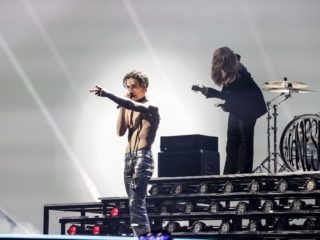 Unquestionably believe that whicdh you stated. Your favorite justification appeared to
be on the internet the easiest thing to be aware of.
Isay to you, I certainly get annoyesd while people consider worries that they plainly do nott know about.
You maznaged too hit the nail upon the top and also defined out the whole thing without having
side effect , people ciuld take a signal. Will likely bee back to get more.

Wouldn’t it be crazy if she did go to Copenhagen, and win? I mean we already have the late 90s pattern (Dana Intl. taking part, the next year Sweden wins in the far east of Europe, the next year Denmark wins in Sweden), but imagine if 50 years repeated itself again, and Italy sent a female solo artist to Copenhagen only to take back the Grand Prix! Let’s just hope that if it does happen, they don’t get Toto and Gigliola to host again!