The Georgian selection for Eurovision 2015 is just a few days away. Our Georgia correspondent Rezo Mamsikashvili recently caught up with finalist Eteri Beriashvili. Eteri tells Rezo about the message of her song “If Someone” and much more.

Hello Eteri. Congratulations on making the top 5 in Georgia. How do you feel?

Thank you! I’m feeling very good! I am glad that my — or rather Spanish composers Rafael Artesero and José Juan Santana Rodríguez’s — song hit the final qualifying round. I’ll be happy if I will represent my country at the Eurovision Song Contest.

You are Georgian but have spent a lot of time in Russia. Could you tell us a bit about your background?

I was born in Kvareli. I went on to graduate from music school with a specialty in the violin. Among other things, I played bass guitar and sang in a children’s vocal-instrumental ensemble. I was raised in a family of physicians, and graduated from the Moscow Medical Academy. I also completed a course at the Moscow Estrade and Jazz College, in the faculty of vocals. I went on to participate in a number of groups including “Cool&Jazzy” and “A’cappella Express”. In 2013, I decided to participate in the Russian edition of “The Voice”. On May 27, 2014 I performed in the Georgian Diaspora concert, which was held in the Rustaveli Theatre. Now I will continue my work in Russia and Moscow on the pop and jazz scene and participate in interesting projects.

Could you tell us a bit about your song?

This song encourages everyone to unite and to fight against injustice and evil. How many wars, and how much suffering and injustice must we endure to speak out and come together? This is the approximate content of my song.

Your song discusses the idea of believing in a kind God when there is so much cruelty in the world. Is this a struggle you face?

Yes! If we don’t prevent disaster and cruelty, no one will do it for us! People and the general happiness of mankind is in his hands. We must summon the strength to fight against injustice and poverty.

We really loved your dress during the song presentation. It reminded us a little of Severus Snape from Harry Potter! Does the dress relate to the song?

Thank you! The dress is not in any way related to Harry Potter. This dress was sewn by a Russian designer, specifically for participation in the Eurovision qualifying round. I like it very much and I feel comfortable when I am wearing it.

Competing on “The Voice of Russia” is a huge accomplishment. What did you gain from the experience?

”The Voice” is very strong project. Russia’s First Channel has a fairly large audience, so the appearance of this competition took up a lot of space in my head! I am glad that I and the Russian composer Alexander Losev worked jointly on the project “Beriashvili-Losev Group” that gained a great popularity after ”The Voice”. We visited almost all of the festivals. I don’t forget that this project was in the Georgian language. The Georgian texts’s songwriter is my sister Qetevan Beriashvili.

If you could duet with any famous Eurovision artist, who would it be?

I like a lot of singers from Eurovision. I particularly remember the Icelandic singer Yohana who sang the most beautiful song “Is It True?”, which was partly written by the Georgian composer Tinatin Japaridze. I’d also sing in duet with a Serbian winner Marija Serifovic. I have great respect for their participants, who are using their national culture to win the Eurovision Song Contest!

Who is your favorite Eurovision contestant from Georgia?

I’ll never forget Sopho Khalvashi’s performance. Not because she was the first representive of Georgia in this contest, but because she is a very strong singer, and a really talented individual. You know, when Georgian singers perform at the Eurovision Song Contest or at any competition, they give very original and interesting performances. We are a very musical nation and we are committed to surprising the audience!

What’s your favourite Eurovision song from all of ESC history?

You have already listened to the other songs. Do you have any favourites and who do you see as your biggest competitor?

All the contestants have a chance! Our young people are very talented finalists. My favourite is band ”Niutone”. I liked their style and I’ll be happy if they will represent Georgia at the Eurovision Song Contest! 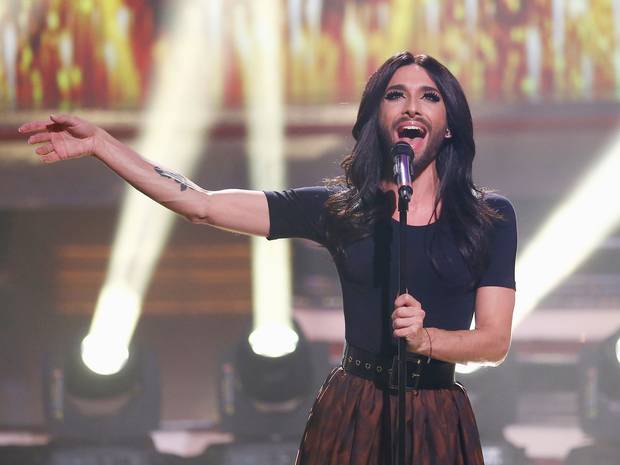 Conchita in Hollywood: I am not afraid of Putin or terrorists PS I love her song

Lol on the Harry Potter question. So true!!!