Junior Eurovision is almost upon us. In less than one week, thousands will cram into Sofia’s Arena Armeec to witness the 2015 event, with millions more watching from home. But as we wait to #discover Vincenzo Cantiello’s successor, we’re stepping back in time to the very first contest. On 15 November 2003, 16 countries sang in Copenhagen, all hoping to become the inaugural winner of the Eurovision spin-off. The result is history – Croatia won – but what about the young contestants? What happened to them after the closing credits rolled? We’ve decided to channel our inner Sherlock Holmes and do some sleuthing. The results are below. He’s JESC’s first ever winner, but that doesn’t mean Dino’s a mini-Lys Assia. Eurovision’s grande dame would happily churn out chansons forevermore, but at just 23 Dino has purged all traces of pop from his life. He’s currently the frontman of the Zagreb based heavy metal band M.U.D. On Facebook, he promises that their new album will “be Black Label meets Alice in Chains meets Van Halen.” Make of that what you will. If you want a taste of his music check out “Walk On The Other Side”. He returned to Junior Eurovision in 2005, albeit to cheer on his sister Lorena.

After Junior Eurovision, Sergio joined up with a number of other contestants from the Spanish national final to form the popgroup 3+2. Between 2004 and 2007 they released four albums, DVDs and undertook several tours. Things seem to have quietened down musically for Sergio since then. His Facebook page – where he goes by his full name Sergio Jesús García Gil – lists him as a musician/band, but there doesn’t seem to be any new releases to speak of. Unlike Dino, he embraces his tween-pop past, and regularly posts about 3+2 along with occasional reunion pics. It takes something special to get the UK onto the left-hand side of a Eurovision scoreboard, let alone the top three. But despite some initial public appearances, Tom’s music career has yet to hit the mainstream. In 2007 he auditioned for The X Factor but fell foul of the age rules. Reports suggest that he then moved to Stockholm. And that’s where everything dries up. A trawl through social media throws up nothing, save that there are a lot of Tom Morleys in the world. If y’all have any leads let us know. P.S. He’s not to be confused with the similarly named English singer Thom Morley, who is two years his senior. Volha wasn’t just Belarus’ first JESC act. She was Belarus’ first ever representative in any Eurovision contest, full stop! The singing pioneer hasn’t done too badly for herself since. She’s presented kids tv shows, collaborated with djs and become a painter. Most recently she was a VIP guest at Odessa fashion week. The 22 year old is very active on VK, where you can listen to some of her tracks. Regular readers won’t need much introduction to Anne. She was the fan favourite to represent Denmark at Eurovision 2015, comfortably winning the televote in the Dansk Melodi Grand Prix final. However, the jury snubbed her “Suitcase” in favour of Anti Social Media, leaving Anne fuming. Outside the Euro-sphere, Anne has enjoyed some chart success, most notably with “Bag Skyerne”. Her newest release is the rather saucily titled “Booty Call” with Emil Stabel. Brothers Jonas and Niels Meukens and Thomas and Philip Valkiers continued with the group until 2009. Their first album was certified gold and they recorded theme tunes for Garfield and Ice Age: The Meltdown. Lead singer Jonas (pictured) now fronts the indie band Get Off My Shoes, while Niels and Thomas went on to play with The Crackups. At the time of JESC, Sarah was already living in the UK and studying at the world famous Sylvia Young Theatre School – Eurovision stars Jade Ewen, Frances Ruffelle, Lee Ryan and Samantha Womack are all past pupils. While still at school, she secured bit parts in three Harry Potter films and was part of a group recording on the soundtrack for the first Narnia movie. However, her stage school days are behind her and as of 2014 you’re most likely to hear her spinning hip hop tunes on London’s Bang Radio. His smile may not have changed, but Nicolas certainly has. In the intervening years he’s left the music industry completely to become a serial entrepreneur. Now based in Edinburgh, Scotland and going by Nikos, the 20 year old has already created three software development companies. According to his Linkedin bio, he wants to change the way people use the internet. Dzintars continued to enter various tv talent shows in Latvia, as well as releasing new music. However, by 2014 he felt that opportunities in the country were limited and moved to St. Petersburg in Russia. There he hopes to improve his Russian and develop his music further. Aside from singing, he’s also branched out into mixed martial arts – the extreme combat sport with elements of wrestling, boxing and various martial arts. Born Andrei Mihai Cernea, Bubu has gone on to have quite an eclectic career post Junior Eurovision. He starred in the kids tv show Pariu cu viata, which ran for four seasons between 2011 and 2013. He’s also a member of Lala Band, a 12-piece pop rock group created on television. He graduated from college in September, and of course he’s still drumming. Roel Felius entertains the masses to this day. After Copenhagen he toured with Narnia the Musical and since 2008 he’s worked as an entertainer in Disney and Universal theme parks in Paris, Singapore and Japan. He regularly uploads covers to his YouTube and SoundCloud accounts. His most popular is a cover of Frozen’s “Let It Go”.

19 points with “Ti ne me poznavas” Many of you will be familiar with one half of the duo, Viktorija Loba. Like Anne, she too tried to represent her country at Eurovision 2015. Her entry “Edna edinstvena” finished seventh in Macedonia’s Skopje Fest, well behind the winner Daniel Kajmakoski. Prior to going solo, she was a member of a duo called Taboo. Initially, Marija Arsovska was also active in music, and even replaced Viktorija in Taboo. However, she’s fallen off the radar since the group disbanded. Y’all are probably very familiar with Joakim Harestad’s work post JESC. You just don’t realise it. For rather than singing, Joakim now spends much of his time songwriting. And he’s had some success. He was involved with the Melodi Grand Prix 2014 entry “Hele verden” and in 2013 he co-wrote Sweden’s Eurovision entry, Robin Stjernberg’s “You”. His partner Charlot Daysh continued to sing, releasing an eponymous solo album aged 12. However, these days she seems more intent on breaking into the worlds of acting and tv presenting.

Just like Sarah and Nicolas, Theodora also moved to the UK, studying music in Birmingham. You’d never guess from her JESC performance, but she’s now a fully fledged soprano. According to her Facebook page she’s currently performing to the works of Handel and Mozart in Hungary. Her repertoire also includes traditional Greek folk songs. 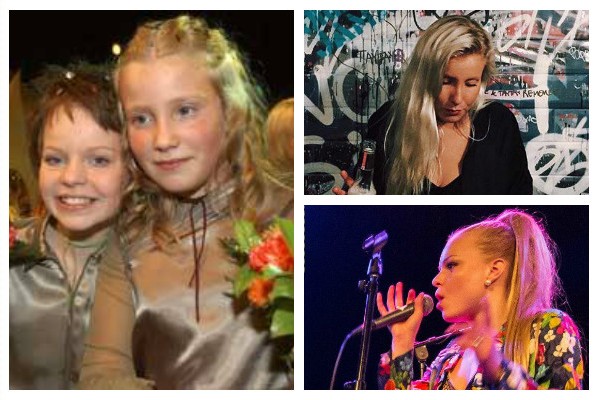 Unlike some of their successors (*cough* Molly Sandén), this Swedish pair have yet to make it big. Julia Urbán took a break from music completely, telling ESCKaz she needed time to figure things out. Rebecca Laakso auditioned for Idol in 2010, but failed to make it to the live shows. She continues to perform, and recently featured on BEAT FUNKTION’s “Where’s The Sunshine?”.

3 points with “Cos mnie nosi” Thanks to the introduction of the automatic 12 points rule in 2005, Kasia will always hold the unenviable record for receiving the joint lowest Junior Eurovision score ever. But she hasn’t let that hold her back. Immediately after the contest she competed in numerous singing competitions across Europe and also entered beauty pageants in her native Poland. She currently fronts a live music band called The Nice. Moldova: No songs submitted for national selection in first month There is no Tom Morley living in Sweden currently. If he ever moved to Sweden, he probably wasn’t here long.

The Honeypies made a brief reunion in 2007, appearing on Swedish kids show Bobster performing a song called Girl: https://youtu.be/cKMCZPsDqxg
Checking them on Facebook not too long ago, at least one of them seemed to be living in Thailand.

Latvian guy is hot tho.

For me F.Y.R Macedonia is so underrated that year. For me Ti me ne poznavas is best song from Macedonia at Junior Eurovision

This is a cute and cool idea. I hope you’ll be doing this for the other years as well.