It’s proving to be quite the day for comebacks. First Bosnia & Herzegovina, now Kaliopi. Three years after her Eurovision appearance for FYR Macedonia in Baku, the singer has confirmed that she will represent the country once more in Stockholm.

The announcement was made earlier this evening on the official Eurovision Facebook page. Click here to watch Kaliopi’s message. Just like “Crno i belo”, her 2016 entry will be composed by Romeo Grill. However, we’ll have to wait a while before we hear it. Kaliopi will present the song during a MKRTV television special in late February.

Kaliopi finished 13th in the 2012 grand final, with 71 points. She almost made her Eurovision debut for FYR Macedonia in 1996 with her entry “Samo ti”. Alas, the entry failed to progress past the pre-qualifying round.

Are you happy she’s back? Can she improve on her previous attempt? Let us know below.

Kaliopi at Eurovision in Concert 2012

FOLLOW ALL OF OUR FYR MACEDONIA EUROVISION NEWS HERE 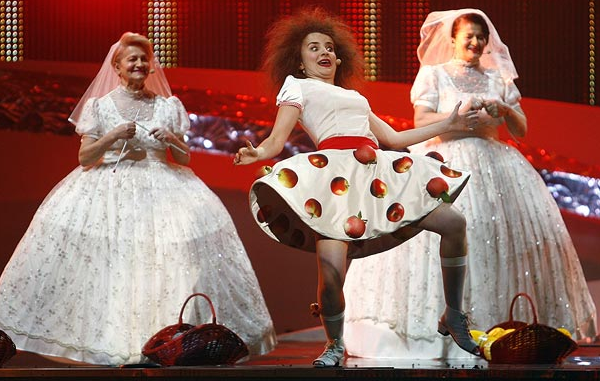 Wow, that 2012 song was . . . different. But in a good way (I guess). Look forward to hearing what they come up with for 2016. She’s obviously not afraid to do something unusual.

Kaliopi had the best performance in 2012 out of all the entrants, I think. Her song really came alive on stage and I look forward to seeing her again.

YESSS! Crno i belo (while Im not so much of a rock fan) was my absolute favourite in 2012. I hope the best for FYR Macedonia!

I hope that will not happen next year.

if she delivers a song as good as crno i belo, she can definatly win.

I am beyond excited about Kaliopi’s return and the fact Romeo Grill will be composing the entry is even better! Obviously the Macedonian broadcaster wants to do well – and with Kaliopi, they might. After all, Eurovision underdogs have been doing *extremely* well lately so why can’t Macedonia join the wagon?

Excellent choice, I say, and roll on February and Kaliopi’s (no doubt amazing) entry!

Macedonian broadcaster “who qualified for us in 2012? Kaliopi? Bring her back she needs a third chance at Eurovision”

I still do not get how Sweden beat FYR Macedonia or Spain in 2012. And I still listen Crno I Belo to this date. So, welcome back Kalilopi. I am excited!

Eh. Only my FAVORITE NON-ABBA ESC ARTIST EVER. *fans self with excitement*

“Crno i belo” was a marginal qualifier in the 2012 semis (only eight points away from 11th place). It did much better in the final, but was still only popular with eastern countries. I think Kaliopi will do better than the “Autumn Leaves” mess, but it’s going to be another niche performance.

I’m first of all suprised by the news! Happy to see FYR Macedonia betting for one of their best in their local industry. I really would love to see Elena Risteska again! I’ve got this major crush on her when she did Ninanajna back in 2006.

I’m confident that Kaliopi will do great in Sweden next year, she’s just amazing.

Crno and Belo was the best Macedonian entry in ages, so excited to have her back in my country.
As with every returning artist it’s a risky choice: They either send a not as good as the previous one, or they send a better one.
Exciting to see still!½

Now if Croatia would to confirm to..!

It’s a good day to be a Balkan Eurovision fan. Now all its left is Croatia to come back!

Oh my god yaaay!!! Crno i belo is probably my favorite macedonian entry ever. Excited to see what she will sing this year, even though it will be difficult to top her previous entry.

oh that crazy b again…..

YASSSS THE QUEEN IS BACK ! (sorry, I can’t contain my excitement) 😀

She was the best singer of ESC 2012. She has the voice of a goddess. So great to hear, that the Makedonian Queen is back to attack. maybe to win this time. She deserves it. 🙂

Btw: I love her new songs “Pozeli” and “Mojot Dom”. I hope the song will be something like them.

crno i belo was pretty cool, but returnees always bring something not-so-great to the contest imo
not to throw shade on kaliopi (favorite Macedonian entry to date) but I question her ability to outdo her old song

Such a good news! I still love “Crno i belo” and it was actually the only decent Macedonian entry of recent years in my opinion. We don’t know the song yet but Kaliopi’s great and unique voice gives a lot of hope for a good entry.

2012 was my favourite year and since then the contest has started to feel a bit flat.
First B&H make a comeback and now This 🙂
This could only get better if Turkey or Croatia return.

Can this year get even better? Most of the times eurovision returns are not that succesful, but I am lraying for FYR Macedonia!

Eurovision 2012 is my favourite year and now that Bosnia and Herzegovina and Kaliopi are back, I am amazed.

Love Kaliopi. She’ll bring Macedonia back to the final for sure!

Was not a fan of her Morticia Adams-song in 2012 but there is no denying she is talented an a huge star in FYR Macedonia. Hopefully this shows they are taking it more seriously this year after a few dismal entries in the last few years (@TIJANA)

OMG! So happy right now! She is one of my favourite Eurovision singers and her song was in my top 3 that year. Her entry was SO underrated. I hope Kaliopi’s 2016 song will be even better and she will bring Macedonia back to the finals.

P.S. 2016 year seems to be so promising and interesting.