On December 5 Israel’s Channel 2 broadcast the first episode of “The Next Star for Eurovision” — Israel’s national selection show for Eurovision 2016. Channel 2’s concessionaire “Keshet” has delivered another brilliantly polished series, which mixes together plenty of personal footage with on-stage action. The diversity of contestants is over-the-top but totally amazing: only in Israel would you find Shtar, a religious Orthodox rap group; Eliana Lubinki, a recent immigrant (‘Olah Hadasha’) from Argentina; and Kiara Duple, a drag queen (pictured at top). All of them competed and all of them qualified to the next round, along with Nofar Salman, an early favourite, and Hovi Star, who participated in season 7 of Israeli Idol.

You can watch Episode 1 of The Next Star here.

As we previously reported, the show has changed its name from “The Next Star” to “The Next Star for Eurovision”. It isn’t merely a titular change. It’s placing a more profound emphasis on the fact that the winner will represent Israel in Stockholm for Eurovision 2016. That’s a huge change from last year, when that fact was somewhat obscured throughout the season. In fact, it was barely even mentioned until the last phases of the competition.

You can feel the emphasis already. The show opened with a trip down memory lane, reliving the success of Israel’s Nadav Guedj, who dragged Israel back to the grand final for the first time since his so-called mentor Harel Skaat did in 2010. Nadav ultimately came a very respectable ninth, justifying his “Golden Boy” status.

It seems innocent enough, but this emphasis could draw Israel into the trap of trying too hard to choose “the right thing” for Eurovision. Guedj’s success on the show stemmed from the fact he was a strong performer and, to some extent, on the fact he was unaware of the scope and size of the event he was taking part in. His charm and charisma pulled him through, not the fact he could potentially appeal to Eurovision voters. 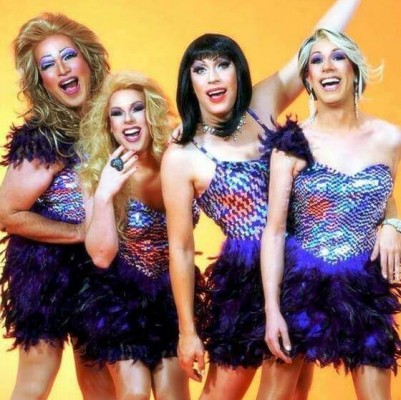 In many instances, Israel’s poor outcomes in recent competitions were the result of this precise tendency: to send someone (or going for a song) that the IBA felt Europe would like, rather than just going for someone who “had it” in Israeli terms. Catering to other people’s tastes — which is always a guessing game — is a risky business.

Is it already happening? Maybe, as seen with the success of top drag act “Pe’ot Kedoshot” (Holy Wigs), who have advanced to the next stage of the show. But we should remember: as on the X Factor, many of these early qualifiers will be eliminated soon enough.

In any case, what was your first impression of the show? Do you think it’s good that producers are emphasising the connection to Eurovision? Or would you rather they keep it on the down-low until the end? Let us hear your comments below! Drag queens can be taken seriously in ESC. To be fair, Israel were probably done in by the language. Save for the Maltese at a very far stretch (Maltese and Hebrew are Semitic languages, but are still very different) no one would be able to understand Hebrew well in Europe unless they study it or have Jewish blood (and even then might know Yiddish before). If they send a song in English they have a good chance of qualifying again. Also, with the exception of Dana, Israel is the one country that does better sending male singers.

The main news is that Israel started taking ESC seriously and that’s great.

They have had drag queens in the contest before, it’s hardly something exciting these days. Except for conservative countries no one gets shocked any more.
I don’t know why people still vote drag acts through.

One thing you can guarantee is no matter what it is it will be a massive fanwank.

The drag queen novelty thing is just so out of order …. enough is enough.
Music please?

I know you have to report about it, so I appreciated that you didn’t shy away from virtually saying that there’s nothing ‘innocent’ about that format. The show is a complete waste of time: It’s one frenetic Attention Deficit Hyperactivity Disorder spectacle where the music is a sad excuse for promoting the network’s own ‘stars’ and milking as much fake emotion and hollow cliches to achieve maximum commercial revenue and ratings. Everything is scripted at this point and there’s no authenticity whatsoever as there are no live shows planned ahead. It’s a disgrace of total lack of proportionality and self-awareness.… Read more »

Esc really needs a drag singer! …as much as the world needs war and terror! If the contest wants to dig it’s own grave – that’s the say to do it!!