She recently launched a national competition in conjunction with Vogue Ukraine to help her find the perfect Eurovision 2016 stage dress.

Now, after pouring over all the sketches, “1944” singer Jamala has narrowed the list down to just two finalists.

The breaking beats starlet will choose between costumes created by Dmitriy Kuriata, the main stylist of the STB TV channel, and Ivan Frolov, a young Ukrainian designer.

“I am very grateful to all of the Ukrainian designers who participated in the Vogue UA project and also to Dmitriy Kuriata, of the STB TV channel, who are working hard on my stage outfit for the contest,” she said.

“I’ve known Ivan Frolov for a long time and we have prepared a lot of stage dresses for my concerts.” In some ways the contest appears to be a struggle between light and dark.

This white option screams “fiery angel” and includes a skin-tight catsuit covered with a gorgeous and somewhat translucent wraparound.

It has an ethereal quality that fits Jamala’s other-wordly song. This black and grey ensemble smoulders with a dark, smokey quality that may hint at the pain and drama of her song.

It consists of flowing trousers and a dramatic cape with traditional Crimean Tartar design elements.

Jamala will not make a decision until the dress rehearsal of her semi-final.

“Only then we will understand how a dress looks on TV during the broadcast, how it correlates with stage graphics and lighting effects.”

Jamala will perform on the main stage of Globe Arena in Stockholm in a dress specially selected for the #Eurovision Song Contest 2016 as a result of Vogue UA competition. She has selected two options and will make her final decision in Stockholm after the first dress rehearsal. The choice will be made between dresses created by Dmitriy Kuriata, the main stylist of the STB TV channel, and Ivan Frolov, a young Ukrainian designer. "I am very grateful to all Ukrainian designers who participated in the Vogue UA project and also to Dmitriy Kuriata, STB TV channel that are working hard on my stage outfit for the contest," Jamala said in a statement sent to wiwibloggs. "I’ve known Ivan Frolov for a long time and we prepared a lot of stage dresses for my concerts. But dress for the Eurovision is a a very responsible thing. Therefore the final decision concerning the dress I will be wearing on stage will be made in Stockholm at the dress rehearsal of the semifinal. Only then we will understand how a dress looks on TV during the broadcasting, how it correlates with stage graphics and lighting effects.”

Jamala’s latest album “Podykh” (Breath) was released on 12 October 2015 and debuted at #2 on the Ukrainian iTunes chart. 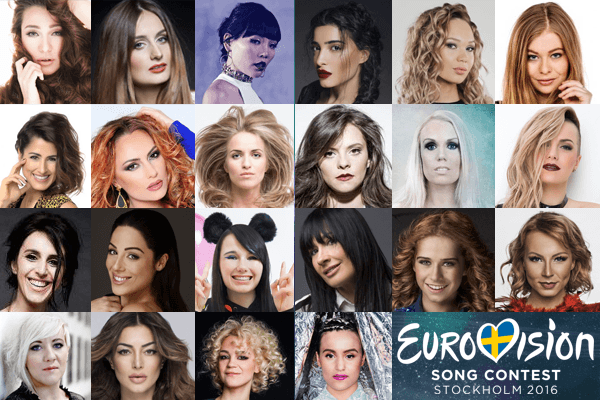 Poll: Who is the best solo female vocalist at Eurovision 2016? Wiwi Jury: Italy’s Francesca Michielin with “No Degree of Separation”

I’m tempted to go with the black one. This is a song of tragedy, and they might want to project that message in her outfit, along with whatever else they put on the stage.

White for the semi-final, and black if Ukraine qualifies.

If Jamala wants to show struggle but also a power to fight back, then go with the black one. The white one would give impression of a cry and a reserve to fate.

Black at the semi, white in the final.

What Barei said about the Hovi’s invident: When they arrived in Moscow, the airport staff make fun of Hovi because he seems gay and he had make up in his face. They register him while they laughed and then they ruined his passport even though Hovi begged them not to do it. Barei said it was embarrasing and Barei was about to make a fuss. That was the reason why then, Hovi gathered his courage and talked about LGTB in the press conference… It is incredible that a contestant of the Eurovision was treated this way. I think Russia is… Read more »

Thank you very much, but I don’t speak spanish so I didn’t understand anything! Can you please translate what exactly happened with Hovi?

The white one, but her national final one was best.

The dark one is Absolutely beautiful and exotic, it will fit well her on stage!

@georgekirkas The costume and staging are very important elements to a performance. They enhance the song and I don’t think she is paying any more attention to her outfit than anyone else.

i agree with you 🙂

for me Italy, Malta or Poland or Croatia to win, best live singers 🙂

Aw they cut my favorite 🙁

Black dress of the two left, but they’re both pretty good.

Even if she wears pyjamas or burka it’s fine lol just kidding, no seriously she shouldn’t worry too much about what she got to wear, it’s about the song the message she needs to deliver to people best of luck

I don’t like the black dress at all. Further I think that white suits her better, as we’ve already seen during the national selection.

What’s this that that are working hard on what to wear it’s not fashion show she already has a great song with beautiful message which world needs to listen not how she is going to look on stage but it looks like she is gonna risk her chance with passion for dress that can take over her mind and heart which she needs for her song only to deliver best of her. Jamala wear nirmal clothes and let people listen to your song don’t try and take their eyes for your costume and block the song

I love her dress which she weared in national round. I don’t like any of these two, but the light are better.

Maybe the black one because of burning dust or the white one because of the flame
For me the fiery white dress. It works better with the song and sound
If she shows up in the other one she will look very cool but it won’t suit it

I like both but I think I prefer the white one, because with the black one the overral image might be too heavy for the average viewer at home.
But I think I need to see the rehearsals to have a clear ideia about how they look on stage

BAREI TALKS ABOUT A HOMOPHOBIC INCIDENT WITH HOVI STAR AT THE MOSCOW AIRPORT: https://t.co/FAnNIDlo37
This is horrible… Can a country like this host a ESC in 2017? I don’t think so. #ImWithSergeyNotWithRussiaO

me too, and one of my comments at best female singer, is awaiting moderation, do you know why, i only added some videos to explain why i like my favourite 🙂

and i’m good as well, and it’s gonna be a good concert this Saturday in Malta, with Sanja, Hovi and Gabriela and Samra and Ira of course, but also Amber last year’s entry for Malta and Junior eurovision winner Destiny will be performing 🙂

I’m fine! I didn’t know, thank you for telling me! I am still looking forward to the first live performance of ”I Stand”!

The black dress all the way, it has the darkness and pain of ‘1944’! I will change the flowing trousers for a more tight ones.

Or wait, couldn’t her left side of her body wear the white dress and the left wear the black. That could be a good symbol, and everyone will be happy.

“Agnete is now disqualified from the alternative song contest, as “Mama” is no longer on Youtube, only on Spotify?” I heard that somewhere and found out that it actually isn’t on youtube. What will happen? Where are the finalists of semi final 2.

yeah it’s not a beauty pageant, it’s a song contest 😉

and this Saturday in the Xarabank in Malta, there will be Hovi Star, Sanja Vucic, Gabriela Guncikova and Samra Rahimli will be performing as well as Ira of course, and last year’s entry Amber and Junior eurovision winner Destiny 🙂 🙂

sounds a lot of fun 🙂

The white dress. It speaks to the hope in the song, rather than the song’s darkness.

Either would work fine. Or both. 😀
It’s the singing that will matter more.

no, you’re right about that

and how are you doing, and have you heard that Gabriela will be at the Xarabank in Malta, and she’ll meet Ira as well 🙂

@georgekirkas Jamala is paying so much attention to it cause show is being developed by stand-alone ukrainian team of 3D artists, here is one of their works https://www.youtube.com/watch?v=oOtqbAxRkyM

The black one for sure.

I like both of them, but why is Jamala paying so much attention to the dress? It’s definitely not a very important part of the show!

What’s with all those over-the-top outfits? I see these two as really ugly ones.

Why not have both and a dramatic dress change??

For me with this song suits black one.

they are really original, extremely I would say, this could turn into one of the bests dresses in eurovision history or one of the most awful winners of the Barbara Dex award!

i didn’t see these dresses in previous wiwi article… are they new?

great designs! between these 2, i love the black design better. you can never go wrong with black. but it looks similar to greta’s tho. 🙁

The dark outfit is a tad predictable so I’d go with the white.

the dark dress, lovely goth dress and it can suit the song perfectly i guess 10/10

the white dress, beautiful and elegant, well it doesn’t suit the song 6.5/10