Ruth Lorenzo is a woman of many virtues — and one of them is keeping her word. In a recent interview with RNE’s ‘No es un día cualquiera’, the Spanish songstress reaffirmed her will to wave her country’s flag at Eurovision 2017 in Kyiv!

Ruth’s promise has been on Eurofan minds ever since the summer of 2014.

Right after her stunning performance at Eurovision, she appeared on RTVE and stated publicly that she was riding on a high and was still amazed by the experience. She also promised to come back in three years. That means 2017 should be her time, as we pointed out some weeks ago.

During the recent interview on RNE, Ruth was joined by RTVE’s commentator, José María íñigo (yes, he who feels “too lazy” to go to Eurovision in Ukraine), and they reminisced over their time in Copenhagen.

The singer said that her favourite moments came during the bus trips to the arena with her crew, when they had fun and relaxed a bit before she hit the stage at B&W Hallerne.

Back in May, he was not so sure. But in this more recent interview he seemed quite ready to take the job for the sixth year in a row (although he had one more gaffe and said that Eurovision was going to be held in Armenia and not in Ukraine, but weeeeell, he’s already in his 70s, so we’ll let that slide).

At the end of the day, Ruth is ready and we are more than ready to have her back. Our bodies need this. It’s worth pointing out that our girl is recording her second album, which should be released in 2017, after she finishes her “Tour Voces 2016” later this year.

Ruth has plenty of songs to choose from, explaining that she’s currently sifting through over 50 songs, and that she has divided them into categories to pick from for the album: her favourites, the decent fillers and the “less interesting”.

Will Spain’s Eurovision song for 2017 be amongst Ruth’s favourites? Only time will tell! Meanwhile, let’s remember what this lady can do on a Eurovision stage:

Ruth has been on everybody’s mind from the moment Barei left the stage in Stockholm. But what do you think about her comeback? Will she be able to surpass her 10th place finish with “Dancing in the rain”? 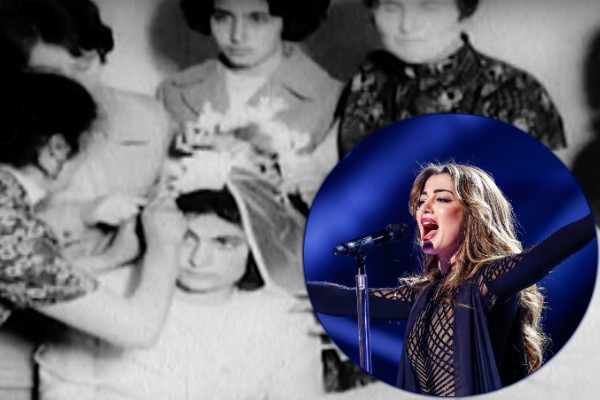 I Do! Iveta Mukuchyan serves Armenian bridal realness in “Hars”

I hope so much that ESC participants will stop worshiping swedish composers, they are not that good, look at Lithuania who was hoping to win, or Moldova’s Lidia Isac with Falling stars. Spain will not do well with that formula : Ruth + swedish song. In my opinion, Spain will do well when will stop trying to please everybody. I like Tamara Valcarcel and her ballads, because she is natural with ballads. And after all, why ESC fans don’t like ballads. Really, why? Is it because those song are danced in pairs and it feels like highschool ?

She hasn’t got any single hit yet here in Spain. As far as I’m concerned Ruth is working with Swedish writers and producers.. so we know what to expect xD.
Spain needs something upbeat and radiofriendly

Pls no, she is the worst.

Bring back Ruth and Brequette!

Be nice to have Spain do well again!

@(J)ESC Fanatic: At least you understood my shade surrounding the “b” word lol

LOL! I’m a Eurovision fan and I love ballads…

Her voice is amazing, so why not? It would be great if she came back with another stunning song as well. “Dancing In The Rain” slays and let rock fans hate!

Sorry, I couldn’t stand Ruth 2 years ago – all she did was stand there and scream the words “the rain” most of the time!

YAAASSS! She’s really talented and every single song of Ruth is a hit. Let’s try again with some rock opera, she can ’cause she rules!

I wish this woman and her deluded fans would just go away, as if it wasn’t bad enough they cost Spain the opportunity to get a much better result with Brequette in Copenhagen, instead of her cliched wailing.

Never liked Ruth or her song, move over let someone else have a try in my opinion…

Let the hype start … and by the time her chosen entry gets picked … a lot of disappointments will also start … the second time around flop syndrome is a very common thing in Eurovision. There is no way Ruth will have her new song smashed by criticism due to comparisons with Dancing In The Rain. Specially if she comes with another ballad … we all know what ESC fans think of ballads ..

Ruth is super-talented singer and such a lovely woman. I hope to see her comeback soon. While waiting keep on dancing in the rain. 😀

Why hasn’t Italy announced their participation yet :((
I’m worried…

Everybody love ESC and when upset, changes his/her’s mind in the end. The hope begins again for each country. Don’t know what is right for Spain, maybe be yourdelf and sing in native language. Even a ballad, but make it THE BALLAD no matter what.

She was my favourite in 2014. Ever since “Dancing In The Rain” came out, I’ve been coming back to listen to it at least once a week.

That begin said, I have mixed feelings about her possibly returning in 2017. Considering Spain’s track record and the fact that Ruth barely managed Top 10, I worry that she’ll end up placing much lower like most returning acts do. If she were to return, she has to return with a song that screams “Top 3 or 5 no questions”. Anything less, forget it.

Ruth goes much beyond Swedish crafted ballads, take a look at her song Burn. If I’m not mistaken, she mentioned in 2014 that she would like to come back with a rock song 🙂

But with a song completely different than “Dancing in the rain”, it was ok, but she has enough talent for doing in the stage more than a disney ballad…

if she has the right song I would be really happy that she represents my country again, she is a hard-worker woman and she has a huge voice and tage presence, I don’t know what you are complaining about

PLEASE no….not another OTT cliched euroballad…with Swedish song writers! So boring, contrived, and unoriginal. Just a cliche. Bring us something genuinely Spanish. Interesting music. Some rock in Spanish. Why not the biggest Spanish rock band or something? Would be WAY more interesting and recidble….!

I wouldn’t be against seeing Ruth Lorenzo back, she has a great voice and with the right song and effort on the staging she could do very well. I’d like to see Spain host a modern Eurovision, I’m sure either Madrid, Barcelona or Valencia would be great host cities, after visiting all 3, I am
Sure of it.
Best of luck Ruth, hope it’s something modern, upbeat but typically Spanish.

No, no, no! We don’t want Ruth again. Let others have a try, she had her chance.