He is the artist who was internally selected by ORF to represent Austria at Eurovision 2017. Now just days before Nathan Trent‘s self-written Eurovision entry is due to released, the title of the song has been revealed. Nathan will sing “Running on Air” in Kyiv.

Nathan hasn’t dropped any hints about his song, but several sources, including Austrian newspaper Der Standard, are reporting that the title of Austria’s Eurovision 2017 entry will be “Running on Air”. At the end of January, Nathan revealed that he had written the song himself — and that’s all we know for now.

But we won’t need to wait for long to actually hear the song. The song will be presented on the morning show of Ö3 — ORF’s radio station — on Tuesday, February 28. There is a chance that the single will also drop on Spotify at midnight, so keep your eyes on that as well.

While being busy preparing for Eurovision, Nathan had some time to grab a very glam selfie with Austria’s latest Eurovision singer Zoë at the legendary Vienna Opera Ball. It’s the same event the event San Marino’s Michele Perniola and Anita Simoncini also attended in their Eurovision 2015 postcard.

Back in December, Nathan was announced as Austria’s pick for Eurovision 2017. Nathan was also one of the 33 acts shortlisted for Germany’s Unser Song 2017. But after being selected by ORF, he withdrew from the German selection.

After having poor results at Eurovision, Austria made a spectacular comeback in 2014 when the bearded diva Conchita Wurst won with “Rise Like a Phoenix”. In 2015, The Makemakes did the complete opposite, scoring the dreaded nil points with “I’m Yours”. In Stockholm, Zoë made good with the delightful “Loin d’ici”.

And now it’s Nathan Trent’s turn. In May he will take to the stage in Kyiv with “Running on Air” and Austria will again hope that he can win over Europe for a spot in the grand final.

Are you looking forward to hearing “Running On Air”? What are your expectations? Tell us in the comments below or via our app! 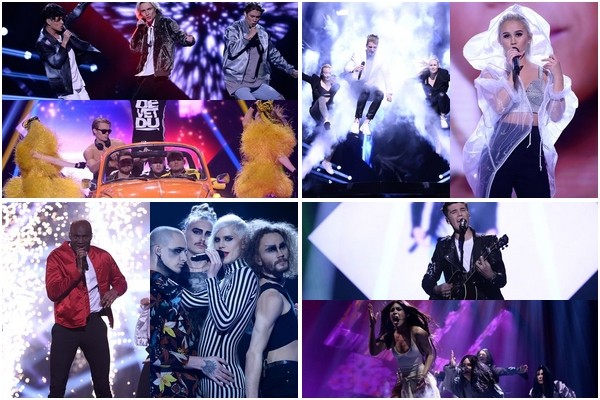 Melodifestivalen 2017: Who should win each Andra Chansen duel? There are actually undoubtedly a good deal of details like that to take into consideration. Which is a terrific point to bring up. I supply the thoughts above as general inspiration but clearly you can find questions like the one you bring up where by far the most vital factor might be operating in honest very good faith. I don?t know if greatest practices have emerged about items like that, but I am positive that your job is clearly identified as a fair game. Both boys and girls feel the impact of just a moment’s pleasure, for the rest of… Read more »

“Walking On Air” is probably a good song, although derivative of 1990s-era American pop, although then again, what Eurovision song these days isn’t? 😉 It’s definitely a better attempt, however, than the disjointed, gag-inducing “Do It For Your Lover”!

Come on guys, there is a youtube on internet since yesterday already:

A part of me understands that it’s about the suspense, but the other part is so frustrated! Why do they reveal the title and let us wait until the reveal of the song a few days later?
And it’s not about Austria. Several countries did it this year.
The title doesn’t seem a ballad (you never know).

Israel has revealed their song title too.
Imri Ziv will represent Israel wih the song “I Feel Alive” written By Dolev Ram and Penn Hazot. The song presentation will be on March 9th.

Since I knew Nathan would represent Austria this year, I’ve been very excited for this entry.

The song title sounds nice, so I really hope it will be great.

keeping my expectation low for this fella. hopefully he would surprise us with his song come february 28th.

I am super excited. Nathan’s previous and only single, Like It Is, is fresh, catchy, well produced, with smart lyrics and a good bop, and it was written by him. So if that is anything to go by, I expect something similar.

Awesome he wrote the song. All my respects. I hope it’ll be good 🙂

Let’s just hope that the air won’t get too thin for him up there, like for Ira when her walking on water became water under the bridge.
I’m not expecting anything from my country’s pick, so this can only be a good surprise, if against all odds it turns out to be something decent. 😛
I already fear about really awful lyrics, though.

I hope it’s not something bland, can’t wait <3

Dihaj will sing ‘Always’ in Eurovision.ITV selected this song out of 30 songs which were submitted.

Love the winter we see in the picture, he must keep the season winter for staging because is so Austria. Actually I saw a version of Zoe Loin d’ici with all seasons staging and I thought winter looked better.
https://www.youtube.com/watch?v=7Vbdr9H34ZA

It sounds like a midtempo pop blandness like Do It For Your Lover.
But maybe it is a captivating, ecstatic piece of art that sets the crowds on fire.

I really hope it won’t be another ballad!!!!

I have a feeling that lyrics will make us cringe.

From “Walk On Water” to “Running On Air”…..many singers must have some supernatural abilities in ESC these days 🙂

Btw….Running On Air is a good title from a real ski jump nation 🙂

Meh, whatever. Bring back Zoe! Knowing his repertoire, it’s easy to guess what he’ll be singing…not expecting very much.

I’m so excited. I hope the song is great 🙂

Cannot wait for it <3 The 28th is Tuesday though 😉