The country’s national broadcaster – Radio Vaticana – is an active member of the EBU, and therefore is eligible to participate in Eurovision. However, they claim not to be interested in the contest, as their channel is purely dedicated to the broadcast of religious material. Well, we at wiwibloggs think that their programme catalogue is in need of a serious makeover, and first and foremost is the addition of Eurovision. Here are ten reasons why the Vatican should sacrifice two hours of operatic hymns to participate in Eurovision 2018.

1. Because our favourite religious-themed acts never made it to Eurovision

In recent national selections, the likes of The Ekklesia Sisters in Malta, and Die Preister and Gregorian in Germany failed to make it to Eurovision. Even Swiss entrants Heilsarmee had to radically change their name to Takasa to hide their Christian roots. If Eurovision is all about diversity, why isn’t there a space for the clergy to show up and show out?

2. Because we still haven’t heard Latin at Eurovision

Vatican City is the only country in the world where Latin is used as an official language. And considering Ukraine is bringing the contest back to Kiev this year after debuting Crimean Tatar to the contest, who knows what Latin could do for the Vatican. Eurovision 2019 in St. Peter’s Basilica anyone?

3. Because we are yet to see Pope Francis drop some phatt bass

4. Because Suor Cristina needs to get to Eurovision ASAP

She is Italian. She is a nun. She sings. She slays. Enough said.

5. Because if Vatican City participates, there’s only 2 to go

A participation would leave Liechtenstein and Kazakhstan the only two European countries never to have competed in the contest. One step closer to world domination, baby.

6. Because we need an outlet for upcoming Italian artists

It’s about time Italy’s hidden gems stop being neglected – how else will we see our favourite pug-loving soul singer on the big stage?

7. Because they can afford it

In 2015, it was reported that sixty percent of the millions of euros donated to the Vatican “went into Vatican coffers.” At wiwibloggs we are strongly against corruption. And whilst Eurovision may not be helping out the poor catholic community, it’s certainly better than paying for a nun’s swanky new bling.

8. Because Switzerland needs a voting friend

And those Swiss guards would make some sexy backing dancers.

9. Because Vatican City is home to one of the oldest bands in the world

The Sistine Chapel Choir formed in 1417, but only in 2015 did they record their first album. The choir even features thirty boys: who knows, Vatican City could send a slick new boy band to rival San Marino’s Peppermints at Junior Eurovision (assuming the EBU forgives them for chopping their balls off).

Sorry I couldn’t think of a tenth one but I wanted a round number. Nine isn’t as sexy, and God is watching.

Unfortunately this article must end with bad news. Recently a fan asked the official broadcaster whether they had plans for Eurovision 2018, and they responded with a pretty clear “no”.

“No, definitely not,” their response reads. “Not our style, I’m afraid.” 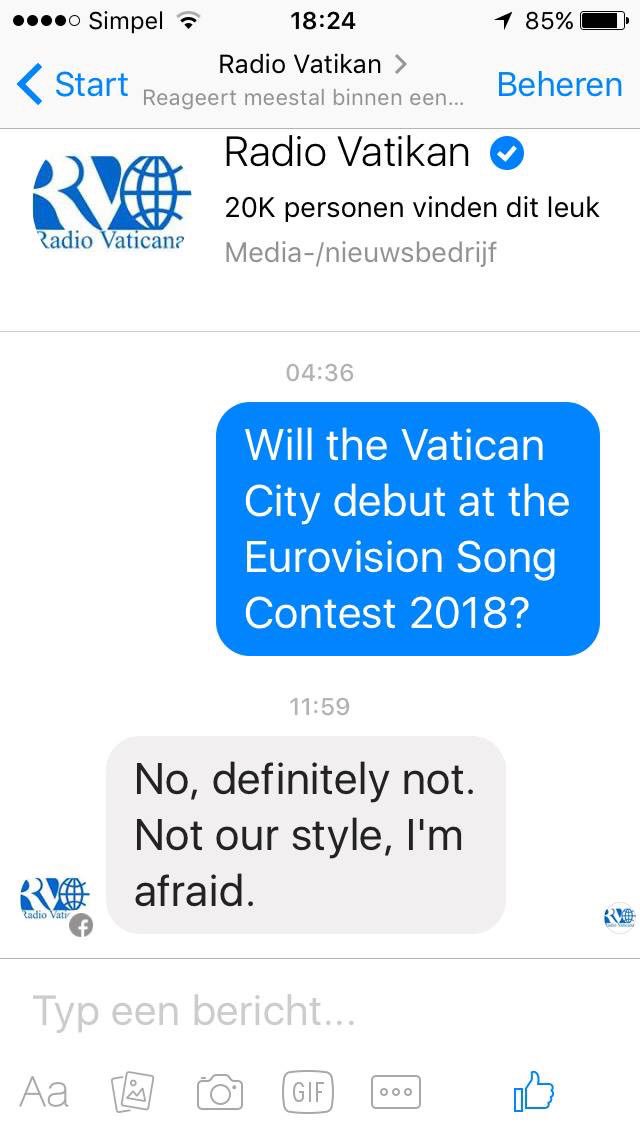 What do you think? Could they? Should they? Would they? Leave your comments in the box below! 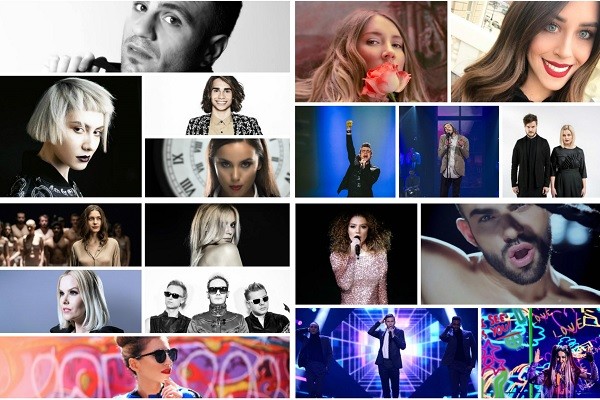 Poll: Who should win the first semi-final of Eurovision 2017?

@Charles: Out of the 43 songs in this year’s Eurovision selection, how many of them are openly about an LGBT attraction or relationship? I count one (Montenegro), but feel free to debate that. I agree with you that the fan base does obssess with “us v. Russia,” but the politics go wayyyy beyond just LGBT issues alone. Perhaps a better way of putting would be to say that there are too much politics in Eurovision. Ditch country identities – have a contest between songwriter names only: only THEN would the contest be truly focussed on the music.

… because the LGBT and the Vatican will bring in even more controversy into what is already the annual LGBT vs. Russia saga? Because Russia alone is not homophobic enough, let’s bring the main spot where Catholic homophobia shines brighter than ever. Is even anybody honestly just thinking of the music input? Or am I supposed to feel that nobody cares?

@The Orinoco Child I doubt Valentina is a multi-millionaire, but why do you think they keep selecting Ralph Siegel to write their song? Because it’s clearly NOT for his songwriting abilities…

Sure! That’d be cool!

Omg wish this could happen but probs never will. Also I didnt know valentina Moneta was a multi millionaire.

I would extremely love for them to participate as they are rich in history and culture and would provide new musical style. However, the rules regarding religious affiliation (Takasa name change) should be re-defined and had Vatican won, Europe should know better than to send semi-naked performers dipped in glitter and tacky drag acts (note: I said tacky drag acts, not transgender people). Vatican is a world much more conservative and philosophical. But a song in Italian or Latin about celebrating life would be so awesome!

@Bart Smits would love to see the full conversation!

Let’s all send this artical to the Vatican broadcaster through Facebook etc. and try to convince them! (I tried once before, not that succesfull)

The chat was a little longer then that

Not happening…how about getting Kazakhstan full membership and they send Dimash! There’s someone who will slay! Check this out: https://www.youtube.com/watch?v=sBT43YVwcjA

I’m sure if you took the question to Pope Francis directly he’d be up for it, he’s cool like that.

There is a bigger chance of Kazakstan debuting than the Vatican competing. The Vatican would never do it, their business is religion
That said, it would be fun to see their lighter side. A choir of nuns and priests singing about love to the eternal one?

If I’m not mistaken religious acts are forbidden in Eurovision though. (I know many singers sang about God before but still.)

What they could do is send and support songs for the national selections of countries that have catholic church segments of population.
It would probably be something similar to Croatia 2013 participation of Klapa s Mora. Wasn’t much appreciated and it gathered a broad consensus that it was ‘meh’.

A really inspired article by Edd! It made my day! I don’t think the Vatican city will ever participate. It’s the base of the Catholic Church. They are “purely dedicated to… religious material”. It’s not like the other countries. Personally, I wouldn’t like to see them participating. However, I loved the article! “We haven’t heard latin?” That was good! “Because we said so and we slay”: a great 10th reason! You are very determined @William Lee Adams! We want the Vatican city at ESC! Period! As for Sister Cristina, she could participate with Italy. But they have Sanremo, she has… Read more »

Whatever their style is, they can still participate.
Celebrate Diversity!
Who said that you must have a certain style?

I didn’t realize the problems with the Italian selection.

So, all the artists from San Marino are billionaires? Interesting.

@fikri maybe Italy is going to do that in 2018 or when they are going to win.

Thank you for the article, Edd. It has made my rainy day a little brighter. 🙂

What about that Padre Damian guy? Bella and filippa were Christian enough??

Really? Have you ever been to a catholic Sunday mass? It’s pretty much like Eurovision – just a little more flamboyant.

I’m not religious but I’d love the Vatican to participate with Sister Cristina. I wouldn’t be here for their homophobic jury, though.

1. Kazakhstan is pretty much an Asian country.
2. I wouldn’t be happy to see the Vatican City compete.

“BECAUSE WE SAID SO AND WE SLAY.”

It will never happen.

@zorz, since when is Israel, Azerbaijan etc European countries.

What a nice joke, but I’m sure Vatican would never send a sister to the Eurovision.

Since when is Kazakhstan a European Country?

Lol I take this as a joke, and I must say its a good one!

maybe invite them for an interval act first?