With his new beard frontman Calin Goia is almost unrecognisable in the video. But as you’ll see, that’s the least of his problems.

The song, whose title is a play on the word “hypnotised”, is a far cry from “De la capat” — the sensitive song about the migrant children left behind in Romania.

“Cred ca-s hip” tells the story of a man who is obsessed with the sound of a woman’s heels on the floor, which make his heart beat faster.

The lyrics are amusing, albeit somewhat predatory.

“I think I’m hyp-hyp-hyp, hypnotised/When I hear heels I turn my head immediately/If I make a mistake it won’t be my fault/I turn my head after you/And I say whatever I think/Anything to not let go/Such a perfect body.”

They choice of visuals is equally baffling. Members of both Votaj and Noaptea Tarziu are hospitalised in a mental institution filled with highly sexualised nurses who tease and entice them. While we didn’t expect better from director Alex Ceausu (who was behind the video for “Miracle”, which was accused of plagiarism), we expected better from Voltaj.

The questionable humour of the video put a strain on Calin Goia. He admitted that the time he spent hanging from a tree gave him muscle soreness for one week, “but it was worth it”. Indeed, the video has amassed more than a half a million views in two weeks, so apparently the joke caught on.

Speaking of Calin, it is the first video where he has showed off his new beard, which makes him almost unrecognisable. The jury’s still out whether it’s a good choice to leave the goatee for a full-on beard. What do you think?

And what about “Cred ca-s hip”? Are we too harsh or were Voltaj ill-advised in making song and video? Sound off below! 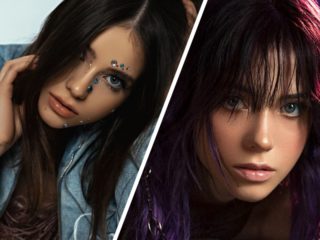 They’re childish and silly. In one word: Awful…

I can’t stand them! And I’m Romanian… Most of us disliked them back in 2015 for being chosen as our representatives. The head of the delegation from 2014 and 2015 (Lian Stanciu) was a good friend of them so most definitely she ease their participation and their eventual winning. The obvious choise was Luminita Anghel’s “A million stars”, a song still played by us, the Romanian Eurofans. But she lost due to the corrupted jury that year and to the HOD meddling into the televote. Voltaj’s poor and even emberassing social campain that year (for the Romanian partents working in… Read more »

Dirt. Voltaj go home, youre drunk! Not funny at all.